Pakistan socialist Baba Jan has been in prison since September for the ‘crime’ of helping farmers fight for compensation for flood damage. He and other prisoners have been repeatedly beaten and tortured, and are denied visitors and medical care. Join us in demanding justice for these climate activists. 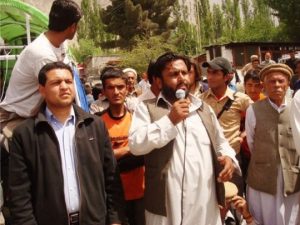 Baba Jan speaking at a demonstration for flood victims.

Baba Jan. a federal committee member of the Labour Party Pakistan (LPP), was among the first to raise the issue of Atta Abad Lake flood victims. He toured Pakistan in 2011 to organise rallies and demonstrations to highlight the plight of villagers who have lost their homes to this newly formed lake caused by deforestation, soil erosion and climate change. He spoke to the national media in press conferences held in Lahore, Karachi and Islamabad.

The corporate media finally took up the issue and some compensation was paid to the victims, however a new movement began to urge compensation for all affected, as some had not been compensated. In July, police opened fire a protest rally, killing two people.

Instead of arresting the officers involved in the deaths, police laid fabricated charges against Baba Jan. He has been in jail since, and has been repeatedly beaten and tortured.

Pakistan supporters of Baba Jan have appealed for international support. Please send emails and letters similar to the one below to the Embassy or High Commission for Pakistan in your country immediately.

We have been informed by the Labour Party of Pakistan that Baba Jan, Waqar and other activists in Gilgit district jail were severely beaten and tortured by dozens of Rangers, Police and Frontier Constabulary in the early morning of April 28, 2012.

We are especially concerned for the fate of Baba Jan, who was taken from the Gilgit district jail by security personnel and transported to a place unknown.

We strongly protest against this violence and object to the prison authorities’ ban on visitors to these political activists. It appears that the responsible authorities have failed in their duty to maintain safe custody of these prisoners. This kind of treatment of political activists is intolerable in a democratic Pakistan.

Please pass on to your government our urgent call for the immediate release of Baba Jan, Waqar and all other activists from custody, and for lifting  the ban by Gilgit district jail authorities on vistors to these activists. Further, please determine and advise us of the location of Baba Jan and any others taken from Gilgit district jail.

The Gilgit district jail authorities should publicly indicate the health status of each of Baba Jan, Waqar and the other activists. They are considered to be in dire need of medical assistance, something the authorities should facilitate. We request that they be immediately released and be promptly transferred to hospital if necessary.

We are extremely anxious for the safety of the above persons, and wish to learn their legal and health status as soon as possible.

A very broad layer of people around the world is concerned about the fate of Baba Jan and his fellow activists, who are political casualties of the deepening global climate change crisis. They have been imprisoned for their roles in the campaign by poor local residents who were demanding compensation for the devastating landslide and flood in the Hunza Valley in 2010.

International flood relief campaigns for Pakistan have also increased public awareness of the situation. The success of future emergency appeals could be compromised if there were serious concerns that the victims of flooding and their advocates are being mistreated by Pakistani officials at any level of government.

We urge the Government of Pakistan to act immediately on this issue.