Socialism cannot just take over capitalist production and manage it better. The production process itself needs to be radically critiqued, reconceived, overthrown and transformed by the working people themselves, while still maintaining and developing a working economy.

Mike Ely is founder and editor of the Kasama Project, a website and network devoted to building a communist movement in the United States. While most of the participants come from Maoist backgrounds, the discussions on Kasama are refreshingly open and non-sectarian.

The essay below reflects Kasama’s stated desire to “promote new theoretical explorations and thinking – within a left that is too often on autopilot.” It deserves careful consideration (and discussion) by ecosocialists.

Published on Kasama on April 24 and posted here with the author’s permission.

REVOLUTIONIZING PRODUCTION ITSELF:
FOR HUMANITY AND FOR THE WORLD

There is a valuable exchange happening on Kasama between Keith and Stephanie. I won’t try to encapsulate it here, but want to respond to it.

I think there are some sharp contradictions here — that are posed within our theory, and within the very choices facing people.

A horizon beyond scarcity and inequality

First: Human beings have suffered, bitterly, from poverty and scarcity. Being dirt poor is awful. Watching your children go hungry and even starving before your eyes is unbearable — or watching a newborn die of dehydration from bad water. Seeing a world of goods, inventions and travel, and yet being pinned (by endless grinding poverty) in dead-end, repetitive, unrewarding labor is maddening — especially when for literally billions of people there seems no way out.

Second: Modern productive capacity allows (for the first time in history) a society of common abundance. Previously poverty and starvation were a result of human helplessness in the face of the natural world — our once-limited ability to triumph over rocky ground, or hurricane devastation, or infection, or drought.

Now however, the continued existence of hunger and poverty is a result of the current outrageous and unjust structure of human class society — the existence of class society itself is the cause of the difficult life of the vast majority of humanity. Something else is now possible (a mutual flourishing, radically new forms of egalitarianism, a radical redirecting of social surpluses toward actually solving the vast historic problems of the people around the world). 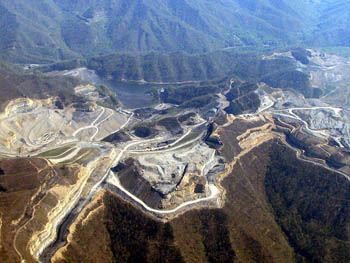 The existence of mountain topping is tied to capitalist production and capitalist logic and capitalist decisions. Production (its form, its impact, even its physical engineering) is deeply marked by the class society it emerges within.

Third: The form of modern production (and consumption) are themselves deeply marked by the class nature of the societies that produced them. It is not just that the surplus of production is alienated from the exploited (by the owners of capital). The whole process of production (its forms, its inputs, its purpose, its outputs, its impacts, its physical engineering, its social constructs of hierarchy and punishments) is marked by the class society within which it emerged.

And this is deeply important for understanding how socialist sustainability will also need to revolutionize the inherited patterns of production and consumption.

One of the major contributions of the Great Proletarian Cultural Revolution was the insight that the very form of production is itself marked with capitalist or communist directions.

• the very architecture of capitalist factories assumes a specific form of hierarchy — and obstructs different, socialist/communist relations IN production.

In revolutionary China, factories, docks, shipyards, agricultural villages had to be build differently (with meeting rooms, and open spaces, cafeterias, and structural redundancies to allow the workers to actually participate in their own supposed “rule” over society.)

• The very nature of capitalist assembly lines often assumes that workers are merely cogs in the process (and will not be meeting off and on to make decisions). And it is commonly structured to assume that “work life” for the workers is repetitive, uncreative, and subordinate. Just think through how a textile mill in Bangla Desh would have to be built differently to better serve society’s revolutionary transformation. (Would there be day care centers? an attached college? A side industry for processing link and toxic waste? platforms for public speaking in the production buildings?)

The class nature is most obvious in the social structures of capitalist production (hierarchy, enforced obedience, threat of firing, experts in command, managers trained in capitalist efficiency, “attention to the bottom line,” reproduction of “the color line,” inherent separations between plant and community, between work and education, the assumptions of “commuting,” the functioning of rotating shifts, etc. etc.)

But you don’t get far into a socialist revolution without realizing that class nature is also embedded in how machines are designed, or the assumptions of inherited processes. The production we inherit is itself (including physically) shaped by class society. And here we have been discussing the accumulating environmental impact of capitalist production (and the parallel crime of continuing such capitalist methods and assumptions in most previously socialist societies.)

• The fact that there are high communications among managers in industry, but little cross communication among farmers in the fields says a lot about how decisions are made, by whom and for what.

The example of coal

Let me take something  I know  about:

The early communist Karl Marx wrote, “Even a whole society, a nation, or even all simultaneously existing societies taken together, are not the owners of the globe. They are only its possessors, its usufructuaries, and, like boni patres familias, they must hand it down to succeeding generations in an improved condition.” [Usufructuraries are those that harvest the fruits of what ultimately belongs to someone else. It is a nineteenth century legal word that captures some of what we now mean by “sustainable.”]

Again: this was expressed in “how the mines were run” (i.e. what the processes were, how the bosses were trained, what was considered “safe,” what specific decisions were made.) — but it was also embedded in the very nature of the production process, which had developed and morphed for a century under capitalism.

It’s not as if socialist society will simply “take over” the production processes inherited from capitalism, and use them to produce goods and surplus that we will now direct. The production itself has a class character.

And further: There are whole branches of industry whose expansion and even existence reflects the decisions of capitalism. The ruling class of the Eisenhower years (emerging from WW2, with the U.S. controlling “cheap gas” from the Middle East) decided to build a highway system with suburban sprawl (not a rail system, not compact cities).

It was not just the profit making out of that process that was capitalist — the whole structuring of society, the very products being built, reflected capitalism’s values and priorities (including racism and white flight).

A socialist society has to critique and transform

The whole way energy is produced and used in the U.S. is rooted in profound waste (and disregard for humanity’s future needs). The U.S. has long used (roughly) twice the BTU per capita compared to imperialist Europe (with a comparable lifestyle).

Coal in the U.S. used to serve the railroads (as fuel) and steel (as coking components) — now it is powdered and fed into power plants (in the main). It is not just the conditions of production that are marked by capitalist decisions and priorities, but the purpose of production, and the modes of consumption for various commodities, etc.

Communists have often written that we can’t just “lay our hands” on the existing state, and then use it to our purposes.

Something similar is true about production — we can’t simply “lay our hands” on this society’s productive apparatus and use it (unchanged) for our purposes. The production process itself needs to be radically critiqued, reconceived, overthrown and transformed — by the working people themselves, while still maintaining and developing a working economy.

In the theory produced during the cultural revolution, it was said (by the revolutionaries among the communists) that the class nature of a production process was determined on three levels:

This is very different from the older, previous, orthodoxies among communists — who thought (one-sidedly, even naively) that stateownership settles the socialist character of production. In contrast, the communists during the GPCR said both that we had to see if the “ownership by the whole people” (through state ownership) is real or fake — i.e. who owns the state in a sweeping sense? Is the state (at its heights) still a revolutionary stronghold of ongoing communist transformation?

But beyond that, they argued that ownership alone (even by a genuinedly socialist state) did not guarantee socialist relations of production — and that it was important to see how local production itself functioned (what line is in command), and what larger purposes the distribution of commodities served. This is quite a radical view — and provides an new emerging response to the  forces (including anarchists and the theorist Charles Bettleheim) who have long argued of “workers control” at the factory level is key to maintaining genuine and ongoing revolutionary transformation.

We need to look at more than just how the production process is owned, (i.e. not merely where its surplus goes), but also what it produces, how it is produced, what it serves in the largest senses.

Rudolf Bahro once said (paraphrasing): “Schiller only went to Rome once in his lifetime, but it was memorable. Why does every manager in Germany need to go to Sri Lankan or North African beaches every winter?”

Similarly, the fact that we can buy orchids (or cocaine) from Colombia in every neighborhood, or that fruits are flown in (regardless of their local growing season) is tied to imperialism. there is nothing morally wrong with eating a banana every day — but there is a problem with a structure of world relations that delivers a banana to every grocery store in the U.S. every day — and that makes the distant produce non-exotic.

I don’t know the details of what a socialist North America would look like (what BTU levels would be possible without ripping off the world, what fruits and diet would look like once we shifted to bio-regionalism, what a reduced “carbon footprint” does to the price of beef and its level of consumption). But I can’t imagine that revolution will not mean major changes — and not just because revolution is temporarily disruptive of highly complex circuits of trade. (Eric’s point recently about Carl’s seeming incapable of imagining Greece with a transformed new economic life, speaks to this). And it is related to the question “what do Guatemala and Puerto Rico look like if they are not dominated by the U.S. — and its cheap mechanized grain, and its decisions from the heights of finance and capital?”

Yes, (to return to my opening point), we have a major task providing abundance to people who are (today!) starving, undernourished, separated from clean water and health care, under-educated, economically marginalized, cut off from information and communication etc.

I have in my mind the picture of a young girl from the hill country of southern Asia, spending her days hauling water from the river to her village, about to be sucked into the maw of sexual slavery in some urban district — if our revolution doesn’t change her choices and her village, then it is no revolution at all.

In some ways, the great power of the productive forces (created so explosively under capitalism) will make this possible in a literally unprecedented way. (What would it mean to young women to have water pumps in such villages, to free their time, and to make their now irrigated fields more productive? What would it mean if surpluses on a world scale didn’t just leave such regions, but create development that served them?)

But at the same time communist revolution will (of necessity) radically transform and restructure that production (its methods, its purposes, its outputs, its geographical distribution, its impact) — or else the revolution will neither be communist nor liberation.