Baba Jan and Iftikhar Hussain are being held and tortured by Pakistan police, for the crime of aiding flood-stricken farmers. Your solidarity with these brave political prisoners of the global climate change crisis is urgently needed now.

Climate and Capitalism has written previously (here and here) about the case of Baba Jan and his comrades, who have been imprisoned and tortured in Pakistan for supporting peasant demands for compensation following intense flooding. As the following letter explains, the situation has become more desperate. We encourage C&C readers to respond to this call for support and solidarity.

UPDATE, JULY 24. Peter Boyle writes: Thanks to all who sent protest messages and got the word out quick. Baba Jan and Iftikhar Hussain have been returned to jail after being interrogated and roughed up by the special interrogation team. But we we stil mustl demand: Free Baba Jan and Free the Hunza Five! 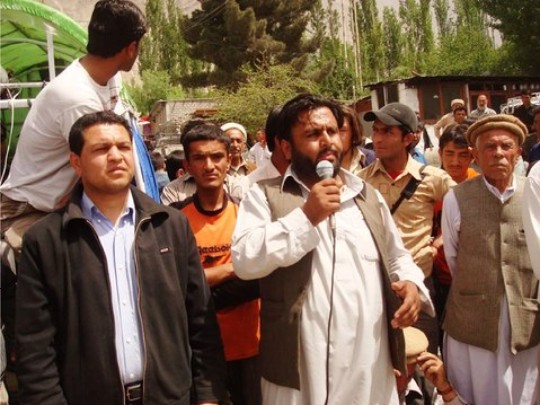 Baba Jan speaking at a demonstration for flood victims.

Baba Jan and four comrades — all members of the Labour Party Pakistan (LPP) and the Progressive Youth Front (PYF) — have been imprisoned since September last year for standing up for the rights of his people from the Hunza Valley, in the remote province of Gilgit-Baltistan, after their villages and farmlands were flooded in 2010. Collectively they have come to be known as the Hunza Five.

The Hunza Five are among a growing number of those who could be termed “political prisoners of the global climate crisis.”

In 2010, one fifth of Pakistan was flooded after extremely heavy monsoonal rains. Two thousand people died as a result of this extreme weather event and 20 million people suffered displacement and/or destruction of property, livelihood and infrastructure. People around the world donated millions of dollars in emergency aid but not all of that aid got to the real victioms of the devastating floods.

Baba Jan and his comrades were arrested for leading protests of victims of flooding who had been cheated of compensation and assistance by corrupt officials. The Hunza Five have been assaulted, tortured and denied their rigts (including visiting rights and medical treatment) during their imprisonment.

There has been an international campaign of solidarity and here in Australia and we organised for numerous letters of protest and concern to be sent the Pakistani government. This international campaign helped force the authorities to allow Baba Jan and his comrades visits and some medical treatment – which they had been previously denied.

Then, last month, there was word that they were finally about to be granted bail – nine months after they were arrested!

On July 19, the Joint Investigation Team (JIT), consisting of police and intelligence officials, came to Jutial Jail, Gilgit, where Baba Jan was being held, in order to take him into their custody.

Fearing that the team had not actually obtained judicial remand from the Anti-Terrorist Court, which would authorise them to take custody of Baba Jan, and further, fearing that the intention would be torture – either as a last-ditch attempt to extract a confession from Baba Jan or as a vindictive expression of their frustration at not being able to break him so far – the ordinary prisoners rose up in solidarity with Baba Jan and resisted the attempts of the team to shift Baba Jan out of the prison.

The JIT was turned away on July 19 but they returned the following night of July 20 and Baba Jan and one of his comrades Iftikhar Hussain were removed from the Gilgit jail by JIT personnel and taken to an unknown location.

Baba Jan’s lawyers and comrades did all they could to resist any move to hand over custody of Baba Jan to the police or the JIT and demanded that Baba Jan be questioned by the JIT in Jutial Jail. His supporters, especially his family, are said to be extremely worried that giving physical custody of Baba Jan to the crime police or the JIT will inevitably lead to further torture. Given the two previous instances, in October 2011 and April/May 2012, and the fact that the Anti-Terrorism Act admits confessions of the accused as evidence and that torture is an accepted means of “investigation” in our law enforcement paradigm, this is a well-founded fear.

The JIT is composed of police and intelligence agents representating the same establishments that previously abducted and tortured Baba Jan and his comrades in violation of judicial remand.

LPP and PYF comrades in Gilgit are unanimous in their assessment that now that the ruling clique of the region know that their attempts to manipulate the judicial system to pressurise the Hunza Five have almost failed. The authorities are extremely fearful about what will happen when the Hunza Five are at liberty and free to talk of their experiences and expose the reality of the collaborationist, anti-people elite to the people of Gilgit-Baltistan.

On July 23 more than 800 locals demonstrated in Hunza valley breaking through the fear imposed by the authorities after they fired on protests last August. This was the first mass protest in the valley for months. The elders of the area gave three days warning to the government to release Baba Jan in three days or face a march to their offices. The younger brother of Bab Jan said they had expected only 50 to 100 to join the march and were awed by the numbers that turned out.

Please act urgently to show your solidarity to these brave political prisoners of the global climate change crisis.

Please send an urgent letter of protest to: