Baba Jan and his comrades remain in prison for the crime of supporting the victims of devastating floods. They have been tortured and their lives are in danger. Supporters are calling for a week of international solidarity with these socialist activists, June 20-27.

Climate and Capitalism recently published an Urgent appeal for Baba Jan, prisoner of climate change. This article, from Europe Solidaire Sans Frontières and Asia Left Observer, provides more information about the case, and explains why international action is needed to save him and his comrades.

CALL FOR AN INTERNATIONAL WEEK OF ACTION, 20-27 JUNE 2012, FOR THE RELEASE OF BABA JAN AND HIS COMRADES

by Pierre Rousset and Danielle Sabai

It is urgent to relaunch the campaign of solidarity with the “Hunza 5” and all victims of state terrorism in Pakistan. 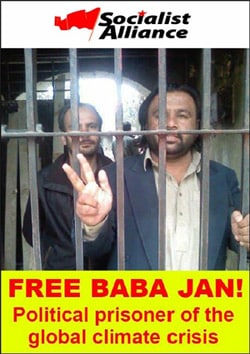 For months now, a solidarity campaign has been underway in Pakistan itself and internationally to obtain the release of Baba Jan and his four comrades: Iftikhar Hussain, Amir Ali, Ameer Khan and Rashid Minhas. They were imprisoned in Gilgit, northern Himalayan country. Twice severely beaten and tortured they were transferred to a prison with hardened criminals in late April where it was feared that their lives were in danger. The purpose of this transfer could indeed be that they were assassinated by other prisoners.

It is important not to take such a situation lightly. Not only are the cadres of popular organizations (peasants, trade unions …) slaughtered every year in the country, but prominent figures have been killed by security forces, like the late Governor Punjab Salman Taseer, or threatened with death: as is the case today for Asma Jahangir Former president of the Bar Association of the Supreme Court and the Human Rights Commission of Pakistan (an NGO), she worked for the United Nations as Special Rapporteur on freedom of religions and beliefs.

Remember also that Prime Minister Benazir Bhutto was shot dead in broad daylight and that a commission of UN investigation concluded that the murder could have been “avoided” if the authorities had provided an “effective protection”… Faced with the threat to the “Hunza 5,” the solidarity campaign was relaunched in a hurry, has grown and achieved early success: Twelve days after being wounded, Baba Jan and his comrades were finally visited by a doctor, organizations defending human rights began to mobilize and the Pakistani press began to take up their situation.

While their “crime” is to have supported a population which was first the victim of devastating floods in the Hunza Valley and then of police violence — with two dead during a demonstration — Baba Jan and his comrades were brought before an anti-terrorism court. They appealed against the decision, but the hearing is constantly being postponed on various pretexts (it is now scheduled for June 13). It is feared that the authority wants to obtain a conviction before their appeal can be heard.

The solidarity campaign must be intensified with urgency. In particular a week of international action is being called from 20 to 27 June.

The solidarity campaign: what has already been done

Actions taken to date have helped to break the isolation in which the “Hunza 5” were kept and they may have saved Baba Jan’s life. They should also serve as a fulcrum to expand the solidarity campaign. What needs emphasis here is that the initiatives involve a fairly wide range of personalities and movements.

Support from personalities. – On May 7, an “Open Letter” was published in defence of Baba Jan and his friends, originally signed by thirteen writers and academics in Britain and the USA, including Tariq Ali, Noam Chomsky, Vijay Prashad.

Support from organizations defending human rights. On May 7, the Commission of Human Rights (HRCP) launched an “urgent appeal” in defense of the “Hunza 5”. On May 10, it was the turn of the Asian Human Rights Commission (AHRC) to do the same 26 September 2011 already, the Philippines, ALTHAR – Defenders of the Alliance Three Peoples for Human Rights (Tri-People Alliance of Advocates for Human Rights) – sent a letter to Pakistani President via the embassy in Manila.

Support from radical environmentalists networks. These calls have been particularly sparked by the fact that Baba Jan and his comrades continued to stand up for the victims of a climate-ecological disaster. They were launched by Climate and Capitalism and Natural Choices. The Campaign against Climate Change Trade Union Group of Great Britain (Campaign against Climate Change Trade Union Group Britain) also joined in solidarity.

Support by social movements in Asia. On May 10, the New Trade Union Initiative of India has sent a letter of solidarity via the National Federation of Trade Unions of Pakistan – a gesture of solidarity which is particularly valuable when the respective governments keep these two countries in a state of latent war against each other. On May 24 in Indonesia, a delegation of the Joint Secretariat of Labour for Greater Jakarta which includes many unions, student movements, etc., took a letter of protest to the Pakistani Ambassador.

Parliamentary support. Initiatives were announced in the European Parliament. In Australia, David Shoebridge, MP, wrote to the High Commissioner and Consul General for Pakistan, calling for the release of Baba Jan and his fellow prisoners.

Socio-political support. Baba Jan is a member of the Federal Committee of the Labour Party Pakistan (LPP) and his fellow activists are members of the LPP or of the Progressive Youth Front, (PYF). They received the support of their sister organizations. On September 22, 2011 a statement of solidarity was signed by thirty organizations (political, union, etc.) and other initiatives have been taken since. Among the countries involved are Germany, Australia, Bangladesh, Croatia, the United States, France, Britain, Malaysia, India, Indonesia, Japan, New Zealand, the Netherlands, the Philippines, Switzerland ….

Many actions within Pakistan. At the initiative of the LPP and with the support of other organizations, many actions were taken in Pakistan, including demonstrations in various cities. On June 5, Farooq Tariq raised the case of Baba Jan and his comrades during a group meeting with Navi Pillay, High Commissioner of Human Rights to the United Nations. Rallies were held outside the Press Club in Lahore, to encourage the media to inform the public of the situation of the “Hunza 5” – three days of hunger strikes are planned by the Committee for the Liberation Baba Jan (FBJC) on 15, 16 and 17 June before the press club in Karachi.

This list of solidarity actions conducted to date is probably incomplete and will be updated later.

Solidarity Campaign: The Next Step

A new impetus has been given to the solidarity campaign.

Call for International Week of June 20-27 for the release of Baba Jan and all political prisoners in Pakistan. It has called for initiatives to be pursued with the Pakistani diplomatic missions, including denouncing the use by the establishment of anti-terorrist courts to punish human rights activists, trade unionists and peasant cadres and progressive people generally.

The important thing is that actions (delegations, rallies and “pickets” …) is conducted in as many countries as possible, to pressurize the Pakistani government through the increasing internationalization of protests and to alert the media.

The International Week of action will also kick start a week of national action that will follow immediately afterwards.

A week of action in Pakistan from June 27 to July 4. Besides the three-day hunger strike in Karachi, a national week of action is scheduled for late June-early July. It will be concluded on July 4 with a national gathering in Islamabad, the capital.

The LPP is considering taking legal action against the articles of the Anti-Terrorism Act that contradict the provisions contained in the Constitution of Pakistan in protecting human rights.

We must save the “Hunza 5” and secure their release. For them and also because they are a textbook case. They are indeed far from being the only ones involved. The use of torture by “security” forces and the frequent use of anti-terrorist courts must be challenged. The sentences are often quite arbitrary and terribly heavy. The criminalization of progressive social movements has reached extremely serious levels. From Faisalabad to Karachi via Lahore, trade unionists are in the line of fire, as well as small farmers and fishermen of Okara, in Karachi and also Dehra Sehgal.

Defending human rights defenders. Though it was asked, Amnesty International would not itself take charge of the defense of the ” Hunza 5,” while welcoming the fact that Human Rights Commission of Pakistan did. We understand that AI cannot deal directly with all cases of repression worldwide, and has to rely on other organizations. But there are many calls for the defense of human rights defenders is more systematically carried out – because by attaching them to the réprimé.es, they endanger themselves and become the target of repression. This is exactly what happened to Baba Jan and his comrades are in prison for having made known at the federal level what was happening in the Hunza Valley.

Fight against torture and state terrorism. Fundamentalist sects are responsible for many crimes in Pakistan, but so are the state apparatus, the military secret service, police, paramilitaries: we are also dealing with them. This fractured state is one of the most violent in the world; its components benefit from a level of criminal impunity rarely seen. Soldiarity concerns very directly the associations that are mobilizing against torture and state impunity.

Put an end to the criminalization of popular struggles. The policy of criminalizing unions and popular movements is very sensitive internationally. It has reached a climax in Pakistan. Defending progressive Pakistan activitsts is the responsibility of the global union movement, social forums and their components. The links are active with networks operating in South Asia, but we must now go further.

The right to the existence of a militant left. The Pakistani militant left does not have the same historical weight as in India or Bangladesh. But it exists – witness for example the LPP or the Workers’ Party (Workers Party) – and it has given birth to unitary structures. Their activists take very big risks by engaging in social resistance, defending women’s rights, opposing both fundamentalists and the army. The militant left is under attack from various directions: the security forces, militias of the bosses and landlords, armed fundamentalist groups, parties like the MQM mafia in Karachi … They need our help now.

Long term solidarity. The next step in the campaign for the release of “Hunza 5” should be an opportunity to further disseminate information about the situation of Pakistan and to build long term solidarity. Repression strikes across the country. Beyond Baba Jan and his comrades, it is affects all victims of arbitrary government and sectarian violence and fundamentalism. Workers, peasants, women, journalists, students, political activists. All women and all who stand against the powers that be are threatened.

Financial support. The defense of victims of state terrorism need significant resources: legal action, information work, mobilizations, travel, aid to families who have lost income with the imprisonment of unionists or the murder of a villagers … we should therefore continue the solidarity campaign launched in 2011 with financial commitment. Repression against popular resistance has hardened. It is clear that the ruling parties in many provinces, large wealthy families and the security apparatus want to break the back of progressive movements. A showdown is coming. It’s time to affirm our solidarity.

You can send donations via Europe Solidaire Sans Frontières:

Cheques: Euro cheques only and payable in France to the order of ESSF to be sent to: ESSF 2, rue Richard Lenoir 93100 Montreuil France

In France, these donations are tax deductible. We need your address to send you a tax receipt (usually indicated on the cheques).

You can stay informed through the ESSF website of developments on the ground and solidarity initiatives.