The second largest private corporation in the U.S., owned by two of the ten richest people in the country, is spending millions to block action on climate change 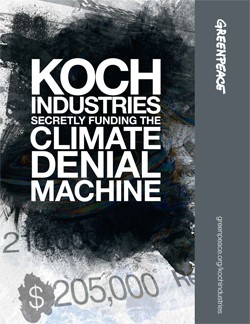 The following are excerpts from the Executive Summary of Koch Industries: Secretly Funding the Climate Denial Machine, published in March 2010 by Greenpeace.

Most Americans have never heard of Koch Industries, one of the largest private corporations in the country, because it has no Koch-branded consumer products, sells no shares on the stock market and has few of the disclosure requirements of a public company.

Although Koch intentionally stays out of the public eye, it is now playing a quiet but dominant role in a high-profile national policy debate on global warming. Koch Industries has become a financial kingpin of climate science denial and clean energy opposition. This private, out-of-sight corporation is now a partner to ExxonMobil, the American Petroleum Institute and other donors that support organizations and front-groups opposing progressive clean energy and climate policy.

In fact, Koch has out-spent ExxonMobil in funding these groups in recent years. From 2005 to 2008, ExxonMobil spent $8.9 million while the Koch Industries controlled foundations contributed $24.9 million in funding to organizations of the ‘climate denial machine’. …

This report focuses on activities by Koch Industries and its affiliates, as well as the family-and company-controlled foundations which fund organizations that spread inaccurate and misleading information about climate science and clean energy policies. Included is research on the company and the Koch brothers, two of the top ten richest people in the United States.

The Koch brothers own the corporation and control its political spending. Also included are newly compiled funding connections from Koch foundations to a vast array of conservative and libertarian organizations and front groups. The report documents the Koch-funded funded groups’ actions and the Koch legacy of climate denial and obstruction of environmental policy. …

Kansas-based Koch Industries is a conglomerate dominated by petroleum and chemical interests with approximately $100 billion in annual sales, operations in nearly 60 countries and 70,000 employees. Most of Koch’s operations are invisible to the public, with the exception of a handful of retail brands such as Brawny paper towels and Dixie cups, produced by its subsidiary Georgia-Pacific Corporation. Koch Industries has been ranked as the first- or second-largest privately-held company in the United States in recent years, currently ranked second behind Cargill corporation.

Contributions through Koch’s political action committee (PAC) are a matter of public record. Since the beginning of the 2006 election cycle, Koch’s PAC spent more on contributions to federal candidates than any other oil-and-gas sector PAC. For that period, Koch Industries and its executives spent $2.51 million compared to next three biggest contributors: Exxon ($1.71 million), Valero ($1.68 million), and Chevron ($1.22 million). Koch executives and their families wield political influence in other ways too, including direct federal lobbying and campaign contributions.

The combination of foundation-funded front-groups, big lobbying budgets, PAC donations, and direct campaign contributions makes Koch Industries and the Koch brothers among the most formidable obstacles to advancing clean energy and climate policy in the US.