Dealing in Doubt: how fossil fuel interests use the tobacco industry’s playbook to manufacture disinformation designed to confuse the public and stifle action to address climate change.

Dealing in Doubt, published this month by Greenpeace, is a concise and powerful history of the climate denial machine, the fossil fuel funded operation that uses methods created by the tobacco industry to manufacture disinformation designed to confuse the public and stifle action.

Below, the Introduction to Dealing in Doubt. 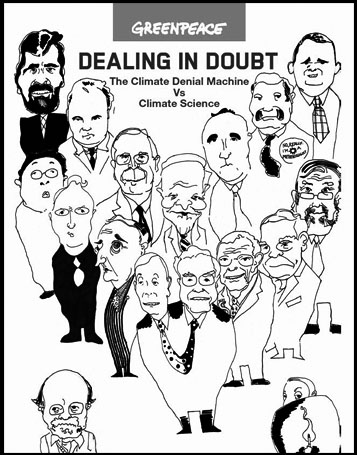 This report describes organized attacks on climate science, scientists and scientific institutions like the UN Intergovernmental Panel on Climate Change (the IPCC), that have gone on for more than 20 years. It sets out some of the key moments in this campaign of climate denial started by the fossil fuel industry, and traces them to their sources.

The tobacco industry’s misinformation and PR campaign in the US against regulation reached a peak just as laws controlling tobacco were about to be introduced. Similarly, the campaign against climate change science – and scientists – has intensified as global policy on climate change has become more likely. This time though there is a difference. The corporate PR campaign has gone viral, spawning a denial movement that is distributed, decentralised and largely immune to reasoned response.

This report updates our March 2010 report, ahead of the forthcoming 2013 release of the IPCC’s Fifth Assessment report.

The 2010 report was published just after the hysteria that greeted the release of climate scientists’ personal email hacked or stolen from the University of East Anglia on the eve of the Copenhagen Climate Summit in late 2009. This scandal showed the depth and sophistication of the climate denial movement and the willingness of the media to amplify their message, despite its lack of evidence or scientific support – and to be distracted from the urgency of the issue by unfounded attacks on leading research scientists.

Since 2009, there have been nine separate investigations into this so-called “scandal,” each of which have exonerated the scientists at the centre of the accusations. Yet that hasn’t stopped the continued hysteria around the scandals. There have been two more attempts at a “climategate” type scandal, releasing more emails, with very little effect. Unfortunately, traditional media outlets failed to properly correct the misinformation they were so culpable in helping to spread.

With this new edition of Dealing In Doubt we:

The majority of the front groups or free market think tanks running campaigns against climate science continue to receive funding from big oil and energy interests.

Since our first report, the massive campaign against climate science – and action on climate, funded by oil barons the Koch Brothers has come to light. And while fossil fuel companies like ExxonMobil, whose very products are causing global warming, continue to fund think tanks driving the campaigns, much of the foundation funding has now been driven underground, masked by a funding front-group called the Donors Trust – and its associate Donors Capital Fund, two “donor-advised” funds created to hide the real givers and thus shield them from negative exposure of their support for these campaigns.

Funding to the organizations that comprise the denial machine has risen during the Obama presidency, just as the urgency of climate solutions and promise of policy advances also rose.

“The side that has been issuing these attacks are extremely well-funded, well-organized. They have had an attack infrastructure of this sort for decades, developed it during the tobacco wars, they honed it further … in further efforts to attack science that industry or other sceptical interests find inconvenient. So they have a very well honed, well-funded organized machine that they are bringing to bear in their attack now against climate science.

“It’s literally like a marine in battle against a cub scout when it comes to the scientists defending themselves… We’re not PR experts like they are, we’re not lawyers and lobbyists like they are. We’re scientists, trained to do science.”

Meanwhile the consensus – and evidence – continues to grow

None of the climate denial machine’s counter attack has changed the harsh reality, the scientific consensus, that climate change is underway and it is caused by humanity’s pollution and other insults to the planet..

If there wasn’t already enough proof in the years of replicated scientific evidence, a May 2013peer reviewed study examined more than 11,000 climate change papers, and of the 4,000 papers that discussed whether climate change was caused by humans, 97 percent agreed. On the other hand, the percentage of papers challenging this consensus didn’t move – it had flatlined. This corroborated a similar finding in 2010 from the Proceedings of the National Academy of Sciences (PNAS).

The IPCC scientific assessment is a rigorous and robust process, one of the biggest organized scientific endeavours in the world, involving thousands of scientists in hundreds of research institutes around the world, who assess and compile the findings of thousands of published and peer reviewed papers across a wide range of topics, from the measurement of shrinking ice caps to oceans, clouds, temperature records and observed impacts. It is also a human endeavour and therefore not perfect.

The very purpose of the IPCC itself, and its periodic assessments and reports, is to inform governments participating in the UNFCCC process of the latest science in order to evaluate policy measures. Science is indeed the engine that drives the policy train. Certainty adds urgency and should spur action. The coal, oil and gas industries have always recognized this and have therefore strived for uncertainty to slow policy advances.

One of the most fascinating aspects of the IPCC is that the work is done entirely voluntarily. For many of the scientists involved, it’s the equivalent of having a second job, where you spend as much, if not more time on it as your primary job, unpaid.

Greenpeace has, and continues to have, confidence in the IPCC. There is no more reliable guide to – and summary of – the world’s climate science than the IPCC reports. If anything, due to the long lead-in time for the IPCC reports, they err on the side of conservatism. In late 2012, studies that compared the IPCC’s predictions over 22 years of weather data showed that the organisation has consistently underplayed the intensity of global warming in its reports. The denier campaigns against the IPCC consistently accuse it of overplaying the science, but, if anything, it has underplayed it.