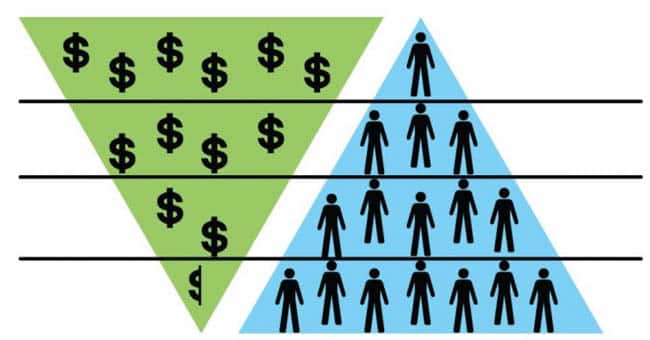 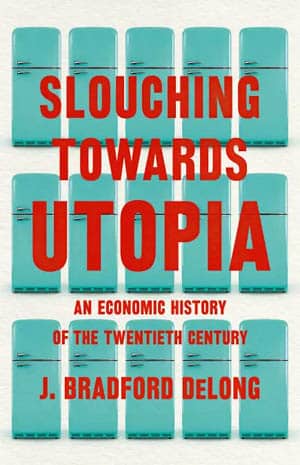 Bradford DeLong is one of the world’s most prominent Keynesian economists and  economic historian who is a professor of economics at the University of California, Berkeley. DeLong served as Deputy Assistant Secretary of the U.S. Department of the Treasury in the Clinton Administration under Lawrence Summers.  He is a architype liberal Democrat in US politics and a classical Keynesian in economics.

He has published a new book, entitled Slouching towards Utopia: an economic history of the 20th century.  It’s an ambitious work aiming to analyze and explain the development of the capitalist economy in what he considers its most successful period: the 20th century.

In particular, DeLong claims that capitalism as a progressive force for developing the needs of humanity only took off from 1870 up to the Great Recession of 2008-9, which completed what he calls “long twentieth century”.  What were the reasons that enabled capitalism to deliver faster economic growth and a quantum jump in living standards from 1870 onwards?  DeLong says they were “the triple emergence of globalization, the industrial research lab, and the modern corporation.”  These factors “ushered in changes that began to pull the world out of the dire poverty that had been humanity’s lot for the previous ten thousand years, since the discovery of agriculture.”  So growth was down to the expansion of capital and market economies from northern hemisphere to the rest of the world; the application of new technology and scientific discoveries; and through modern companies that developed them for the market.

In effect, DeLong claims that capitalism worked during the 20th century to improve the lot of humanity; despite two horrific world wars; incessant regional conflicts; and intensive exploitation of multi-national companies of the globe.  But this “long twentieth century” ended in 2010, with the advanced capitalist economies “unable to resume economic growth at anything near the average pace that had been the rule since 1870.”

DeLong claims for capitalism in his long 20th century that “things were marvelous and terrible, but by the standards of all of the rest of human history, much more marvelous than terrible.”  It was the century “that saw us end our near-universal dire material poverty.” Capitalism was successful during this long century first because of the power of the market, say compared to the failure of ‘planning’ as in the Soviet Union.  For that, DeLong says, we can thank “the genius, Dr. Jekyll–like, Austro-English-Chicagoan moral philosopher Friedrich August von Hayek” who observed that “the market economy crowdsources—incentivizes and coordinates at the grassroots—solutions to the problems it sets.”  Once capitalism had the right institutions for organization and research and the technologies; and was fully globalized, this “unlocked the gate that had previously kept humanity in dire poverty. The problem of making humanity rich could now be posed to the market economy, because it now had a solution.”

Thus capitalism appeared to be racing towards the utopia that many craved for: no poverty and freedom from toil – a utopia that Keynes had claimed was probable (by now in 2022) when he lectured his Cambridge University students in 1931 against communism and for a science-based utopia of a leisure society.

DeLong’s thesis is based on his choice of 1870 as some watershed for development under capitalism.  And there is some evidence for this, as his figures show.  But it still seems arbitrary to me.  From the early period of agricultural capitalism in the mid-17th century, led by a republican England and Holland, economic growth rose faster than in the medieval period.  Of course, what is true is that population growth also took off and at least up to the early 19th century kept pace or even outstripped economic growth so that per capita income did not rise appreciably – apparently justifying the Malthusian analysis (and Malthus’ reactionary prescription of accepting high mortality rates in a dismal world).

But Malthus was wrong.  The capitalist mode of production, particularly in its industrial phase from the early 19th century accelerated the productivity of labor and also overall national output.  Indeed, as DeLong points out, Karl Marx and Friedrich Engels had in 1848 already seen that the capitalist mode of production was a Promethean force that would develop the ‘productive forces’ dramatically.  Delong quotes M and E in 1848 on capitalism: “during its rule of scarce one hundred years, … created more massive and more colossal productive forces than have all preceding generations together. Subjection of Nature’s forces to man, machinery, application of chemistry to industry and agriculture, steam-navigation, railways, electric telegraphs, clearing of whole continents for cultivation, canalization of rivers, whole populations conjured out of the ground—what earlier century had even a presentiment that such productive forces slumbered in the lap of social labor?”

But DeLong adds a caveat to this apparent success: “never forget that the riches were vastly more unequally distributed around the globe in 2010 than they were in 1870.” And that caveat brings us to a very important contradiction in DeLong’s analysis.  Yes, on average the people of the past were many times ‘poorer’ than we are today.  In 1820 the global GDP per capita is estimated to have been around 1,102 international-$ per year and this is already after some world regions had achieved some economic growth. For all the hundreds, and really thousands, of years before 1820, the average GDP per capita was even lower. 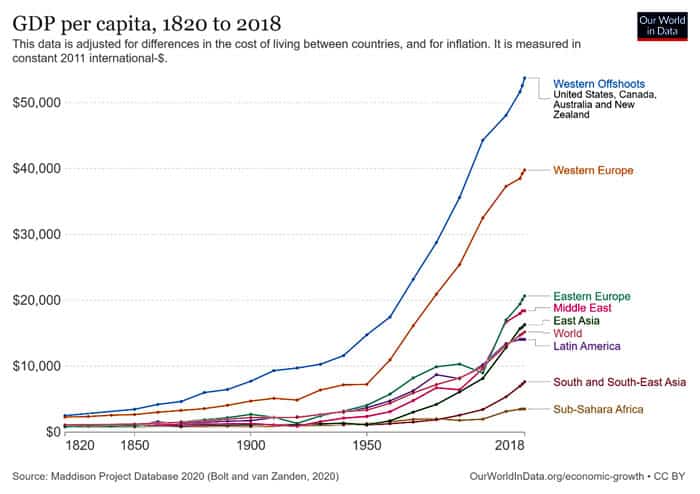 But Marx and Engels also had a caveat: namely the dark side of capitalism: its annihilation of the commonweal; the driving of the working population into exploitation by capital; the rabid expansion of the subjugation politically and economically of billions in the less developed economies, increasingly breeding ever more violent wars of a global nature; and the fast-growing destruction of nature and the planet.  DeLong glosses past these contradictions.

DeLong claims that “today, less than 9 percent of humanity lives at or below the roughly $2-a day living standard we think of as “extreme poverty,” down from approximately 70 percent in 1870. And even among that 9 percent, many have access to public health and mobile phone communication technologies of vast worth and power, he says.  That DeLong should accept without question the poverty level set by the World Bank ($2 a day!) or not show that but for the expansion of output per head in the Soviet Union in the first part of the ‘long century’ or for the unprecedented growth of the population colossus of China in the latter part of the century, poverty (even on World Bank measures) would not have declined by anything like to 9%.  Indeed, for many regions of the world, the gap between them and the ‘luckier’ (DeLong) nations of the Global North has not narrowed at all. And then there is inequality within nations – which I have well recorded from many sources in many previous posts.

DeLong says: “by 2010, the typical human family no longer faced as its most urgent and important problem the task of acquiring enough food, shelter, and clothing for the next year—or the next week.”  Really? Which ‘typical’ family is that? – maybe in Delong’s country, the US – although even there that may be questioned.  But how can that be the case for the four billion people who remain at or below what anybody would consider a more realistic poverty level (say, $10 a day).

DeLong’s book is called ‘slouching towards utopia’.  Apparently, the all-powerful capitalism of the 20th century has now slowed down to a crawl and utopia seems a more distant, ever-disappearing, prospect in the 21st century.  DeLong explains why: you see the world economy is still mediated by the market economy.  While the division of labor in this market economy has been very successful, “the problem is that recognizes no rights of humans other than the rights that come with the property their governments say they possess. And those property rights are worth something only if they help produce things that the rich want to buy. That cannot be just.” So capitalism only recognizes property rights and not the basic rights of humanity.

Of course, this Marxist view of the contradiction in capitalism is not that of DeLong.  For DeLong, the problem of capitalism is that it drives productivity only for profit and property rights and not for humanity as a whole.  Yes, indeed.  But DeLong offers no alternative to this for the 21st century, except that the world will need a new ideology, quoting his hero Keynes: “We lack more than usual a coherent scheme of progress, a tangible ideal. All the political parties alike have their origins in past ideas and not in new ideas—and none more conspicuously so than the Marxists.”

In looking for new ideas however, DeLong falls back on old ones: the classic Keynesian prescription for the vagaries of the market economy: “governments must manage, and manage competently”.  But even that has not ensured progress towards utopia after the Great Recession.  Governments have managed “with a heavy touch… and the political institutions of the global north did not even begin to grapple with the problem of global warming. The underlying engine of productivity growth had begun to stall. And the great and good of the global north were about to fail to prioritize a rapid restoration of full employment, and to fail to understand and manage the discontents that would bring neofascist and fascist-adjacent politicians to prominence worldwide in the 2010s.”

For DeLong, it is the failure of the ‘great and good’ to apply the right management policies to the market economy with a deft touch that is the reason for the race towards utopia turning into a slouch.  But he offers no explanation for the failure of governments to manage the market economy.  And he offers no explanation for why the productivity of labour, even in the advanced capitalist economies, has slowed down to a crawl (and well before the 2010 watershed).

As leftist historian Adam Tooze put it in his review of DeLong’s book: “The title itself is telling. Slouching towards utopia? If utopia were on the cards, would slouching really be our problem? The big worry right now is the fear that the 20th century has set us hurtling towards collective disaster….to avoid disaster, can we expect that DeLong’s 20th-century formula — labs, corporations, markets and wise government — will suffice?”