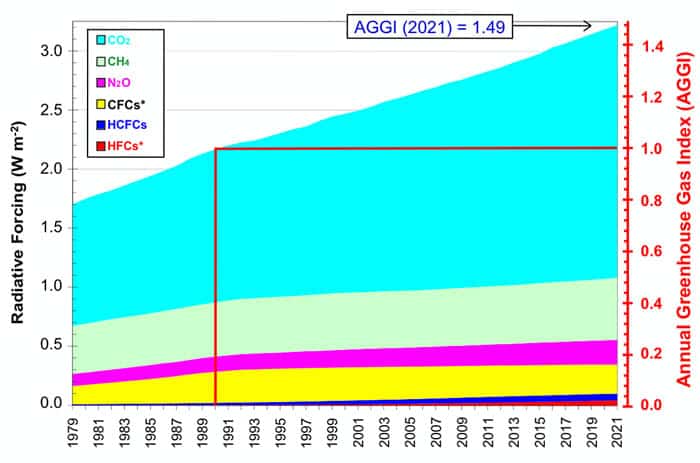 This graph depicts the relative contributions of the major greenhouse gas pollutants to global warming, in watts per square meter along the left axis. The NOAA Annual Greenhouse Gas Index (AGGI) is shown on the right axis. (NOAA Global Monitoring Laboratory)

Greenhouse gas pollution caused by human activities trapped 49% more heat in the atmosphere in 2021 than they did in 1990, according to scientists at the US National Oceanic and Atmospheric Administration.

NOAA’s Annual Greenhouse Gas Index (AGGI), tracks increases in the warming influence of human emissions of heat-trapping gases, including carbon dioxide, methane, nitrous oxide, chlorofluorocarbons, and 16 other chemicals. It is indexed to 1990, the baseline year for the Kyoto Protocol and the year the first IPCC Scientific Assessment of Climate Change was published.

“Our measurements show the primary gases responsible for climate change continue rising rapidly, even as the damage caused by climate change becomes more and more clear,” says Ariel Stein, the acting director of NOAA’s Global Monitoring Laboratory. “The scientific conclusion that humans are responsible for their increase is irrefutable.”

In 2021, the AGGI reached a value of 1.49, which means that human-emitted greenhouse gases trapped 49% more heat in the atmosphere than in 1990. Because it is based primarily on highly accurate measurements of greenhouse gases in air samples collected around the globe, the result contains little uncertainty. 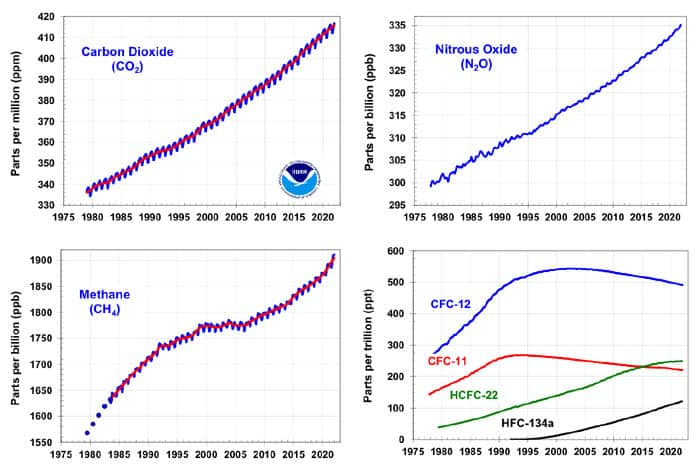 NOAA measurements show the global average concentration of CO2 in 2021 was 414.7 parts per million (ppm). The annual increase was 2.6 ppm during this year, about the average annual increase for the previous decade, and much higher than the increase measured during 2000-2009. CO2 levels have risen by 61 ppm since 1990, accounting for 80% of the increased heat tracked by the AGGI since that year.

CO2 stays in the atmosphere and oceans for thousands of years and it is by far the largest contributor to global warming. Eliminating CO2 pollution has to be front and center in any efforts to deal with climate change.

One of the most important scientific questions for climate scientists is what’s been driving the sharp, sustained increase of the second-most important greenhouse gas —  methane — since 2006.  Levels of atmospheric methane averaged 1,895.7 parts per billion during 2021. The increase recorded for 2021 was the fastest observed since the early 1980s, when a more rigorous measurement regime was initiated. Methane levels are currently around 162% greater than pre-industrial levels. The amount of methane emitted in 2021 was 15% greater than the 1984-2006 period.

The third-most important greenhouse gas is nitrous oxide, a long-lived climate forcing pollutant produced by fertilizer use in agriculture.

These three greenhouse gases, plus two banned ozone-depleting chemicals, account for about 96% of the excess heat trapped in the atmosphere due to human activity since 1750. The remaining 4% is from 16 other greenhouse gases also tracked by the AGGI. In aggregate, they trapped an amount of heat equivalent to 508 ppm of CO2 in 2021.

(Adapted from materials provided by NOAA.)