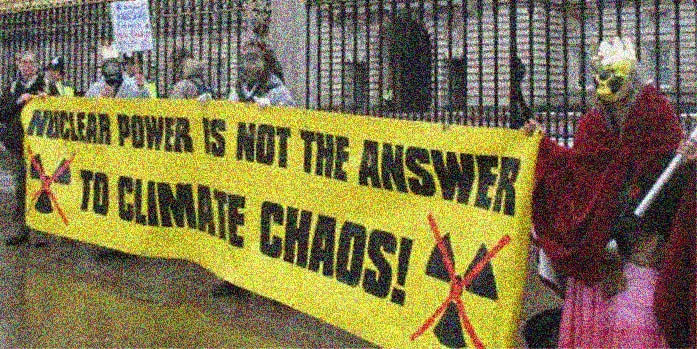 In a recent Guardian article, Jacobin magazine’s founding editor Bhaskar Sunkara declared that “If we want to fight the climate crisis, we must embrace nuclear power.” He praised nuclear as a clean and reliable and suggested that opponents of nuclear power are either gripped by “paranoia … rooted in cold war associations” or are relying on “outdated information.”

I disagree entirely. Here are 10 reasons why nuclear power is still no solution for climate change.

1. Nuclear is dangerous. Building many new nuclear power plants around the globe means a higher risk of unpredictable Fukushima-type accidents. We know more extreme weather events are locked in due to climate change, adding to the danger as time passes.

2. Nuclear wastes water. Nuclear power is an incredibly water-guzzling energy source compared with renewables like solar and wind. We know climate change-induced droughts and floods will make existing freshwater shortages a lot worse. So it’s a bad idea to waste so much water on more nuclear.

Uranium mining can also make nearby groundwater unusable forever. Half of the world’s uranium mines use a process called in-situ leaching. This involves fracking ore deposits then pumping down a cocktail of acids mixed with groundwater to dissolve the uranium for easier extraction. This contaminates aquifers with radioactive elements. There are no examples of successful groundwater restoration.

Science says we need to replace fossil fuels rapidly and completely but nuclear power does not allow for a fast transition. Solar and wind can be deployed much more quickly.

4. Nuclear is not green. The claim that nuclear is emissions-free relies on not telling the whole story. If you measure greenhouse gas emissions over the whole process — mining, refining, construction, decommissioning and waste storage — then nuclear is far worse for the climate than renewables.

A 2017 report by WISE International estimated nuclear lifecycle emissions at 88-146 grams of carbon dioxide per kilowatt hour. By contrast, estimates of lifecycle emissions for wind power sit at about 5-12 grams. Carbon emissions from uranium mining will also rise over time as the most easily recoverable ores are mined out.

5. Nuclear is not renewable. There’s not enough high grade uranium available for nuclear power to make a big dent in carbon emissions. If we trebled the number of nuclear plants worldwide recoverable uranium reserves would run out in a few decades.

If we replaced 70% of global energy use with nuclear power we’d run out of uranium in about 6 years. Nuclear reflects very short-term thinking. We need long-term sustainability.

Cost does matter, even if part of an emergency climate action plan like a Green New Deal. The higher cost of nuclear power reflects the higher amount of human labor time and natural resources it consumes.

If renewables were built instead of nuclear, the labor and resources saved could be better deployed in the other areas we need to bring about a future based on climate justice, such as housing, healthcare, sustainable farming or climate reparations.

7. Nuclear power means nuclear weapons. A big rollout of nuclear power would mean a big expansion of fissile materials that could be used for nuclear weapons. It would multiply the facilities such as enrichment and reprocessing plants that these weapons need. The spread of civil nuclear programs to more countries would make more states capable of quickly producing nuclear weapons.

In countries such as the US and the UK keeping civil nuclear power is a strategic military choice, not a savvy green policy. Consumers pay a higher energy price to maintain nuclear power infrastructure, which subsidizes nuclear weapons programs.

8. Nuclear waste is forever. The most hazardous nuclear waste decays so slowly that it won’t be safe for millions of years. Ramping up nuclear power will produce a lot more waste and there is no safe way to store it. It’s irresponsible to make this waste a problem for our descendants.

In some places nuclear waste is a very present problem. In the 1970s, the US army built a concrete cap to seal away 3.1 million cubic feet of radioactive waste on Runit Island, which is part of the Marshall Islands. Today, rising sea levels threaten to bring down the entire structure, releasing the radioactive waste into the lagoon. The US government has refused to help, saying it’s the Marshall Islanders’ problem now.

9. Uranium mining is unsafe. There is no safe way to mine uranium or other radioactive elements. Building more nuclear power will result in more leakage of radioactive materials into the environment and more workers exposed to unsafe conditions and preventable deaths.

10. Nuclear means dispossession. About 70% of the uranium used for nuclear power plants worldwide is mined from the lands of Indigenous minorities. For too long, Indigenous peoples’ lands and culture have been treated as nuclear industry sacrifice zones. We should not support any expansion.

Mirarr Traditional Owners, whose country lies in the north of Australia’s Northern Territory and encompasses the Ranger and Jabiluka uranium deposits, released a statement in March that “expressed their continued sadness” at the ongoing disaster at Fukushima. The uranium for the Fukushima reactor came from the Ranger mine on Mirarr lands, which they had always opposed.

In a 2011 open letter to the United Nations, Mirarr senior Traditional Owner Yvonne Margarula said that the Mirarr believe uranium mining globally “constitutes an unfair impact on Indigenous people now and into the future. We suffer the dangers and long term impacts of the front end of the nuclear fuel cycle so that others overseas may continue to enjoy lives without the awareness of the impacts this has on the lives of others.”

What’s the allure of nuclear?

It’s obvious why people connected with the failing nuclear industry will keep desperately pushing the “nuclear is a climate solution” argument. But there are also other people genuinely worried about climate change who might still stubbornly back nuclear power despite the arguments put above. There are several reasons for this.

For some, the mistake is to short-sightedly treat lowering greenhouse gas emissions in isolation from other concerns. This leads them to dismiss objections, which point out nuclear power’s close ties with environmental racism, militarism and the poisoning of Indigenous lands. Their mistake is to think of nuclear power, which is bound up in social systems of production, in a non-social way.

For others, nuclear power appeals because it aligns with fixed notions of progress and modernity, in which technological know-how is meant to lead to human mastery over nature. This ecomodernist outlook tends to treat nature as an enemy to conquer rather than a complex living system to defend and nurture. Their mistake is to think of nuclear power, which is an expression of capitalism’s alienation from natural needs, in a non-ecological way.

For others still support for nuclear power may best be explained as a studied lack of solidarity. When corporate executives, professors or journalists say we should build more nuclear power plants, they never volunteer to work in uranium mines, live near nuclear power plants, or host radioactive waste in their neighborhoods. Those burdens will always be borne by others.