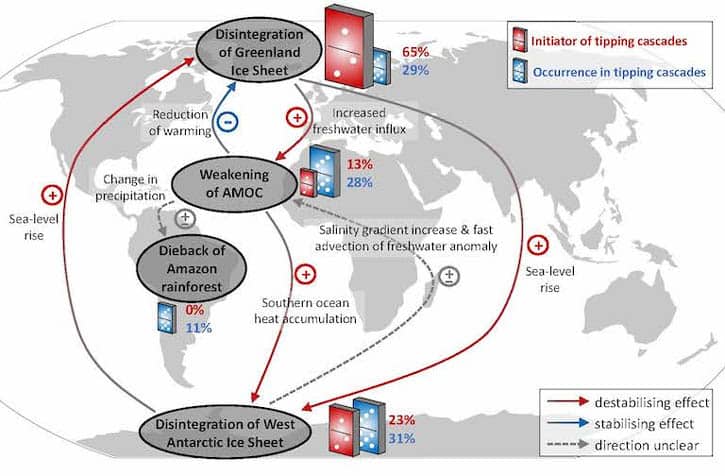 Interactions between climate tipping elements and their roles in tipping cascades.

When the first tile in a line of dominoes tips forward, it affects everything in front of it. One after another, lined-up dominoes knock into each other and topple. This is essentially what could happen to ice sheets, ocean currents and even the Amazon biome if critical tipping points are crossed, according to a new risk analysis. The destabilization of one element could impact the others, creating a domino effect of drastic changes that could move the Earth into an unfamiliar state — one potentially dangerous to the future of humanity and nature as we know it.

The study, published this month in Earth System Dynamics, examines the interactions between five subsystems that are known to have vital thresholds, or tipping points, that could trigger irreversible changes. They include the West Antarctic Ice Sheet, the Greenland Ice Sheet, the Atlantic Meridional Overturning Circulation (AMOC), the El Niño–Southern Oscillation (ENSO) and the Amazon Rainforest.

Scientists believe the AMOC could reach its critical threshold when warming temperatures weaken the current enough to substantially slow it, halt it, or redirect it, which could plunge parts of the northern hemisphere into a period of record cold, even as global warming continues elsewhere. Likewise, the Antarctic ice sheet may reach its irreversible threshold when warming temperatures trigger a state of constant ice loss, which could ultimately result in a 4-meter (13-foot) rise in global sea levels over the coming centuries. In fact, it’s suggested that the West Antarctic Ice Sheet may have already passed its critical threshold, and that ice loss is unstoppable now.

These individual tipping points are largely being driven by human-caused climate change, which is considered to be one of nine planetary boundaries — scientifically identified limits on change to vital Earth systems that currently regulate and sustain life. Overshooting those boundaries could lead to new natural paradigms catastrophic for humanity. Climate change has its own threshold of 350 parts per million (ppm) of CO2, which is the amount that scientists say the atmosphere can safely hold, but this threshold was already passed in 1988. In 2021, CO2 exceeded 417 ppm, which is 50% higher than pre-industrial levels.

To conduct this new study, the research team used a conceptual modeling process to analyze the interactions between these five Earth subsystems. What they found was that more than a third of these elements showed “tipping cascades” even before temperatures reached 2° Celsius (3.6° Fahrenheit) above pre-industrial levels, which is the upper limit of the 2015 Paris climate agreement. At present, almost no nation on Earth is on target to meet its Paris carbon reduction goals.

Significantly, the study also found that the interactions between the tipping elements could lower critical temperature thresholds, essentially allowing tipping cascades to occur earlier than anticipated. Additionally, the researchers found that the Greenland Ice Sheet would function as an initiator of tipping cascades, while the AMOC would act as a transmitter that would push further changes, including dieback of the Amazon. Most of these tipping elements have been projected to have a destabilizing effect on each other, with the exception of the weakening of the AMOC, which could actually make the North Atlantic region colder and help stabilize the Greenland Ice Sheet.

“We found that the overall interactions tend to make [things] worse, so to say, and tend to be destabilizing,” lead author Nico Wunderling, a scientist at the Potsdam Institute for Climate Impact Research in Germany, told Mongabay.

He said that the findings suggest that we already face significant risk, but that the study does not necessarily provide a forecast. “We have made a risk analysis,” Wunderling said. “This is not a prediction, but it’s more like, ‘OK, if we have this warming, then we might face an increasing risk of tipping cascades.’”

Tim Lenton, a professor of climate change and Earth system science at the University of Exeter, U.K., and co-author of a similar study on tipping points, says the new paper is a “useful addition to the assessment of climate tipping point interactions.”

“The important takeaway message from this study is that the cascading causal interactions between four different climate tipping elements lower the ‘safe’ temperature level at which the risk of triggering tipping points is minimized,” Lenton told Mongabay in an email. “In fact the study suggests that below 2°C of global warming (above pre-industrial) — i.e. in the Paris agreement target range — there could still be a significant risk of triggering cascading climate tipping points.”

However, Lenton says the study does not unpack the timescale in which these tipping cascades would occur, focusing more on their consequences. “In the case of ice sheet collapse this can take many centuries,” he said. “Hence the results should be viewed as ‘commitments’ to potentially irreversible changes and cascades that we may be making soon, but will leave as a grim legacy to future generations to feel their full impact.”

Juan Rocha, an ecologist at the Stockholm Resilience Centre, says the findings of the study affirm previous hypotheses about how “the tipping of one system can affect the likelihood of others in a self-amplifying way,” although he also notes its oversight of evaluating timescales.

“The Amazon is likely to tip way earlier than AMOC or Greenland,” Rocha told Mongabay. “Future work needs to take into account the diversity and uncertainty of the feedbacks at play for each tipping element to really understand how likely [it] is that one system can tip the other.”

Rocha says he’s pleased the authors undertook this study and hopes others continue to build on this research.

“I would like to extend an invitation to the authors and the scientific community to keep working on these important questions,” he said. “There is a lot of work to do, a lot that we do not know, and our models can only get us so far. Understanding how different systems of the Earth … are connected is fundamental to avoid the risk of domino effects, but also to empower people to act on time, identify leverage points and understand the extent of action or lack of it.”