An extraordinary year for extreme weather and climate events in the United States. 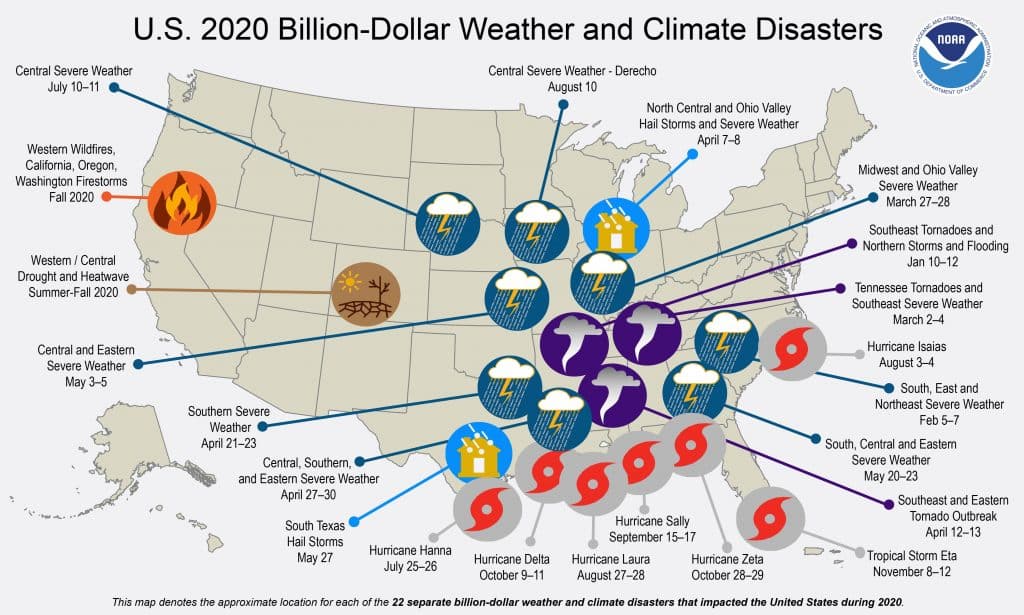 Scientists at the National Oceanic and Atmospheric Administration say that in 2020 the U.S. experienced a record-smashing 22 billion-dollar weather and climate disasters that killed at least 262 people and injured scores more:

Damages from these disasters exceeded $1 billion each and totaled approximately $95 billion for all 22 events.

The seven billion-dollar tropical cyclones were the most in one year since NOAA started keeping track of billion-dollar disasters in 1980. The extremely active 2020 Atlantic hurricane season produced an unprecedented 30 named storms, with 12 making landfall in the continental U.S. The combined cost of the seven tropical systems was approximately $40.1 billion, more than 42% of the total U.S. billion-dollar disaster price tag in 2020.

Since 1980, the U.S. has sustained 285 separate billion-dollar weather and climate disasters that have exceeded $1.875 trillion in total damages to date.

The average temperature across the contiguous U.S. in 2020 was 54.4 degrees F (2.4 degrees above the 20th century average), making 2020 the fifth warmest year on record. All five-warmest years in the U.S. have occurred since 2012, according to NOAA scientists from NOAA’s National Centers for Environmental Information.

Ten states across the Southwest, Southeast and East Coast had their second-warmest year on record. There were no areas of below-average annual temperatures observed across the Lower 48 states during 2020. In Alaska, despite temperatures running 1.5 degrees F above the long-term average, the state saw its coldest year since 2012.

Precipitation across the contiguous U.S. totaled 30.28 inches (0.34 of an inch above average), which placed 2020 in the middle third of the 126-year climate record.

Nevada and Utah ranked driest on record, with Arizona and Colorado ranking second driest. On the flip side, North Carolina recorded its second-wettest year, with Virginia seeing its third wettest.

According to the U.S. Drought Monitor, 2020 ended with extreme and exceptional drought conditions enveloping about 22% of the contiguous U.S. — the largest expanse since August 2012.