A small increase in long-term exposure to polluted air leads to a large increase in Covid-19 death rates. 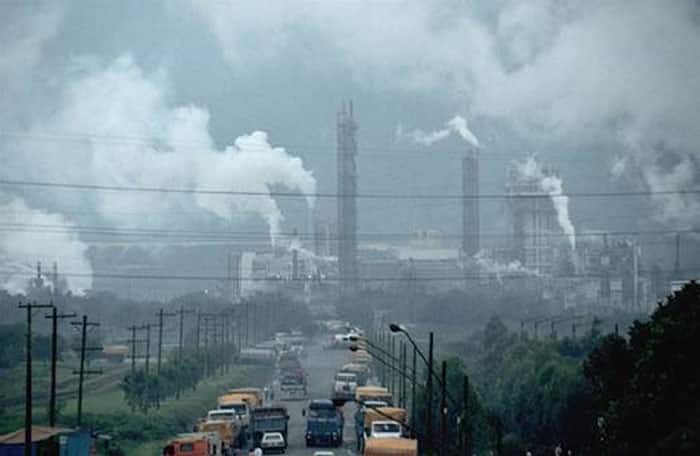 On December 30, 2019, an urgent email circulated on the internet, in which the Wuhan Municipal Health Committee noted the treatment of multiple patients with “pneumonia of unknown cause.” Since then, researchers have identified antibodies to SARS-CoV-2, the virus that causes COVID-19, in blood and spit samples in the United States, France and Italy, suggesting human exposure to the virus may have occurred well before that first cluster in Wuhan, China. Scientists have a long road ahead in pinpointing the exact conditions under which COVID-19 originated. But the job is underway.

The World Health Organization and a Lancet COVID-19 Commission are in the midst of attempting to trace COVID’s origin story to determine how public health officials might prevent pandemics of similar proportions in the future. In the meantime, epidemiologists agree that humans most likely got the virus from bats, through a transfer linked to the same changes in land use that contribute to the climate crisis.

Carlos Zambrana-Torrelio is the associate vice president for conservation at the EcoHealth Alliance. As he explained during a talk on biodiversity loss and COVID-19 in April, over 400 diseases have jumped from other animals to humans in the past 60 years, an estimated 65 percent of which have been linked to ecosystem loss through processes like deforestation and an increase in agricultural practices. “We are getting more encounters with animals and therefore we get more viruses coming from these animals to us,” Zambrana-Torrelio said. Other zoonotic viruses, including MERS, H1N1 and HIV, followed a similar course.

“Bat viruses spill into humans; they don’t climb into us,” the author of Spillover: Animal Infections and the Next Human Pandemic, David Quammen wrote in December for the New York Times. As the public grows familiar with COVID’s original hosts, people shouldn’t harbor animosity toward bats or other animals, he wrote, explaining how extractive processes like hunting bats for meat or collecting bat excrement for fertilizer is what tends to initiate the “spillage” of viruses. In his piece, Quammen emphasizes that the viral transfer did not occur because a bat simply “flew into Wuhan and bit a poor man on the toe.”

Neither should individual people tied into extractive livelihoods that sustain them necessarily be held to blame for the ecosystem changes they’re caught in. “Disease happens because of natural and unnatural selection,” University of Minnesota professor of veterinary population medicine Dominic Travis said during a panel in May. With each degree of latitude moving toward the equator, the diversity of microorganisms, flora and fauna increases, which means human encroachment on these ecosystems provides increased opportunities for viral transmission. Concerns about hunting and poaching are valid, Travis said, but cracking down on specific locations where the probability of disease transfer is heightened masks the larger driving forces of global capitalism. “Locally, you have markets based on food security,” Travis said. “But then we’ve got this scalability issue as well. We’ve got these global trade routes where these products are transferred.”

Such was the case with the 1998 Nipah virus outbreak in Malaysia, spurred in part by an increased demand for pork. As rainforests were burned and cleared to make way for new agricultural land, fruit bats that lived among the canopies were left without fruit to feed on, forcing them into orchards elsewhere. Somewhere in that process, on account of the sudden close proximity, pigs living around the orchards picked up Nipah, possibly by consuming fallen fruit that bats had nibbled on. Once it was known that livestock were getting sick, pig farmers prepared their animals even more rapidly for markets to minimize potential economic loss in case the animals got sick and died. Of the 265 people who contracted Nipah during the outbreak, 105 died as a result of the virus. Other Nipah virus outbreaks have since been detected in Singapore and the Philippines, as well as repeated outbreaks in Bangladesh and India, where the mean fatality rate is 75 percent.

With the COVID-19 vaccination rollout underway, the question of how to prevent future pandemics looms large. Some scholars focus on the benefits of international aid, such as USAID’s Biodiversity Conservation and Forestry Program. “At an annual cost of $9.6 billion, direct forest-protection payments to outcompete deforestation economically could achieve a 40 percent reduction in areas at highest risk for virus spillover,” 17 international scholars co-wrote in a July article in the journal Science. The scholars also point to strengthening wildlife enforcement networks and minimizing disease spillover by testing wildlife, humans and livestock for known pathogens in rural areas more frequently.

Other scholars have emphasized that mitigating the current pandemic and preventing future ones must entail a shift in political philosophy — refocusing policy to bring about degrowth, debt cancellation and the precarious conditions in which agricultural laborers work. Iowa State University professor of ecology and evolutionary biology, Rob Wallace, for instance, has written for Truthout that investing in healthy soil and clean water could minimize the rift between economy and ecology that leads pathogens to spring up in unexpected pastures. “On the world stage, we must end the unequal ecological exchange between the Global North and South,” Wallace wrote.

Whereas a virus like SARS-CoV-2 may have once “burned out” relatively quickly in a healthy forest ecosystem, Wallace suggested in Monthly Review, “Ecosystems in which such ‘wild’ viruses were in part controlled by the complexities of the tropical forest are being drastically streamlined by capital-led deforestation and, at the other end of the peri urban development, by deficits in public health and environmental sanitation.” When left to live in an environment undisturbed by humans, pathogens have fewer opportunities to encounter their ideal host species, Wallace explained, so they often die out on their own.

As of this writing, over 82 million people have active COVID cases across the globe, and over 1.7 million people have died from the disease, according to Johns Hopkins University’s COVID-19 dashboard. The results of public health research suggest the staggering COVID numbers — particularly the fatalities — could have been prevented by policies and regulations that prioritize the health of human ecosystems.

A Harvard analysis of data from 3,080 U.S. counties shows that a small increase in long-term exposure to polluted air leads to a large increase in COVID-19 death rates, such that if Manhattan had taken measures to lower its level of particulate matter by a single microgram per cubic meter over the past 20 years, 248 fewer people may have died from COVID-19 in that borough. Ongoing wildfires in the Western U.S., linked to rising average temperatures as a result of climate change, may also increase the risk of COVID. The Centers for Disease Control and Prevention (CDC) states that wildfire smoke can irritate lungs, cause inflammation, affect the immune system and “make you more prone to lung infections, including SARS-CoV-2.”

Meanwhile, on December 7, the Trump administration rejected Environmental Protection Agency (EPA) scientists’ recommendations to lower the soot standard, the Washington Post reported. According to EPA scientists, lowering the standard to between eight and 10 micrograms per cubic meter could save up to 34,600 lives each year — a disproportionate number of which would likely be people of color. White people breathe 17 percent less air pollution than what is caused by their own consumption, in comparison with Black and Latinx people, who consume 56 and 63 percent more, respectively, than what they themselves are responsible for emitting. The disparity is due, in part, to drastically different concentrations of air pollution at places of residence, but the causes behind the findings are a subject of ongoing analysis. “This flies in the face of good science and good public health. It is outrageous,” Dominique Browning, co-founder and the head of Moms Clean Air Force told The Washington Post.

Much remains to be researched regarding the impact of pollution and other environmental malaise on COVID outcomes. A Danish study now under peer review suggests exposure to the “forever chemical” PFAS may increase the likelihood of developing severe COVID-19 symptoms twofold. The CDC recently issued a statement that high PFAS levels in the blood may also lessen COVID-19 vaccine efficacy, noting however that “more research is needed.” Ostensibly, the dozens of Trump-era environmental rollbacks — including loosened restrictions on the transport and discharge of genetically modified organisms (GMOs) and the release of wastewater from coal-burning power plants — could be further worsening COVID’s wrath through dynamics upon which researchers have yet to design studies.

As is the case with the climate crisis, all countries are not created equal in their culpability in and failure to respond to the COVID crisis, nor now, in their access to the vaccine. As Georgetown Professor of Global Health Emily Mendenhall has written in The Lancet, “Recognising failures of wealthy countries is imperative as we think about where global knowledge and power sit within fields like global health.”