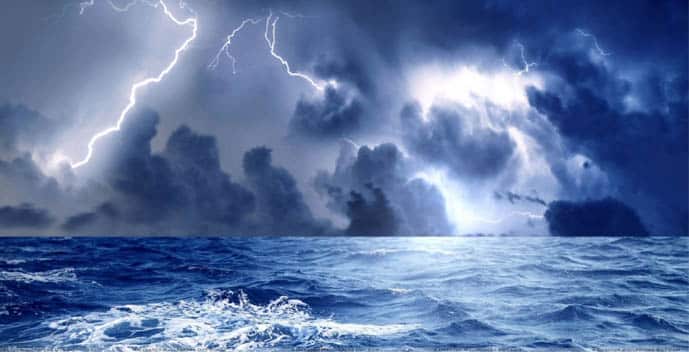 “Triple Crisis” has been published in three parts

Until the 1970s, the constant flow of energy that Earth receives from the sun was offset by heat reflected back into space, so the planet’s overall energy level did not change very much over time. The amount of incoming solar energy has not changed, but rising concentrations of greenhouse gases are trapping ever more of the reflected heat, preventing it from leaving the atmosphere. Climate scientists call this Earth’s Energy Imbalance.

The excess energy is not distributed evenly through the Earth System. Although global warming is usually expressed as increased air temperatures, the ocean is actually much better at storing heat than the atmosphere — one degree of ocean warming stores over 1000 times as much heat energy as one degree of atmosphere warming — so it isn’t surprising that the ocean has taken up most of the excess solar energy. Just seven percent warms the air and land and melts snow and ice — 93 percent is absorbed by the ocean.[2]

Scientists measure the ocean’s heat content in joules — the amount of energy required to produce one watt of power for one second. In a commentary on the latest data, Lijing Cheng of China’s Institute of Atmospheric Physics calculates that the increase in ocean heat content over the past 25 years required the addition of 228 sextillion joules of heat — that’s 228 followed by 21 zeroes.

That’s about five Hiroshima bombs a second — and the rate is accelerating.

By absorbing and storing immense amounts of heat, the ocean delays the impact of Earth’s Energy Imbalance on the global climate system. In oceanographer Grant Bigg’s words, the ocean “acts as a giant flywheel to the climate system, moderating change but prolonging it once change commences.”[5] The price paid for that storage and delay is record-setting ocean heat that is disrupting the world’s largest ecosystem in a multitude of ways.

Most climate change forecasts emphasize long-term global average changes. Those are important metrics, but they can be misleading when the average conceals serious short-term or regional changes and events. For example, although climate negotiations focus on future global average temperatures, regional heatwaves with atmospheric temperatures much higher than historical averages are already increasing in intensity, frequency and duration.[6]

The same is happening in the ocean.

The very idea of marine heatwaves is new: the term itself first appeared in 2011, in a government report on “a major temperature anomaly” in which “water temperatures off the south-western coast of Western Australia rose to unprecedented levels.”[7] As recently as 2015 only five articles in English-language scientific journals had marine heatwave in the title, but in 2019 there were 92 — an increase that reflects what the journal Nature recently said is “the appearance an entirely new subdiscipline: the study of marine heatwaves (MHWs), discrete periods of unusually warm temperatures in the ocean.”[8]

The sudden growth of scientific interest in marine heatwaves is no accident. It reflects a real shift in the ocean’s climate in the past two decades: a radical increase in the frequency, intensity and duration of periods of when water temperatures are much higher than normal. Such extreme events can have devastating impacts on ocean ecosystems: organisms that have evolved to live within a limited temperature range must adapt, flee or die when that range is exceeded.

Marine heatwaves are usually defined as five or more consecutive days in which sea surface temperatures are in the top ten percent of the 30-year average for the region. Using an even stricter definition — temperatures in the top one percent — the IPCC recently concluded that since 1982, marine heatwaves “have doubled in frequency and have become longer lasting, more intense and more extensive,” and “the observed trend towards more frequent, intense and extensive MHWs … cannot be explained by natural climate variability.”[9] Climate scientists at the University of Bern, Switzerland, report that “the occurrence probabilities of the duration, intensity, and cumulative intensity of most documented, large, and impactful MHWs have increased more than 20-fold as a result of anthropogenic climate change.”[10]

The 21st century has seen particularly devastating marine heatwaves in the Mediterranean (2003), Bay of Bengal (2010), western Australia (2011), northwest Atlantic (2012), northeast Pacific (2013–2016), Tasman Sea (2016), and New Zealand (2016). All had profound and lasting impacts on plant and animal life. Off the coasts of western Australia and Tasmania, for example, high temperatures killed massive kelp forests, home to innumerable fish species, and invasive warm water sea urchins then took over the seafloor, preventing kelp and other plants from regrowing.

The 2013–2016 northeast Pacific heatwave was largest, longest and deadliest MHW to date. It was nicknamed The Blob after the 1958 science fiction movie, and, like its space monster namesake, it grew rapidly and destroyed much of the life it enveloped. After forming in the Gulf of Alaska in the autumn of 2013, in less than a year it expanded south to Mexico, ultimately covering about 10 million square kilometers and penetrating up to 200 meters down. 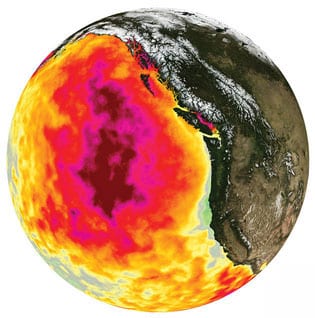 Food webs that have sustained life for millennia collapsed in unprecedented heat. Populations of phytoplankton, copepods, krill and other small heat-sensitive creatures plummeted, and animals that normally eat those creatures, including over 100 million cod and millions of seabirds, starved to death. So did thousands of sea lions when their prey disappeared. Hundreds of kilometers of kelp forests wilted and died. Heat killed 95% of Chinook salmon eggs in the Sacramento River. The largest toxic algae bloom ever seen released deadly neurotoxins, forcing the closure of clam and crab fisheries from Vancouver Island to California.

The Blob finally dissipated in 2016, but intense marine heatwaves continue to affect the northeast Pacific. The second and third largest marine heatwaves ever seen in that area occurred in 2020 and 2019, respectively. As I’m writing this, in October 2020, the latest iteration covers 6 million square kilometers, down from 9 million a month ago.

Until five years ago, no one imagined that a marine “temperature anomaly” might encompass an area as large as Canada and last over two years. Past research on ocean climate change has focused on the effects of long-term changes in average water temperatures but now, as eighteen leading specialists in the field write, “discrete extreme events are emerging as pivotal in shaping ecosystems, by driving sudden and dramatic shifts in ecological structure and functioning.” They warn that marine heatwaves “will probably intensify with anthropogenic climate change [and] are rapidly emerging as forceful agents of disturbance with the capacity to restructure entire ecosystems and disrupt the provision of ecological goods and services in coming decades.”[11]

A major study published in December 2019 projects that the size and frequency of marine heatwaves will increase so much that many parts of the ocean will reach “a near-permanent MHW state” by late in this century. The researchers project that even if greenhouse gas emissions start falling by mid-century, by 2100 about half of the global ocean will experience heatwaves 365 days a year. If emissions don’t decline, by 2100 there will be permanent heatwaves in 90% of the ocean, and over two-thirds of those will be Category IV, the most extreme level. (For comparison: the Blob, which disrupted ecosystems in 10 million square kilometers of the Pacific, killing millions of fish, birds and marine animals and displacing millions more, was only Category III.)

It may then be necessary to introduce new categories, “allowing for identification of increase in ‘extreme extremes,’ as Category V, Category VI, etc.” By 2080, if emissions remain high, the Earth System will be in a “time when the MHW climate has changed completely from the range that species have previously experienced, and represents a qualitatively different climate.”[12]

‘Misery on a global scale’

All by itself, ocean warming is a major threat to the stability of the world’s largest ecosystem — but ocean warming does not occur “all by itself.” The deadly trio of ocean warming, loss of oxygen and acidification are all consequences of disrupting the global carbon cycle. Burning massive amounts of long-buried carbon has changed the ocean’s chemistry, heated the water and driven out oxygen. Those processes take place simultaneously and reinforce each other, making the ocean increasingly inhospitable, even deadly, for living things from microbes to whales.

Worse, the deadly trio isn’t acting alone. Overfishing has wiped out many species, and it’s predicted that most wild fish populations will be 90% depleted by 2050. Pollutants, including tons of plastics that essentially last forever, are poisoning marine life from coastlines to the deepest trenches. Nitrogen fertilizer run-off has created a thousand or more dead zones in coastal waters and estuaries. Off-shore oil wells are leaking deadly hydrocarbons, and mining companies are preparing to dredge rare minerals from the deep sea floor, destroying some of the few remaining undamaged parts of Earth’s surface.

As environmental geologists Jan Zalasiewicz and Mark Williams write, “a wholesale refashioning of the marine ecosystem” is now underway. If business as usual continues, “pervasive changes in the physical, chemical and biological boundary conditions of the sea … [will] transform, irreversibly, and for the worse, the Earth and its oceans.”[13]

The effect of that transformation was summed up by Agence France-Presse, in its account of the IPCC’s 2019 report on the oceans: “The same oceans that nourished human evolution are poised to unleash misery on a global scale unless the carbon pollution destabilizing Earth’s marine environment is brought to heel.”[14]

[4] Intergovernmental Panel on Climate Change, Special Report on the Ocean and Cryosphere in a Changing Climate (IPCC, 2019), 62.

[9] Intergovernmental Panel on Climate Change, Special Report on the Ocean and Cryosphere in a Changing Climate (IPCC, 2019), 67, 607.