“Triple Crisis” has been published in three parts:

The ocean is losing its breath, with deadly effects on marine life and the biogeochemical cycles that shape the entire biosphere.

Since 1960, low-oxygen areas in the open ocean have expanded by 4.5 million square kilometers, an area the size of the European Union. Some regions have lost 40% of their oxygen, and the volume of water containing zero oxygen has more than quadrupled. The ocean is losing about a billion metric tons of oxygen every year. At present rates, the decline in life-giving ocean oxygen will triple by 2100. Add that to the rapidly growing number of coastal dead zones, and we have a life support emergency.

Overall, the ocean’s oxygen content has fallen just 2%, but the decline has occurred almost entirely in parts of the ocean where marine life is usually most abundant, so its impact is far greater than that percentage suggests.

Previous articles in this extended series on metabolic rifts have examined two ecological gluts created by capitalism’s inherent drive to expand at all costs: the nitrogen glut created by industrial agriculture’s dependence on synthetic chemical fertilizers, and the carbon dioxide glut created by capitalism’s dependence on fossil fuels. Both are disrupting biogeochemical cycles that have shaped the biosphere for hundreds of millions of years, causing unprecedented rifts in the Earth System’s metabolism.

The ocean oxygen crisis is driven by the nitrogen and carbon dioxide gluts, in different parts of the ocean.

In coastal areas and estuaries, millions of tons of synthetic nitrogen fertilizer carried by rivers are creating seasonal dead zones in coastal areas around the world. About 900 such zones have been identified, and there are undoubtedly hundreds more. Scientists have been studying coastal dead zones since the 1980s, and there is broad agreement about their causes and effects. I discussed them in Climate & Capitalism last month.[2]

This article focuses on a parallel development that has only been studied in the past 15 years or so — the growth of hypoxic (low-oxygen) and anoxic (zero-oxygen) areas in the open ocean, caused by global warming. They are not always physically separate from coastal dead zones — in the Baltic and Arabian Seas, for example, they overlap — but they develop and are expanding differently.

All of the oxygen dissolved in seawater, no matter how deep, originated at or near the surface, in one of two processes.

In most of the ocean, the upper 200 meters or so is called the surface or mixed layer. Waves, wind-driven currents and convection constantly stir its contents, making its temperature, salinity and dissolved gas content roughly uniform. Dissolved oxygen spreads through the mixed layer relatively quickly and evenly. 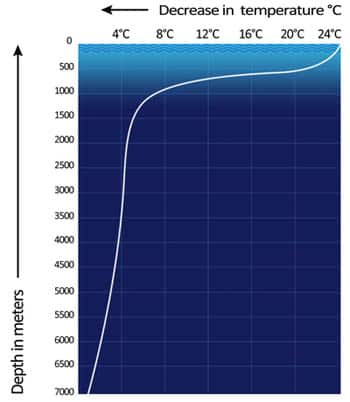 Typical ocean layers. Temperature falls rapidly in the thermocline, between the mixed layer (above 200 meters) and the deep layer (below 1000 meters) where temperature is nearly constant. Depths vary by latitude and season. Source: Wikimedia Commons

The mixed layer is warmed directly by sunlight and is constantly replenished by fresh water from rivers, rain and melting ice, so it is lighter (less dense) than the water below it, where a sudden temperature drop defines the thermocline, a colder and denser layer that separates the mixed layer from the cold and very slow moving deep layer that comprises about 90% of the ocean’s volume and mass. The thickness of the thermocline varies with seasons and latitude — in polar seas, it and the mixed layer scarcely exist — but in most of the ocean it extends from 200 to 1000 meters below the surface.

A variety of processes known collectively as ventilation move some of the mixed water, and the oxygen it contains, into the thermocline. The distribution of oxygen depends on local, regional and global currents, tides, local topography, unpredictable turbulence and other factors, so it is uneven. Most notably, in some parts of the thermocline a combination of weak ventilation and oxygen-consuming microorganisms results in pockets called Oxygen Minimum Zones. Most of the thermocline at that depth is teeming with fish, but life in an OMZ is largely limited to microbes that can survive with very little or no O2. 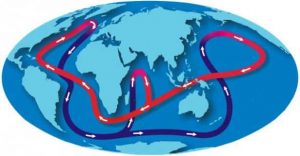 A different and much slower process plays a major role in distributing oxygen in the deep ocean. When water freezes in the North Atlantic, it leaves salt behind, creating a layer of dense brine that sinks to the bottom and slowly moves south, bringing along any oxygen it absorbed at the surface. Thus begins the Global Conveyor Belt, a slow deep-sea current that carries almost 20 million cubic meters of water per second —100 times more than the Amazon River — distributing oxygen and nutrients though the deep ocean. [3] A full circuit takes about 1000 years. By the time water from near Greenland reaches the North Pacific, most of the oxygen is gone: this contributes to the formation of an OMZ in the West Bering Sea and the Gulf of Alaska.

As we saw in Part One, ocean acidification is a direct result of skyrocketing CO2 emissions. Ocean deoxygenation has the same cause: greenhouse gases are heating the world, and over 90% of that additional heat has been absorbed by the surface layer of the ocean, reducing the ocean’s total oxygen and expanding Oxygen Minimum Zones.

Research into the details of deoxygenation is ongoing, but it is clear that climate change is responsible for most oxygen depletion in the open ocean. Three temperature-dependent processes — solubility, stratification and circulation, and aerobic metabolisms — are stealing the ocean’s breath.

Solubility. Basic physics: when water gets warmer, it can hold less dissolved oxygen. A given volume of water in the Arctic can absorb more oxygen than the same volume at the equator. If the water’s temperature increases from 4ºC to 6ºC, the amount of oxygen it can hold decreases 5%.

For many millennia, the two-way gas transfer across the air-sea interface was balanced, so the amount of dissolved oxygen in the ocean remained roughly constant. At some time in the past half-century, that balance was broken: the warming ocean began releasing more oxygen than it absorbed. A recent study estimates that between 1975 and 2005 the net loss of oxygen from the ocean to the atmosphere averaged more than a billion tons a year. If warming continues, that outgassing could nearly triple by 2100.[4]

Stratification and circulation. As we’ve seen, the ocean is divided by temperature and salinity into three sharply defined layers, with the least dense layer on top. Climate change has further reduced the density of the top layer, by warming the water, increasing rainfall, and melting glaciers. That makes it still more difficult for oxygen-rich waters to move into the thermocline.

Reduced solubility means that there is less oxygen in total, and increased stratification reduces the portion of the oxygen that circulates below the mixed layer. Since 1960, Oxygen Minimum Zones in the thermocline have grown 20%, from just over 25 million square kilometers to 30.4 million — to 8% of the ocean’s total area, and 7% of its volume.[5]

Global warming is also weakening the Great Conveyor Belt: the north Atlantic portion now carries 15% less water than it did in 1960. So far, no effect has been measured on deep ocean oxygen levels; that may reflect the current’s slow speed, or limited sampling of deep sea water. It has been estimated that at present warming rates, deep sea circulation will fall as much as 45% by 2100.[6]

Metabolic rates. When temperature increases, almost all chemical processes speed up, including the complex biochemical reactions that maintain life in all organisms. Metabolic rates increase in proportion to temperature — organisms need more oxygen to maintain the same level of activity. The effect is barely noticeable in warm-blooded animals such as us, because our bodies always use a great deal of energy to maintain a stable condition. But the respiration rates of cold-blooded organisms, which includes almost all marine life, increase substantially when the water gets warmer.[7]

So — while lower solubility and stronger stratification are reducing the supply of dissolved oxygen in seawater, aerobic respiration is increasing the consumption.

It is difficult to quantify the relative impacts of each of the three process, but so far solubility and stratification seem to have caused greater oxygen reductions than increased respiration. That is likely to change as global temperatures rise, because heat’s impact on metabolic rates is exponential. According to a recent study, “for 2°C warming, there will be a 29% increase in ocean oxygen consumption rates, and for 3°C warming, a 50% increase, leading to large-scale ocean hypoxia.”[8]

An Ocean Anoxic Event (OAE) is a period when the level of dissolved oxygen in a large part of the ocean plunges to (or near) zero. That has happened many times in Earth’s long history, most recently about 94 million years ago, when loss of oxygen wiped out a large proportion of marine life. As scientists associated with the Woods Hole Oceanographic Institution point out, ocean conditions today are similar to those that prevailed before that crisis, and are rapidly getting worse.

We are not yet in an OAE, but if oxygen loss continues to accelerate, large-scale extinctions of marine species are virtually certain. Even at present levels of deoxygenation, the damage is extensive.

“The vast body of evidence from temperate marine ecosystems and a few studies from tropical marine ecosystems demonstrate that hypoxia stress often results in catastrophic ecosystem simplification through loss of biodiversity, trophic complexity and fisheries.”[11]

In fact, any reduction in available oxygen, not just hypoxia, is problematic for most ocean life. Although some marine animals, jellyfish for example, are little affected by oxygen reduction, others go into decline when the level falls even slightly.[12] As a result, the population balance in areas where oxygen levels are falling tilts quickly towards hypoxia-tolerant species. Others flee or die.

As well as directly threatening the lives and habitats of marine organisms, oxygen depletion is disrupting the global nitrogen cycle. For hundreds of millions of years, naturally occurring Oxygen Minimum Zones have played a key role in the nitrogen cycle, because the bacteria that convert reactive nitrogen (Nr) compounds into inert nitrogen gas (N2) are triggered to do so only in the absence of oxygen. The expansion of OMZs means that growing numbers microbes are removing reactive nitrogen from the ocean, unbalancing the cycle and reducing the availability of essential nutrients for marine life.

What’s more, when bacteria convert Nr to N2 in the presence of small amounts of oxygen — that’s the case in most parts of OMZs — they also produce nitrous oxide (N2O), a greenhouse gas that is about 300 times more powerful than carbon dioxide and also depletes the ozone layer. Multiple studies have found large amounts of N2O rising from the ocean surface above OMZs. This is a classic positive feedback — global warming accelerates production of nitrous oxide, which in turn accelerates global warming.

Finally, it is important to bear in mind that oxygen depletion does not happen in isolation — for example, organisms that consume more oxygen also increase acidification by exhaling more carbon dioxide, and fish trying to escape oxygen-starved water find that alternative locations are too acidic. Part Three of this article will examine the third component of the deadly trio, ocean warming. As we’ve seen, higher water temperatures contribute to acidification and deoxygenation, but they are also playing a direct role in the destruction of marine ecosystems.

[3] Cold water also joins the conveyor near Antarctica, and the return path carries warm water from the tropics to the north. Any selected “beginning” on this vast metabolic cycle is arbitrary.

[7] Historical sidelight: the formula for calculating the effect of increased heat on the speed of chemical reactions was discovered by Svante Arrhenius, the Swedish scientist who was the first to show, in 1896, that CO2 emissions from burning fossil fuels could cause global warming.