‘Climate Change Solutions’ shows that capitalism cannot solve the climate crisis, but the alternatives it offers don’t meet the challenge 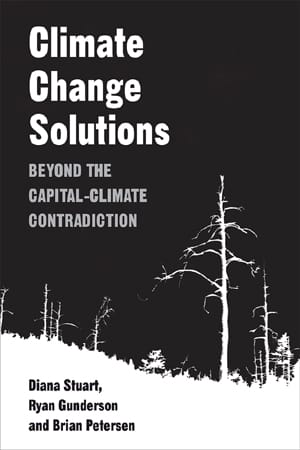 Wayne Deluca is a climate activist and IWW member who lives near Philadelphia.

Climate Change Solutions critiques proposed solutions to climate change under capitalism, and offers what the authors classify (following Andre Gorz) as “non-reformist reforms” that look beyond capitalism to relieve this crisis. In the first effort, it is highly successful; in the second, it offers some useful points but its framework is ultimately flawed.

The chapter critiquing green technology is the  strongest. Following the work of writers like John Bellamy Foster and Richard York, the authors look at attempts to “go green” by replacing fossil fuels with renewable energy through the lens of the Jevons Paradox and the energy boomerang effect. They show that, as William Stanley Jevons observed in the 19th century, increased efficiency leads to increased usage of energy. They follow this with an extended discussion of the energy boomerang which shows that, because of the treadmill of production, it is impossible to replace energy unit-for-unit in a capitalist economic system. The authors make a powerful demonstration that “in a growth-dependent economy, alternative energy sources are a capital accumulation strategy, as opposed to a resource conservation strategy.”

This is followed by a cutting critique of carbon markets, borrowing from Karl Polanyi’s notion of fictitious commodities. Here, the tendency of such markets to reduce nature to a commodity is examined, and contrasted with the need to decommodify the environment if radical change is to take place. Carbon markets are less in vogue now than they may have been ten years ago, but the critique remains useful and provides good insight on the idea of commodification.

Stuart, Gunderson, and Petersen then move to criticize geoengineering proposals, under two headings: strategic aerosol injection and various schemes for carbon sequestration or removal. They demonstrate that such technologies are unproven, have unknown potential consequences, and could leave the world in jeopardy. For instance, they show that using atmospheric aerosols and then stopping abruptly could result in catastrophic temperature increases. This alone derails most geoengineering ideas.

The authors further document that many fossil fuel companies and other climate denialists have thrown their support behind geoengineering projects which would continue the logic of fossil capitalism while attempting to mitigate its worst effects. A result is that the suite of proposals for geoengineering always includes already discredited technologies such as enhanced oil recovery that do not address climate change but are still profitable “green” technologies.

These chapters are a strong contribution to ecosocialist literature. They consolidate several important ideas and place them strongly in a context of critique of capitalism and its innate need to commodify and consume the environment. Unfortunately we must consider the remainder of this rather slim volume.

The fifth chapter focuses on degrowth, attempting to square it with the authors’ reading of critical theory. While recognizing the critiques levelled by John Bellamy Foster and others, they seek to revise degrowth ideas.. Unfortunately they insert so many caveats — it cannot be squared with capitalism, it is too localist for a global problem such as climate change, and it is too skeptical of renewable technologies outside of capitalism — that it is not clear what is left of degrowth other than the word.

After degrowth, Stuart, Gunderson and Petersen move on to work-time reduction and economic democracy. They show, rather dramatically, that an aggregate reduction in work hours would significantly decrease greenhouse gas emissions. Unfortunately this question is not pursued deeply enough to discuss whether this also involves a decrease in pay; the authors simply assume that it is desirable for workers to adopt “lower impact” lifestyles.

They fudge on several important concepts. First there is little clarity as to what exactly is meant by work-time reductions. Both lower hours and universal basic income (UBI) are floated as proposals without much specificity. Then the idea of economic democracy is advanced, but its content is vague. The most substantial direction the authors give is to mention Richard Wolff’s work on cooperatives, but without addressing how it could overcome the contradictions of capitalism that the authors themselves raise earlier in the book.

Somewhat better is the discussion of “socializing energy.” Despite a preoccupation with fitting this into the ideas of Herbert Marcuse, the general thrust here coincides with existing movements for energy democracy. Stuart, Gunderson, and Petersen make the significant observation that “Collective ownership alone is not a sufficient condition for furthering any political goal” but see community government of energy as a pathway to ending climate change.

The last chapter examining solutions is “Participatory Global Climate Governance.” Throughout the book, the authors have been rather coy as to their views on the state. Here, this becomes a serious defect. There is no concrete approach outlined, only vague hopes that social movements outside the institutions of global power and democratization inside them will somehow provide a way forward. This is admitted directly as a subhead calls such governance “unlikely but possible.” Sadly, this might well have been a subtitle for the book as a whole.

Finally they try to put their solutions together in “Another Way Is Possible.” Here the word “possible” has none of the boldness it did in the early anti-globalization movement. The authors offer at best a vague hope that some mixture of social democracy and “non-reformist reforms” will create enough of a space to address climate change.

The ideas put forward in Climate Change Solutions rely heavily on this concept of non-reformist reforms. Their goal is to directly undermine the conditions of the capitalist system, because they cannot be internalized. This explains why the authors adopt the degrowth concept, worker cooperatives, and global governance rather than an ecosocialism based entirely on sustainably meeting human needs.

The problem is that these are contradictory half-steps, and yet even those seem impossibly distant even in the most optimistic cases. Repeatedly, Stuart, Gunderson, and Petersen recognize that the labor movements and radical consciousness their solutions require do not yet exist or have the required strength to implement them. This is frustrating in a book that claims to offer solutions and even comes close to living social movements when it talks about energy democracy and degrowth, but ultimately can only proffer a vague hope that some other way might happen.

Ecosocialists have made a far more revolutionary proposition — system change, not climate change. Trying to dig around the margins and in dated New Left thinkers like Gorz and Marcuse for halfway steps will never lead to the kind of radical movements that would be needed to produce either result.

Despite its flaws, Climate Change Solutions is a book worth reading. It strengthens several good arguments about climate change and capitalism, and its lengthy bibliography points to a great deal of useful literature. Unfortunately it fails to offer a revolutionary path forward.