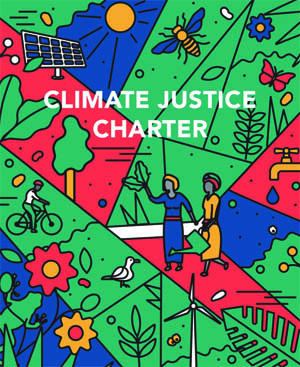 “As Africans, we live together on a vast and beautiful continent where the human story began. All of us are linked to the first human who walked upright, dreamed, thought and co-existed with plants, animals, rivers, oceans and forests. Today this common humanity and its future is in serious danger. South Africa cannot ignore this challenge. The continued use of oil, gas and coal to power our economy and society is making our world unlivable for all life.”

That paragraph opens the new Climate Justice Charter, adopted on August 28 by an mass online assembly of activists in South Africa. They describe the document as “a signpost; a trumpet call, to move all of us in the direction of system change now and for a Climate Justice Deal that ends the suffering of the most vulnerable and oppressed.”

On October 16, a national day of action to end hunger, thirst and climate harm, they will demand that parliament adopt the Charter as well.

“The South African state has to become a climate justice state that recognizes the climate emergency, whilst strengthening our democracy. It has to be guided by the vision, goals, principles and people-led systemic alternatives contained in this Charter and all its climate policies must be aligned to realize this Charter.”

The Charter is the result of more than six years of campaigning and discussion, organized by the climate justice charter movement, which includes the South African Food Sovereignty Campaign, and the Cooperative and Policy Alternative Centre, with grassroots input from water stressed communities, the media, labor, faith based communities, youth, climate scientists, academics, women’s organisations, environmental and social justice organisations, as well as think pieces by leading activists.

A conference in November 2019 consolidated a draft which was then placed online for public comment. A final round of public input was provided at a Climate Justice Assembly held on 16 June 2020.

The South African Climate Justice Charter is a major achievement, not just as a document, but as an example of how activists can build grassroots movements against capitalist ecocide. It deserves the widest possible circulation. To download the full text, click on the image above.