Some Asian countries have effectively contained the disease, while others have dramatically failed. What’s behind the differences? 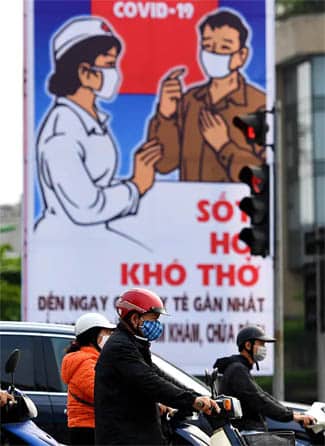 Vietnam’s mobilization against Covid-19 has been particularly effective

The evolution of the pandemic is particularly contrasted in Asia where it is much more difficult to compare national situations and policies than in Europe. However, we can try to identify a few lines of reflection, which are necessarily fragmentary.

The national dynamics of the epidemic vary considerably within the major groups of South Asia, Southeast Asia and the Far East. In each of these regions, states have contained the pandemic, sometimes remarkably, or have failed, often dramatically. The epidemic is particularly in full development in Indonesia, with 75,699 infections officially listed, though this is an underestimate, and 3,606 deaths, as of 13 July 2020. Why such differences?

A first element of response concerns the speed with which the authorities reacted. The longer the delay, the more virulent the epidemic became. This was obviously the case in China, the initial focus, which opened the door to the pandemic. Beijing has a very heavy responsibility here, but it is not alone. The pandemic first reached Europe, which has long become its main focus. Most European states reacted late, and thanks to this delay, the pandemic spread to other continents with a power multiplied by the density of trade specific to capitalist globalization.

Countries that have taken radical action without delay have been able to contain or even eradicate the epidemic (and have not helped to spread the pandemic). This is particularly the case for Vietnam with 372 cases recorded, no deaths and no new contamination for several weeks. This is also the case for Taiwan with 449 cases identified and 7 deaths. Thailand has 3,220 infected, including 58 deaths; most importantly, there has been no new contamination for more than 45 days.

Another noteworthy point is the role played by the basic health model. The intensive care capacity of a country like Vietnam is very low and yet, despite the very high risks (trade with neighbouring China), it has the best results. Indeed, basic preventive measures are not complex: tests, isolation of contaminated individuals, monitoring of people with whom they have been in contact, masks, hand washing, disinfection. In Sri Lanka, there have so far been “only” 11 deaths from 2,617 reported infections. This is explained by the fact that a highly developed public health system still exists, unfortunately threatened by neoliberal policies. In countries that have effectively contained the epidemic, public authorities have intervened in a coherent manner, often by mobilizing social networks for the implementation of health policies — whether by governments or administrations acting more or less autonomously of the political authorities, as in the astonishing case of Thailand.

Finally, let us recall the major roles the popular culture of hygiene (Thailand, again) and of epidemic risk, as well as the self-mobilization of populations, have played. This was particularly the case in Hong Kong, where the inhabitants immediately and spontaneously masked themselves, contrary to the initial positioning of the authorities. In Vietnam, social networks denounced a wealthy woman who tried to escape the compulsory quarantine for anyone returning from abroad. The people called to order those French present in the country, who judged the wearing of the mask useless based on the (false) statements of their government — a government that for weeks advocated the exact opposite of what it should have done, making necessity (a general shortage) into a virtue.

The Covid pandemic has a magnifying glass effect: it highlights realities behind appearances. France is no longer a power, but a dependent imperialist country endowed with an authoritarian regime which refuses to associate representations of the cared for and the caregivers in the development or the implementation of its health policy. More generally, the West is no longer the world’s yardstick, including in the medical field. More than ever, a Euro-centric vision leads to disastrous errors of judgment. When did our leaders realize that the pandemic was a danger? When Italy was hit; they remained blind to what was happening in Asia. Have they sought to learn from Asian experiences? They mostly disparaged them.

The problem is not new, as Pascale Brudon, who represented the World Health Organization in Vietnam during the outbreak of SARS in 2003, notes. At that time, WHO was still playing a role of effective international coordination and many national teams came to help and learn from this crisis … but almost no one from France. Interviewed by Mediapart (6 April, 2020), she said she was “frightened by the way in which public health systems have malfunctioned [in France], when we have already experienced major epidemics. When WHO released the list of country-by-country increases in cases in late January, there was still time to respond. There were really signals that were not heard.”[1]

Where the epidemic has not been eradicated, the risk of a rebound exists. South Korea has just had the painful experience of this. South Koreans have indeed decided to spend their holidays in their country, rather than traveling abroad … and the virus has spread again (a warning for France!). It can be reintroduced from abroad, especially since international economic exchanges are once again growing. Until the global pandemic is brought under control and while there is no effective treatment and no long-term protective vaccine, there is a risk of renewed epidemics. Thus, in Vietnam and Thailand, there are currently some new daily cases.

The quarantining of people entering a country (starting with nationals and residents returning home) has been a very effective measure, but we must understand its scope. On 25 March, there were 45,000 quarantined in Vietnam![2] An initial screening took place in particular at airports: anyone with symptoms (fever and so on) was sent to the hospital, the others were put into quarantine.

The “borders” of an epidemic are above all those of clusters, the foci of infection, which can be located anywhere: in the middle of a country, on either side or even on the edge of a state border (the case of Alsace, in France). Faced with the pandemic, all populations have linked fates. “Health in one country” is not sufficient and intergovernmental cooperation should make it possible to deploy united policies, but this is not the case. In Asia, as in most regions of the world, national borders still delimit the space in which public health policy is deployed, whether for better or for worse.

In the face of a pandemic, the transcendence of state borders is both a vital necessity and a present impossibility, all the more so since governments pursue health policies that are often contradictory to each other. It is a strategic horizon for which we must fight, but under difficult conditions and relationships of forces.

Health, hostage of the regimes

Asia is obviously hostage to a neoliberal world order which gives exorbitant strength to economic powers, but probably less than the European Union with its rules of “free and undistorted” competition and the deindustrialization of many member states. It also has its Donald Trumps, such as Narenda Modi in India or Rodrigo Duterte in the Philippines.

The pandemic is booming in South Asia. With a population of 1.4 billion people, India is the third placed country in terms of highest number of infections: 850,000 and 23,000 deaths recorded (the figures are considered to be very underestimated). The government has paid no attention to the “internal” migrant workforce (Indian and not foreign) who, on returning to their homes, spread the epidemic despite themselves. Note that in Singapore (45,000 infections), the 26 deaths are due to the fact that the authorities had done nothing to protect migrant workers. Even in times of health emergency, the authorities tend to “neglect” (non) citizens of the second zone, which, from an epidemiological (and humanist) viewpoint is an absurd blindness.

Narenda Modi bases his power on a Hindu ultra-nationalism (Hindutva). In the middle of the pandemic, he organized a pilgrimage of thousands of devotees to the Amarnath cave, located 3,900 meters above sea level in Kashmir (Indian side) and dedicated to the god Shiva, observing symbolic sanitary measures. A decision all the more worrying inasmuch as Modi’s nationalism is expansionary and has regional territorial aims.

The fight against the pandemic has also become hostage to the geostrategic conflicts that are woven around the World Health Organization (WHO). It was an effective vehicle for promoting basic health systems and providing reliable health information. The United States (and Big Pharma) has always questioned its operation – voting rights are not measured by financial contributions, but by country. Trump is part of this tradition all the more since, in general, he dynamites international forums for multilateral intergovernmental cooperation in the name of unilateralism. He has just started the process of withdrawing the US from WHO, which will be effective in a year if he wins the next presidential election.

Add to all this the fact that the epicentre of the geopolitical conflict between Beijing and Washington is today located in the Indo-Pacific theatre of operations where each state has to choose sides. Thus, Australia has decided to escalate tensions with China. We are not moving towards more cooperation, but more tension, in Asia in particular. Enough to make the pandemic happy!

Solidarity in times of pandemic

With the generalization of neoliberal policies worldwide, the balance of the dynamics of international solidarity has changed. The weight of the common struggle against universalised policies has increased, in addition to the “traditional” North-South solidarity (which obviously remains relevant).

The “magnifying glass effect” of Covid-19 confirms just how much this is true. In a global pandemic, a common north-south, east-west battle. In all the countries (to my knowledge) where “solidarity from below” is deployed, during lockdown in particular, similar initiatives have been taken to help isolated people, those who have been forgotten by government measures (undocumented migrants and so on) , ensuring the most basic needs: the popular canteens have become a symbol of this solidarity.

In Asia, the sectors of the population affected by “marginality” are very numerous. The popular relief organizations had to redirect their activities to face the emergency: responding to priority needs (food, daily hygiene kits, psychological or educational support and so on). They used their pre-existing solidarity networks for this. To this end, they have sometimes had to suspend programs designed over several years, because they work in often very difficult conditions which limit their possibilities.

Take the example of the MiHands coalition in Mindanao (in the southern Philippines), which coordinates a network of around 50 associations periodically mobilized to deal with humanitarian disasters of all kinds. The island is under martial law. The police or the army enjoy a veritable presidential immunity. Travelling is complicated and the degree of “tolerance” of the authorities (with whom it is necessary to collaborate to ensure aid) varies according to localities and times. Military conflicts are underway. The ancestral territories of the mountain people (Lumad) are particularly targeted. Companies covet their riches (wood, minerals) while these communities live in symbiosis with the forest. Faced with this situation, aid missions must be coupled with attempts to resolve conflicts, with the support of another progressive coalition. There is no indication that the situation will improve in the future and the activists running these networks are experiencing exhausting stress.

We are fighting a common struggle, but in countries like the Philippines, our partners are continuing it under infinitely more difficult conditions. They deserve our support.[3]