Not just renewable energy, but global system change! A call to arms for a transformative approach to energy and a new society. 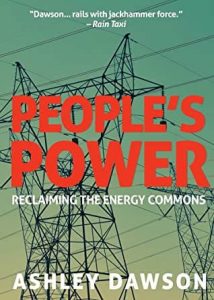 In the aftermath of the Russian Revolution Lenin said that Communism would be “Soviet power plus the electrification of the whole country.” Lenin outlined how industrial development wasn’t possible without electrification, but the primary emphasis on Soviet power arose from his view of Communism as being a society were Soviets, workers’ councils based on mass participatory democracy, would control and run the means of production.

I was reminded of Lenin’s quote on several occasions while reading Ashley Dawson’s latest book People’s Power. Dawson argues that, given the great environmental crises we face, in particular climate change, the “great task” of our time is to end the fossil fuel infrastructure at the heart of capitalist society. But, he shows, it is not enough to do this simply through a transition to renewable energy. This will be insufficient “to avert climate chaos.”

“Unless we dismantle and replace a capitalist system based on extreme extraction, inexorable growth, mounting inequalities, militarism and colonialism, our headlong rush toward extinction will continue. We need not just decarbonization, but global system change.”

A little later he continues:

No wonder I found myself reaching for that Lenin quote.

Dawson, who is based in the US, takes a highly critical look at the existing US energy system. It is a chaotic mix of power companies and suppliers, a highly unsuitable electrical grid and a system trapped by the logic of capitalist accumulation around fossil fuels. It is also a energy system that has been at the heart of both transformation vision and class struggle. Dawson shows how different visions of energy supply were present at the birth of the US electrical era. One were the system was organised for public good, the other for corporate greed. Dawson explains how in 1926 Gifford Pinchot argued for the transformation of the Pennsylvanian electrical grid. Pinchot said about the transition to electricity from stream power:

“It behooves us not to let it break upon us unawares, not to permit generations of needless bitter conflict to follow it, but to think out the problems it will create, and to take measures in advance to avoid the long train of struggle and disturbance which followed the last great change in industrial power.”

It would be easy to chastise someone like Pinchot for naivety in the face of capitalist industrial power, but his vision remains important to us, not least as around 1.1 billion people do not have access to electricity today. With the need to offer everyone in the world equitable access to energy, at the same time as making sure that we aren’t tipped into runaway climate change, this remains the central question for Dawson. How can we supply energy safely, cheaply and sustainably for all?

Much of the book points out the barriers. The power and immense wealth of the energy corporations. The centrality of fossil fuel to capitalism. The way that politicians and capitalist states have used their close links to coal, oil and gas companies to prevent the introduction of renewables or energy reduction measures. Many of the these examples are from the United States, but their are parallels for all of us living in the Global North. Even “liberal” politicians like Obama have used their positions to encourage the development of new sources of fossil fuels like shale gas.

In contrast Dawson highlights the mass, collective struggles that have fought to provide energy to those that lacked it, and to move towards renewable energy over fossil fuels. I was, I’ll admit, initially disappointed by Dawson’s focus on German movements that have (successfully) collectively fought to setup local renewable cooperatives and the like, by-passing big national corporations.

I was worried that Dawson was heading down a path of arguing that we could build sustainable spaces within the existing capitalist system. But actually Dawson’s approach is more nuanced. He shows how these sort of community campaigns can make real change, transforming the national political agenda, and putting the corporations on the back foot, even though the capitalists do fight back and seek to regain their position by supply Green energy. At root, what is needed, Dawson explains is real democracy, control and management from below.

“Do legal paradigms already exist to help community-based organisations… escape from the clutches of fossil capital and adopt solar power on a mass basis? What are the limits … and what juridical innovations might address these limits? These questions all relate to much broader struggles to establish new, revolutionary forms of popular sovereignty to defend and extend the commons, but they have a particular import for the fight for energy democracy. The struggle for a rapid and just energy transition is at the core of broader struggles…. The question of the energy commons is therefore fundamental to the fight for a collective future.”

Of course such arguments fly completely in the face of capitalist logic. Ultimately this means that winning such gains on the scale required means a challenge to the capitalist system, and in particular the state. Unfortunately I think that Dawson’s argument around this is undermined by his reliance on the analysis of the state provided by the Greek-French Marxist Search Results Nicos Poulantzas, who concluded that the analysis of the state developed by Lenin meant a “permanent scepticism about the state [which] precluded the possibility of mass intervention in existing politics.”

In contrast Dawson quotes James Angel arguing that the state “was not to be discounted as a ‘mere instrument of capital’.” Personally I think this is inadequate. After watching the crushing of the Paris Commune in 1871, Marx concluded that workers cannot simply take over the machinery of the state but find new ways of organising. Engels wrote that the state was “armed men but also of material adjuncts, prisons, and institutions of coercion of all kinds.”

I think that analysis fits more closely with how governments behave in supporting fossil fuel corporations. But more importantly I think this approach to the state helps answer that important question that Dawson raises. How will we make the urgent change we need?

The answer lies in workers’ power — the new organs of working class democracy that revolutionary movements throw up. That’s not to say we should shun any attempts to build alternatives to the fossil fuel corporations today — though, as Dawson highlights, we need to be honest about the limitations of these within capitalism. In fact Dawson’s final chapter is a brilliant challenge to those who think we can build space within capitalism that can save the planet on its own.

“Unlike leaves … solar panels do not grow on trees: they must be manufactured, using chemicals that are often highly toxic and in conditions that do not escape the conditions of labour exploitation and degradation that characterise the era of fossil capitalism…. Eventually, the question of controlling the means of production returns … and energy transition that maintains existing forms of capitalist production and infrastructure will be nothing short of devastating for the planet and vulnerable frontline communities.”

Ashley Dawson’s book is a devastating critique of fossil fuel capitalism. Its a call to arms for a transformative approach to energy that places collective ownership, democracy and the rights and needs of everyone at the heart of the struggle for a sustainable planet. My minor criticisms aside, this is a really excellent read.

Martin Empson is a socialist and environmental activist in Manchester, UK. This review was first published on his blog, Resolute Reader.