When population is cast as the problem, restrictions like fertility control, heightened borders, dispossession, detention and imprisonment are posed as the solutions 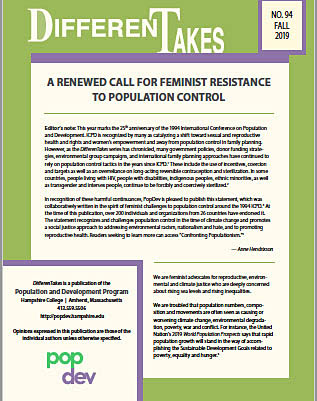 When population is cast as the problem, restrictions like fertility control, heightened borders, dispossession, detention and imprisonment are posed as the solutions

Climate & Capitalism is proud to be among the individuals and organizations from 26 countries that have endorsed this important statement, initiated by our friends at PopDev.

This year marks the 25th anniversary of the 1994 International Conference on Population and Development. ICPD is recognized by many as catalyzing a shift toward sexual and reproductive health and rights and women’s empowerment and away from population control in family planning.

However, as the DifferenTakes series has chronicled, many government policies, donor funding strategies, environmental group campaigns, and international family planning approaches have continued to rely on population control tactics in the years since ICPD. These include the use of incentives, coercion and targets as well as an overreliance on long-acting reversible contraception and sterilization. In some countries, people living with HIV, people with disabilities, indigenous peoples, ethnic minorities, as well as transgender and intersex people, continue to be forcibly and coercively sterilized.

In recognition of these harmful continuances, PopDev is pleased to publish this statement, which was collaboratively written in the spirit of feminist challenges to population control around the 1994 ICPD. At the time of this publication, over 250 individuals and organizations from 26 countries have endorsed it.

The statement recognizes and challenges population control in the time of climate change and promotes a social justice approach to addressing environmental racism, nationalism and hate, and to promoting reproductive health.

A RENEWED CALL FOR FEMINIST RESISTANCE TO POPULATION CONTROL

We are feminist advocates for reproductive, environmental and climate justice who are deeply concerned about rising sea levels and rising inequalities.

We are troubled that population numbers, composition and movements are often seen as causing or worsening climate change, environmental degradation, poverty, war and conflict. For instance, the United Nation’s 2019 World Population Prospects says that rapid population growth will stand in the way of accomplishing the Sustainable Development Goals related to poverty, equality and hunger.

Today’s population politics echo past predictions about the dangers of “overpopulation.” However, the focus is not solely on global numbers, as in the era of the “population bomb,” but on the supposed too many young people, mainly in parts of Africa and South Asia. In international security analyses, young men are often characterized as part of a dangerous “youth bulge.” Economic analyses position young women as lucrative capital who can help nations reap demographic dividends with their perceived labor. Reproductive choices are thought to determine global futures and curbing young women’s fertility is a priority for many policy-makers and organizations. At the same time, as the world adjusts to the trend of “aging” national populations and lower fertility rates, policies that promote child-bearing and pressures to “perfect” children are on the rise. In this context, selective reproductive practices and technologies contribute to damaging valuations of who should exist.

Donor-driven development, as well as strands of environmental activism, have ushered in urgent calls for population reduction to lessen the future impacts of climate change. This occurs in the name of empowering women, uplifting the poor, and protecting the environment. In many cases, the language of social justice or human rights is used to obscure the narrow focus on population reduction. These calls may counter Far Right populisms that deny climate change, but they continue to stigmatize the poor while states retract from the provision of public services, and can also buttress right-wing xenophobia.

When population is cast as the problem, restrictions like fertility control, heightened borders, dispossession, detention and imprisonment are posed as the solutions. Many right-wing advocates decry population pressures as the reason for cross-border migration and call for racist anti-immigration policies. These policies target marginalized groups such as immigrants, refugees and racial, ethnic or religious minorities through mass deportation, detention, incarceration or fertility control.

We are concerned that the current population establishment, which includes international organizations, donor governments, philanthrocapitalists such as the Bill & Melinda Gates Foundation and large pharmaceutical corporations, is over-reliant on long-acting reversible contraception (LARC). Today’s LARC methods include Jadelle (Norplant II), Nexplanon (Implanon) and the Sayana Press (Depo-Provera), which have significant adverse effects and high rates of discontinuation. The policies which promote them often emphasize fertility control over other sexual and reproductive health considerations, like HIV transmission, acquisition, and treatment. These programs reintroduce targets like FP2020’s ‘120 by 20’ and volume guarantees on contraceptive sales. In some cases punitive measures or conditional access to welfare provision violate rights and bodily integrity. Further, in the wake of ethical breaches in the ECHO trial, a human clinical trial to determine if Depo-Provera increases HIV transmission, we are concerned with unanswered questions and further, that the priorities of contraceptive testing and dissemination are set by Big Pharma and philanthrocapitalists who rely on the exploitation of black and brown people whose bodies are considered “testable.”

We take seriously the devastating and uneven impacts of climate change, the loss of biodiversity and the ongoing drive for economic growth, expanded profits, extractivism and privatization of land, forests and water, at the expense of the environment and health. However, we challenge climate change platforms that cast it as a population or international security problem. Military build-up and increased border security create environmental hazards—the US military is one of the greatest carbon emitters. The use of military tactics in environmental conservation can lead to unacceptable violence in controlling and patrolling land, and to sterilization abuses. In a similar vein, the initiatives currently in the name of “Climate-Smart Agriculture” can intensify environmental problems, spread toxins, and promote exclusive land use.

Time for a New Approach

This year marks the 25th  anniversary of the 1994 International Conference on Population and Development in Cairo, Egypt. At that conference feminist advocacy led to the foregrounding of sexual and reproductive health and rights (SRHR) over population control. ICPD25 will be held November 2019 in Nairobi, Kenya to “urgently finish the unfinished business of the landmark ICPD Programme of Action and to achieve the Sustainable Development Goals (SDGs) by 2030.” “Harnessing the demographic dividend” is one of the conference goals, which entails population reduction to ensure a working age population with fewer dependent children as a strategy to promote economic prosperity.

We challenge this formula for health and wealth, even though we too support sexual and reproductive health, rights, and justice, including safe and accessible abortion. These fundamental health services should promote bodily autonomy rather than serving economic or environmental agendas. The idea that population reduction is the first-step to progress is a flawed assumption that can dangerously narrow SRHR, particularly when promoted as an “urgent” priority.

We call for a social justice approach to supporting people and the planet and write in the spirit of previous feminist resistance that called for a new approach to women, population and the environment. We build from the foundational work of the Black scholars and activists who created the concept of reproductive justice to highlight the racial, economic and social inequalities in reproductive politics and to promote bodily autonomy, the right to have children, the right not to have children, and the right to parent children in healthy environments. We stand with the People’s Health Movement and their advocacy for health and social justice.

We call for integrated responses to climate change, environmental racism and toxicity that promote health, including sexual and reproductive health, through social, reproductive and climate justice frameworks. As part of this web of actions, we demand that governments, international agencies and other social institutions:

This statement was produced by Anne Hendrixson of PopDev, the Population & Development Program at Hampshire College, in collaboration with Ellen E. Foley, Rajani Bhatia, Daniel Bendix, Susanne Schultz, Kalpana Wilson, and Wangui Kimari. We thank Sarojini Nadimpally, Betsy Hartmann, Marlene Fried, Christa Wichterich and Daniela Gottschlich for their comments. We invite you to add your name, affiliation, and location by email: popdev@hampshire.edu.  Comments are also welcome. Affiliations for individuals are recorded for identification only.