Mary Robinson wants change, but her commitment to global elites prevents her from confronting the system that causes and maintains global injustice. 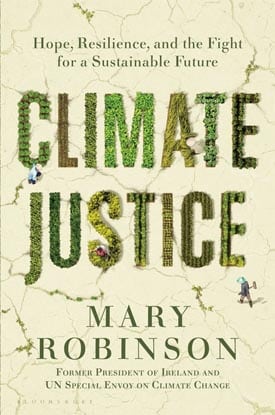 Mary Robinson wants change, but her commitment to global elites prevents her from confronting the system that causes and maintains global injustice.

reviewed by Hans A. Baer

The former president of Ireland is undoubtedly sincere in her determination to fight climate change and “putting people at the heart of the solution.” Unfortunately, her new book shows that sincerity is not enough.

In addition to heading her own climate justice foundation, Mary Robinson is the former UN High Commissioner for Human Rights and UN Special Envoy on Climate Change. She is, in short, an insider in the rarefied world of elite climate negotiations.

She understands that “the most disadvantaged across the world [are] suffering most from the effects of climate change.” For her, the climate change mitigation and climate justice requires conquering “poverty and inequality” and “empower[ing] those who have been left behind and neglected.” In Climate Justice, she tells some of their stories, along with accounts of the work of climate activists she has met through her involvement in UN climate conferences and related events.

Most of the book is devoted to heart-rending personal accounts of the hardships that indigenous and poor people are experiencing, from Uganda to Mississippi to Alaska to Chad. She looks at the plight of fossil fuel workers who need to be “part of the struggle for climate justice” as the world gradually shifts to renewable energy. Ken Smith, for example, is a tar sands worker in Fort McMurray, Alberta who is working for a “just transition” by preparing his fellow workers at Suncor to for a decarbonized world.

She also tells of more privileged individuals who apply their skills to climate action. These include Vi Thi Hien, who left academia to work on Vietnam’s biodiversity and Natalie Issacs, a Sydney socialite who abandoned her skin-care and beauty products company to encourage affluent women like herself to cut back their carbon emissions.

While admitting that it is “fragile foundation for action,” Robinson believes that the Paris Agreement is a “resounding endorsement of the principles of climate justice,” that vindicates the work of the activists whose work she recounts. She hopes “that countries will keep to their INDC targets primarily out of concern for the planet, and secondarily for the risk of being publicly shamed by their global peers as climate change footdraggers.”

Robinson places hope for climate change action in efforts such a climate change alliance of US cities, states, and businesses, and the C40 Cities Leadership Group. She believes that economic growth “built on sustainable energy and land use,” will “safeguard the lives of the most vulnerable from the effects of climate change and offer the best chance of lifting more communities out of poverty.”

What she does not address is how such objectives can be achieved without radical social and economic change. How can she reconcile a desire for environmental sustainability with her membership in the B-Team, a group of business leaders (formed at Davos!) that includes Richard Branson, whose Virgin Galactica project promises space tourism for the very wealthy?

Robinson acknowledges the need to reduce social inequality, but fails to confront the growing concentration of wealth in most countries in the world and the persistence of major social inequalities. Essentially her book domesticates the notion of climate justice, reducing it to a moral problem that can be solved by persuading the rich to do better.

In the end, the main value of Climate Justice to ecosocialists and climate justice activists is as a cautionary tale about the willingness and ability of the capitalist class and its political allies co-opt progressive concepts and causes. I don’t question Robinson’s good faith, but ultimately she is committed to the elite that dominates UN climate change conferences and the World Economic Forum. The climate activists whose stories are recorded in Climate Justice may be allowed to speak, but real change isn’t on the agenda.

Hans Baer is a Principal Honorary Research Fellow at the University of Melbourne. His most recent book is Democratic Eco-Socialism as a Real Utopia.