In ‘Burning Up’ Simon Pirani shows why fossil fuel consumption has grown so fast, and why only radical social change can prevent climate disaster now 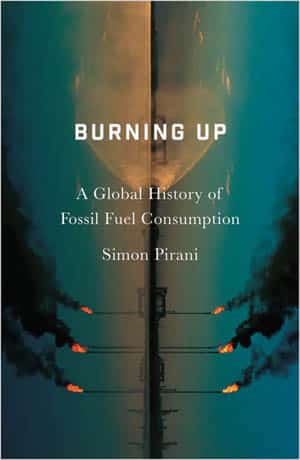 Of all the fossil fuels ever consumed, more than half were burned in the last 50 years

In ‘Burning Up’ Simon Pirani shows why fossil fuel consumption has grown so fast, and argues that only radical social change can prevent climate disaster now

Luke Neal is an activist who lives in Berlin.

Simon Pirani’s Burning Up is an important account of the history of fossil fuel consumption. Full of lessons and insights into the challenges posed by climate change, it is not just a work for historians or scholars. It deserves a wide and urgent discussion.

“The challenge,” Pirani says, “is to understand exactly how political, social and economic forces combined to produce a disaster of this magnitude.” He has met that challenge though extensive research on the relationship of fossil fuels and the world economy, and by then drawing the necessary political conclusions — ecological socialism — that flow from analyzing that relationship.

The book’s focus is from 1950 to the present: the period described by the Anthropocene Working Group as the great acceleration, beginning a new epoch in geological history. It traces the postwar boom. made possible by cheap oil, through the drastic price raises of the 1970s and the industrial restructuring and new growth in coal and gas that resulted. The expansion of the world economy in the 1980s called forth still more fossil fuel infrastructure, and that has continued since.

The leading capitalist states have consistently adopted policies to facilitate accumulation using this infrastructure, for example by easing the link of petrol-based transport to employment regimes through subsidies and cuts to fuel taxes.

Pirani follows this history into the 21st century, when global fossil fuel consumption — primarily coal — grew at a faster rate than at any time in history. Renewable sources accounted for just 5% of world electricity in 2015 — fossil fuels are still overwhelmingly dominant. The transition towards has hardly begun.

A key theme of the book is that technology is embedded in social systems. Pirani emphasizes the importance of technological systems rather placing responsibility on individual consumers or the poor. High consumption and pollution result from the nature of technology and the society that produces it. Therefore “obstructions to the future transition are political and social, more than technological.”

This weighs strongly against individualized population-based explanations of climate change that dominate discussion, such as in the work of the Intergovernmental Panel on Climate Change (IPCC).

The IPCC was formed in 1988 and the first major international agreement was adopted in Rio in 1992 — politicians promised to stabilize greenhouse gas emissions, but adopted no targets or coordinated energy policies. As Pirani puts it, the “imperatives of capital accumulation trumped the need for collective state action.” By 2005, world CO2 emissions were not 20% lower but 35.3% higher.

Arguably the most progress we have seen was in 2007 when the European Commission set targets aimed at reducing emissions to 30% beneath the 1990 level by 2020, leading to the beginnings of institutional support for renewable energy technologies. In China the 11th, 12th and 13th Five Year Plans (spanning 2006-2020) contained “robust” energy efficiency measures, alongside a serious push to relocate and reduce coal (though due to urban air pollution rather than concern for global warming), and “substantial investment” in wind power. But these measures were followed by failure to agree at all in Copenhagen in 2009.

In 2015 in Paris the big powers said they would limit the rise of global temperature to 2°C, and to 1.5°C if possible, but abandoned any effort to agree on emission reductions — each state would decide its own “Nationally Determined Contribution.” Climatologists estimate that “if all the [Paris] pledges were kept, global average temperature will rise by 2.7°C, as opposed to the 1.5°–2°C targets (and by 3.6°C if policies are unchanged).” Since then the IPCC has raised its evaluation of the dangers posed by a 1.5°C increase.

The political perspective that Pirani puts forth builds directly on his study of the world economy’s dependence on fossil fuels and the failure to change course over the last 30 years. They are not easy answers, but the necessary, difficult, radical ones.

For Pirani, the issue is not about implementing the right technologies, but of being capable to “beat the inertia of existing social and economic systems” that maintain and profit from the continuation of fossil fuel dominated production. The transition to a sustainable energy system cannot be separated from a transition to a sustainable and egalitarian society. It is not just a question of how energy is produced, “but also the technological systems that consume it and the social and economic contexts in which they operate.”

Making this societal transition will require breaking the resistance of groups that have an interest in keeping fossil fuels in circulation. It means abandoning the idea that elites who have failed to take meaningful measures for 30 years are capable of addressing problem at all.

Pirani notes that progress to this point has come outside of the UN framework, from struggles from below that have forced concessions over the provision of energy. For example, when the apartheid system collapsed in 1994, just 40% of South Africans had access to electricity. A township-organised protest movement which demanded and forced change drove that to 73% by 2006. Such movements show the way forward.

My only disagreement concerns the agents of change. Pirani is not wrong to suggest that civil society, mass disobedience and direct action are playing a major role in the climate movement. And clearly a wide coalition is needed, and is to some extent starting to take shape. But that cannot compensate for the weakness of organised labor, the only force with the potential of making systemic change in the struggle for climate justice. Our discussions of climate change must have an explicit working class orientation, whatever the present state of the workers’ movement.

These must be combined with a vision of a future in which social change transforms not only property relations but also the labor process through which humans relate to nature. That vision offers the most compelling alternative to the dogma of economic growth and the assumed inevitability of exploitation, inequality, and worse. Such a transformation would offer the best conditions for a transition away from fossil fuels.

Burning Up is a vital contribution to the climate movement. A first step to organizing around its insights will be to ensure it is widely read in the movement, and by those whose lives will be affected by climate change.