Corporate giants are driving the world towards environmental disaster. Will self-preservation force them to pull back and end the destruction? 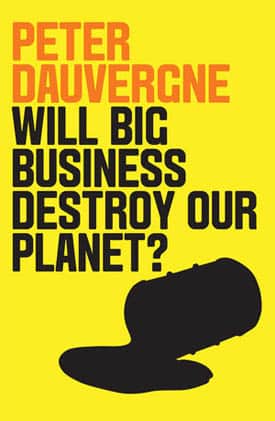 Corporate giants are driving the world towards environmental disaster. Will self-preservation force them to pull back and end the destruction?

The Earth system is in crisis. Summer after summer, unprecedented temperatures warm the seas, leading to ever stronger and more destructive winds that fuel raging forest fires and destroy lives. Fish stocks are collapsing and plastics in the oceans are killing migratory birds. Industrial effluents leach into aquifers. Sixty percent of primate species are heading towards extinction in this century.

Peter Dauvergne’s latest book asks, who is to blame? Given the devolution of governance to private entities, the very agents that produce the environmental crisis, could it be the big business?

In the twentieth century, giant Trans National Corporations became public actors whose activities shaped our lives, exposing them to conflicting demands. Shareholders’ interests rested on the pursuit of profit, but the wider population demanded a check on activities that contribute to environmental and social degradation.

In the midst of this conflict of interests arose the notion of Corporate Social Responsibility (CSR), promising a win-win-win situation but largely a public relations strategy aimed at placating criticism while changing practices only in so far as they do not conflict with the core goals of growth and profit.

CSR is part of ‘eco-business,’ a concept Dauvergne developed with Jane Lister in a book of that title. It involves “putting in place tighter controls to manage risks and uncertainties within global supply chain.” By pursuing activities that seemingly address environmental sustainability and ethics the TNC appeals to concerned consumers and deflects criticism, while making itself more competitive, without changing its core aims.

The very same companies that seek public approval are behind organizations such as the Forest Stewardship Council, the Marine Stewardship Council and the Roundtable on Sustainable Palm Oil, which supposedly certify that products meet high standards. Dauvergne justly compares that to trusting arsonists to be our firefighters.

Despite this, in his final chapter, Dauvergne concludes that, No, big business will not destroy our planet. In his view, “big business self-preservation will prevent total destruction.” Because businesses constantly devise newer and more efficient ways to manufacture, transport and dispose of their goods, he argues, ultimately growth will be completely decoupled from the material base so that growth can proceed unhindered, while the environment stays undamaged.

He does not analyze the systemic logic of capitalism – the fact that it relies on both nature and labor in the production of surplus value, and all commodities contain embodied resources and labor. His analysis of business and markets is abstract, unconnected to the social and economic relationships that make them possible.

Dauvergne has faith that technological innovations, rather than changes in the system, will save us. He states that “buildings are meeting higher water, waste, energy and emission standards,” that “highways are more durable and road construction does more to account for habitat disruption,” and that pollution decreases in more “well-off cities” such as London. This technological fetishism illustrates the difficulty of distancing ourselves from the logic which treats the social realm as separate from the material.

Technological innovation is just another strategy of capital accumulation, resting on the unequal exchange of resources. It is no coincidence that Dauvergne’s major example of environmental improvement is the great imperialist metropolis of London, a city that was built on global plunder. He effectively acknowledges this when he states that “when governments and firms are claiming to be solving a problem they are in fact deflecting the problem into another jurisdiction or into the future.” Such statements make it hard to understand how he reaches his confusing and contradictory conclusion.

Despite accepting Bakan’s assertion that corporations are pathological organizations, Dauvergne ultimately has great faith in technological fixes and corporate morality. His book does a good job of exposing the double standards inherent in corporate sustainability efforts, but ultimately it endows arsonists with fire trucks.