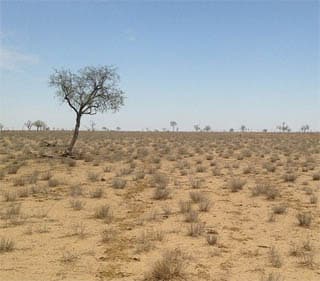 With confirmation that 100% of New South Wales is now officially in drought, it is clear that the federal government’s climate change denial is putting agriculture and the planet at risk.

Agriculture minister David Littleproud reckons “it’s a big call” to say that the drought ravaging large parts of the country is linked to human-induced climate change.

National Party Senator Barnaby Joyce, who represents the drought-stricken region of New England, told Sky News that same day that the drought is “a natural disaster” and that lowering emissions will have no effect on climate change: “Do you honestly believe what we do in Canberra is going to change the climate? It’s not.”

Littleproud and Joyce’s denialism is just latest example from a government refusing to take serious action to prevent runaway climate change. Their reasoning: It’s not human induced, therefore there is nothing humans can or need to do to prevent it getting worse. Convenient lies from a government aligned to the big fossil fuel and mining interests.

This political alignment means the government is limited to just tinkering around the edges of the climate crisis – for example, releasing a pitiful drought relief package, while cutting funding to land-care programs, or insisting states sign up to a National Energy Guarantee that will hand over responsibility for COs emissions reductions to the energy providers.

In the words of one organic farmer in Queensland, “At the federal level there is a climate information vacuum of truth and at the state level there is no action. Governments have stripped dollars out of rural Australia through cutbacks in catchment management programs and landcare.”

Climate change knows no borders. What Australia is experiencing is part of a global crisis.

People are dying in record numbers in heatwaves in Japan, Canada and parts of Europe.

California is experiencing wildfires so intense that they have created their own weather events, including tornadoes.

Devastating fires are destroying lives and land across parts of Europe and burning as far north as the Arctic Circle.

On current trends, the world may face catastrophic warming within a generation or two, with large parts of the planet becoming uninhabitable and major food growing regions facing ruin by drought or rising seas.

A recent study by leading international climate scientists, Trajectories of the Earth System in the Anthropocene, concludes that even if the target set in the global Paris Agreement on climate change of a 1.5-2°C rise in temperature is met, the risk still exists “that a cascade of feedbacks could push the Earth system irreversibly onto a ‘hothouse Earth’ pathway.”

This could lead to average temperatures up to 5°C higher than pre-industrial levels and rises in sea level of 10-60 metres. At that point much of the Earth would be uninhabitable.

This frightening revelation is not new, however.

Thirty years ago, NASA scientist James Hansen testified to US Congress that the age of climate change had arrived.

We also now know that Big Oil knew as far back as the late 1970s that burning fossil fuels was causing climate change. In May 1981, in a paper written for Exxon’s head of research, company scientist Henry Shaw estimated that global temperatures would rise by 3°C if a doubling of carbon dioxide emissions occurred, with the potential to cause catastrophic impacts as early as the first half of the 21st century.

But to implement these measures will require taking on powerful corporate interests. To succeed, we need to build a mass movement that has the power to bring them to heel.

We have already seen what can be achieved when people organise and combine in numbers – look at the success of the Bentley Blockade, the Franklin Dam campaign, the Lock the Gate movement and the Stop Adani campaign.

Activists will be mobilizing around the globe on September 8 as part of the Rise for Climate initiative.

Locally, activists are preparing to take action around coal exports in Newcastle over September 12-15 and local Stop Adani groups are campaigning to stop the federal government from giving Adani up to $1 billion in taxpayer money through the Export Finance and Insurance Corporation (EFIC).

Building these campaigns is a key part of this process.

Moreover, turning this situation around permanently will require a radical shift: one that takes us beyond the current political, economic and social system that puts profits ahead of human survival – capitalism – to a system that is ecologically sustainable and people-centred – socialism.