Climate scientists: A global increase in the most intense tropical storms due to global warming is not just predicted by models but is already happening.

Climate scientists: A global increase in the most intense tropical storms due to global warming is not just predicted by models but is already happening.

Originally posted on May 30 on Real Climate, a website we highly recommend to anyone interested in climate science.

Kerry Emanuel is a professor of atmospheric science at MIT. Jim Kossin is a NOAA climate scientist specializing in tropical cyclones. Michael Mann is a professor of Meteorology at Pennsylvania State University, Stefan Rahmstorf is the head of Earth Systems Analysis at the Potsdam Institute for Climate Impact Research.

Friday marks the official start of the Atlantic hurricane season, which will be watched with interest after last year’s season broke a number of records and e.g. devastated Puerto Rico’s power grid, causing serious problems that persist today. One of us (Mike) is part of a team that has issued a seasonal forecast (see Kozar et al 2012) calling for a roughly average season in terms of overall activity (10 +/- 3 named storms), with tropical Atlantic warmth constituting a favorable factor, but predicted El Nino conditions an unfavorable factor.  Meanwhile, the first named storm, Alberto, has gone ahead without waiting for the official start of the season.

In the long term, whether we will see fewer or more tropical cyclones in the Atlantic or in other basins as a consequence of anthropogenic climate change is still much-debated. There is a mounting consensus, however, that we will see more intense hurricanes. So let us revisit the question of whether global warming is leading to more intense tropical storms. Let’s take a step back and look at this issue globally, not just for the Atlantic.

Tropical storms are powered by evaporation of seawater.  More than 30 years ago, one of us (Emanuel) developed a quantity called potential intensity that sets an upper bound on hurricane wind speeds. In general, as the climate warms, this speed limit goes up, permitting stronger storms than were possible in the past.

Of course there could be other changes in the climate system that counteract this – e.g. an increase in wind shear that tears the hurricanes apart, changes in the humidity of the atmosphere, or increases in natural or anthropogenic aerosols. This question has been investigated for many years with the help of model simulations. The results of numerous such studies can be summarized briefly as follows: due to global warming we do not necessarily expect more tropical storms overall, but an increasing number of particularly strong storms in categories 4 and 5, especially storms of previously unobserved strength. This assessment has been widely agreed on at least since the 4th IPCC Report of 2007 and reaffirmed several times since then. A review article in the leading journal Science (Sobel et al. 2016) concluded:

“We thus expect tropical cyclone intensities to increase with warming, both on average and at the high end of the scale, so that the strongest future storms will exceed the strength of any in the past.”

Models also suggest that atmospheric aerosol pollution may have weakened tropical storms and masked the effect of global warming for decades, making it more difficult to detect trends in measurement data.

What do the data show?

Nevertheless, observational data support the expectation from models that the strongest storms are getting stronger. We focus here on the period from 1979, because this is the period covered by geostationary satellite data (thus no cyclones went unobserved) and also the period over which three quarters of global warming has occurred. These data show an increase in the strongest tropical storms in most ocean basins (Kossin et al. 2013). However, these data are not homogeneous but are estimated from a variety of satellite, and air- and ground-based instruments whose capabilities have improved over time. The homogenization of these data by Kossin et al. (2013), which is generally recognized as very careful, reduces the trends, but does not eliminate them. The strongest increase can be found in the North Atlantic (which is more than 99% significant) where the trend has likely been boosted by the decrease in sulfate aerosols over this period.

One consequence of this increase is that in most major tropical cyclone regions, the storms with the highest wind speeds on record have been observed in recent years (see Fig. 1 based on reanalysis by Velden et al. 2017). The strongest globally was Patricia (2015), which topped the previous record holder Haiyan (2013). 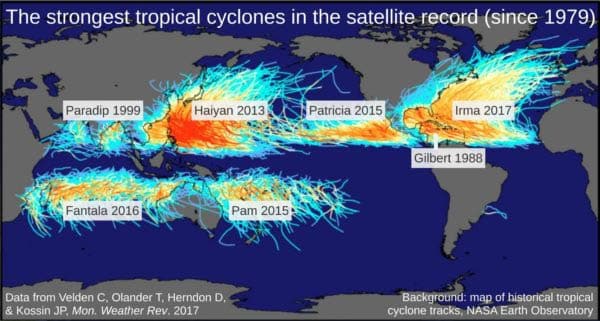 Fig. 1 The strongest storms for the major storm regions Western and Eastern North Pacific, North Indian, South Indian and South Pacific, Caribbean/Gulf of Mexico and open North Atlantic. Of these seven regions, five had the strongest storm on record in the past five years, which would be extremely unlikely just by chance. Irma was added by personal communication from Chris Velden, and a tie of two storms with equally strong winds in the South Indian was resolved by selecting the storm with the lower central pressure (Fantala). (Graph by Stefan Rahmstorf, Creative Commons License CC BY-SA 3.0.)

Other recent records are worth mentioning. Sandy (2012) was the largest hurricane ever observed in the Atlantic. Harvey (2017) dumped more rain than any hurricane in the United States. Ophelia (2017) formed further northeast than any other Category 3 Atlantic hurricane – fortunately it turned north before striking Portugal, against initial predictions, and then weakened over cool waters before it hit Ireland. September 2017 broke the record for cumulative hurricane energy in the Atlantic. Irma (2017) sustained wind speeds of 300 km/h longer than any storm on record (for 37 hours – the previous record was 24 hours by Haiyan in 2013). Cyclone Pam in March 2015 was  already beaten again by Winston in February 2016 according to the Southwest Pacific Enhanced Archive for Tropical Cyclones (though not in Velden’s data analysis). Donna in 2017 was the strongest May cyclone ever observed in the Southern Hemisphere. All coincidence?

One of us (Emanuel) performed an analysis of linear trends in historical tropical cyclone data from 1980 to 2016. These include some observations by aircraft, ships, buoys, and stations on land in addition to the satellite data, but these have not been treated for inhomogeneities. 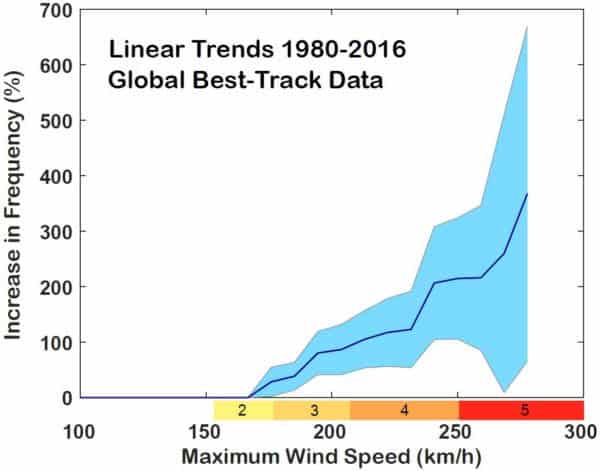 Fig. 2 Percentage increase 1980 to 2016 (as a linear trend) in the number of tropical storms worldwide depending on their strength. Only 95% significant trends are shown. The strongest storms are also increasing the most. Red colors show the hurricane category on the Saffir-Simpson scale. (Graph by Kerry Emanuel, MIT.)

A significant global increase (95% significance level) can be found in all storms with maximum wind speeds from 175 km/h. Storms of 200 km/h and more have doubled in number, and those of 250 km/h and more have tripled. Although some of the trend may be owing to improved observation techniques, this provides some evidence that a global increase in the most intense tropical storms due to global warming is not just predicted by models but already happening.

However, global warming does not only increase the wind speed or frequency of strong storms (which is actually two ways of looking at the same phenomenon, as frequency depends on wind speed).  The average location where the storms are reaching their peak intensity is also slowly migrating poleward (Kossin et al. 2014) and the area where storms occur expands (Benestad 2009, Lucas et al. 2014), which changes patterns of storm risk and increases risk in regions that are historically less threatened by these storms (Kossin et al. 2016).

Most damage caused by tropical storms is not directly caused by the wind, but by water: rain from above, storm surge from the sea. Harvey brought the largest amounts of rain in US history – the probability of such a rain event has increased several times over  recent decades due to global warming (Emanuel 2017; Risser and Wehner, 2017; van Oldenborgh et al., 2017). Not least due to global warming, sea levels are rising at an accelerating rate and storm surges are becoming more dangerous. A recent study (Garner et al. 2017), for example, shows that the return period of a certain storm surge height in New York City will be reduced from 25 years today to 5 years within the next three decades. Therefore, storm surge barriers are the subject of intensive discussion in New York (Rahmstorf 2017).

While there may not yet be a “smoking gun” – a single piece of evidence that removes all doubt – the weight of the evidence suggests that the thirty-year-old prediction of more intense and wetter tropical cyclones is coming to pass. This is a risk that we can no longer afford to ignore.