Marx saw the rift between people and nature not only as a primary failing of capitalism, but also as a mechanism through which capitalism may be superseded. 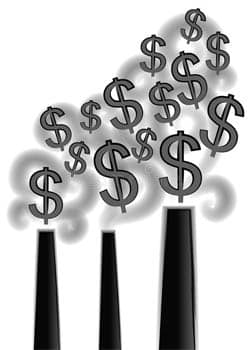 Marx saw the rift between people and nature not only as a primary failing of capitalism, but also as a mechanism through which capitalism may be superseded.

Ben Stahnke is a Ph.D. student and fellow in the Department of Environmental Studies at Antioch University, where he is conducting research on the intersection of political philosophy, environmental policy-making, and ecology.

“It is singular that all of the political economists of England have overlooked the fact that man is a mere borrower from the earth, and that when he does not pay his debts, she does as do all other creditors, that is, she expels him from his holding.”[1]

It is not trope, nor is it particularly controversial, to assert that global environmental change and climate change are among the most pressing issues for the earth and its biotic communities. Climate change — inclusive of its present anthropogenic drivers — is, by no small stretch, not only the most important environmental issue facing human communities to date, it is overwhelmingly accepted as fact by international ecological, geological, and climatological experts. The primary anthropogenic drivers of such change, according to the Intergovernmental Panel on Climate Change, are demographic, economic, sociopolitical, and technological in nature. Such drivers can only be intimately connected to the ways in which extant societies produce and reproduce their material existences.

As the climate continues to warm — a warming which now may be measured during the span of a single human lifetime[2] — ideas regarding the degree to which human impact has affected natural climate variability have become increasingly politicized. When environmental regulations have the ability to both impact and curtail human industrial activities, and where industrial activities — under the capitalist mode of production — largely control political policymaking processes through extensive lobbying, regressive politicking, and the appointment of partisan industry heads into regulatory positions, the hope for effective policies diminishes to a hopelessness.

Under capitalism, and especially in the United States, business enjoys a “special relationship with government.”[3] And, according to Yale political scientist Charles Lindblom: “government officials know this. They know that widespread failure of business … will bring down the government. … Consequently, government policy makers show constant concern about business performance.”[4] As such, under U.S. capitalism, ad hoc regulations not only fall sway to the back-and-forth of the two-party structure; regulation remains, ultimately, subservient to business itself.

If one presidential administration can simply retract and withdraw the environmental protections set in place by prior administrations, the policymaking processes of U.S. federalism as such appear in a futile and circular — if not regressive — light. Lacking a central vision, and without the effective extra-partisan regulatory mechanisms in place to enact progressive, long-term, and sustainable environmental protections, U.S. capitalism as a mode of production thus sets itself against the earth.

However, capitalist production, as Karl Marx observed in Capital, also “creates the material conditions for a new and higher synthesis, a union of agriculture and industry on the basis of the forms that have developed during the period of their antagonistic isolation.”[5] In other words, capitalism, for its failings, is not only an historical, social, and evolutionary improvement upon the feudal-manorial socio-economy which it replaced, it also contains within itself — as a mode of production — the seeds of a future, socialized mode of production; waiting only for an historical actualization. As Antonio Gramsci noted, “it contains in itself the principle through which [it] can be superseded.”[6]

The failings, as well as the dangers, of the present mode of production lie bound up not only within its endemic social exploitation, nor within its environmental exploitation; but within the rift which has occurred between human society and the earth at large. Well known for his insightful work on Marx’s theory of the metabolic rift, political scientist and sociologist John Bellamy Foster observed that:

“Marx employed the concept of a ‘rift’ in the metabolic relation between human beings and the earth to capture the material estrangement of human beings within capitalist society from the natural conditions which formed the basis for their existence — what he called ‘the everlasting nature-imposed condition[s] of human existence.’”[7]

Such a rift in the relationship between the human species and the earth has not only led to a capitalist mode of production which — following directly on the heels of the plundering of the Americas and of Africa by European imperial powers — continues to destroy ecosystems and human populations in the quest for profit; it continues to drive regressive environmental policymaking in ways which only act to reproduce extant social relationships of production and power, as well as the economic means of production and distribution.

Following the waves of Inclosure and Commons Acts which dispossessed peoples from common lands towards the coasts and towards increasingly populated city centers, and driven by changing economic and social pressures, capitalist production has, as Marx observed, done two things:

On a finite world, with essentially finite material resources, and in light of a productive mode predicated upon a logic of profit and growth at all costs, Marx saw the rift in the metabolism between human organism and land — as well as the endemic alienation from the productive activities entailed by mankind’s species nature upon the earth — as not only a primary failing of the capitalist productive mode, but also the mechanism through which capitalism may be superseded.

Such a rift, for Marx, was not biologically nor economically sustainable and as such would lead to its own demise, as well as to its transcendence — towards a new ecological and economic sustainability. Such a sustainability was, for Marx, possible only through a socialization of polity, policymaking, and governance. On this, Marx noted that:

“Freedom, in this sphere, can consist only in this, that socialized man, the associated producers, govern the human metabolism with nature in a rational way, bringing it under their collective control instead of being dominated by it as a blind power; accomplishing it with the least expenditure of energy and in conditions most worthy and appropriate for their human nature.”[10]

Such a socialized governance not only entails materially oriented policies and political structures, but also necessitates an ideological structure focused upon such goals as ecological sustainability, human harmony with the Earth System, and a deconstruction of the logic of profit which presently guides human political interest.

That the earth itself is “a single system within which the biosphere is an active, essential component”[11] should be a primary focus for political and environmental policymaking. The variegated and numerous communities of the earth’s species interact via biotic, abiotic, chemical, physical, and climatological factors within and with the biosphere and, as such, operate metabolically with the earth itself, where metabolism — in both the Aristotelian and the contemporary sense — denotes both change and a circulation of matter. For Karl Marx, the metabolic interdependence and interconnectivity of the human organism and the earth was, as noted in Capital:

“a process between man and nature, a process by which man, through his own actions, mediates, regulates, and controls the metabolism between himself and nature … Through this movement he acts upon external nature and changes it, and in this way he simultaneously changes his own nature.”[12]

Such a metabolism — the circulation of matter for the production and reproduction of human species-existence — was, for Marx, not an abstract idea but one which was grounded in a material conception of the identity between organism and environment. For example, “The German word ‘Stoffwechsel,’” Foster noted, “directly sets out in its elements the notion of ‘material exchange’ that underlies the notion of structured processes of biological growth and decay captured in the term ‘metabolism.’”[13] Such a conception, for Marx, was implicitly dialectical: a “unity and struggle of opposites.”[14]

The striving towards a positive-dialectical and sustainable metabolism between the human species and the earth was thus, for Marx, a central focus of the entire theory of political communism — a theory which “differs from all previous movements in that it overturns the basis of all earlier relations of production … [and which] turns existing conditions into conditions of unity.”[15]

Such conditions are inherently communitarian, for only a community-oriented humanity can collectively respond to the dangers and impacts of a rapidly changing world; guided, as they are, by direct, lived knowledge of community needs and requirements. Effective policy creation thus requires community involvement; further, it requires not only socialized command and control (CAC) regulation guided by a singular vision of sustainability, but a dialectic of CAC thus unified with (and struggling for) bottom-up community input.

A changing world evolves not in the presence of a static humanity; rather, a changing world both impacts and modifies its inhabitor-species. The Holocene Extinction, presently underway, evidences that in light of a changing world, species either adapt progressively or perish en masse. With regard to environmental policy, political inquiry, and socialized governance, theorists and policymakers should turn their attention towards the articulation of policy built upon a conception of the world which is radically different from the present, capitalist conception of the world as both separated and static; a world which, for the capitalist, exists as naught but a collection of resources exploitable for the profit of a dominant class.

However, policy makers and political theorists cannot make progress through a changing of ideas and conceptions alone; such change must coexist with a radical political-economic restructuring:

“by the action of individuals in again subjecting these material powers to themselves and abolishing the division of labour. This is not possible without the community. Only in community with others has each individual the means of cultivating his gifts in all directions; only in the community, therefore, is personal freedom possible.”[16]

Policy makers and political theorists inside of the U.S. should seek to look towards extra-national polities who successfully deal, and who have dealt, with rapid changes in climate; polities who have successfully utilized CAC to confront climate change, such as China and Cuba. In the midst of not only a rapidly changing world, but a world with a great extinction underway, national rivalries and ideological patriotisms in the political-environmental fields only work to undo and to thwart progress.

We must — as philosophers, scientists, and researchers of politics, economics, and policy — work towards a greater goal; indeed, no less than the greatest goal — the adaptation and progressive response to a world undergoing quick change, so that we might secure a sustainable existence for the children of humanity for as long as the earth will have us.

[14] Eftichios Bitsakis, “Complementarity: Dialectics or Formal Logic,” in Nature, Society, and Thought: A Journal of Dialectical and Historical Materialism, (Minneapolis: University of Minneapolis, 2002), 276.