Alan Roberts died on December 12. This appreciation of his life was published in the Australian newspaper The Age. The author is convener of the New South Wales Greens. 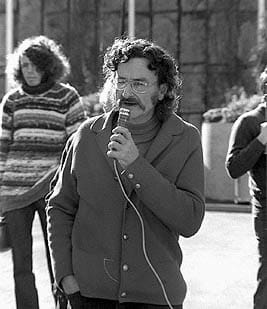 Theoretical physicist, Marxist and dog lover Alan Roberts has as good as claim as anyone to being remembered as Australia’s first ecologist. While teaching physics at Monash University in the 1970s, Alan produced a series of provocative ecological essays, most with a social framework.

In the following decades, he became an international authority on the mathematical modelling of ecological dilemmas and their possible solutions.

Alan was born into a single-parent family in Brisbane on April 2, 1925. His father had died of his war wounds two months before Alan was born. With his mother and his older sister, Alan survived the Great Depression on the meagre war widow’s pension. Despite his brilliance at school, he left at 15 to work in factories.

At 19, in the final year of the Second World War, he joined the air force. It was a turning point, although not in the usual way. In the library on the troop ship bound for Borneo he found and read George Bernard Shaw’s The Intelligent Woman’s Guide to Socialism, and disembarked a convert to socialism.

Back in Australia after the war, he joined the Communist Party and was a “good comrade” until the Soviet repression of the Hungarian uprising turned him into a dissident. The party expelled him in 1958, charging him with being a “Trotskyite factionalist” (his faction numbered three, he later admitted, one of whom was a spy for the local politburo).

After the war he  also took advantage of the Commonwealth government’s offer of free university places for returned servicemen. Alan had always been interested in science, initially in the form of writing science fiction. In the 1940s he had dozens of sci-fi short stories printed in newspapers and pulp magazines.

He flourished at university, earning a masters in physics in 1955 at Sydney. The flamboyant American-born head of the science faculty there, Professor Harry Messel, promptly offered him a job. However, it was the height of the Cold War and Messel soon received a visit from ASIO, who advised him to cancel the job offer. As Alan told it, Messel showed the agents the door. No one was going to tell this academic boss whom he could and could not employ.

Alan, like many of his scientific colleagues, was soon campaigning against the Bomb. He was one of the founders of the Campaign for Nuclear Disarmament in Australia and, an articulate and well-informed speaker, spoke frequently from a ban-the-bomb platform in Sydney’s Domain.

In the 1950s and ’60s most of his colleagues combined their opposition to nuclear weapons with support for nuclear power – the so-called “peaceful atom.” Nuclear power advocates promised electricity so cheap it would not be worth metering. For Alan this was verging on techno-utopian boosterism. For the next 50 years he wrote scores of articles and made dozens of speeches exposing the dangerous pretensions of nuclear power.

In 1966 he left the University of Sydney for Monash, where he taught until retirement in 1992.

Monash in the 1960s was a centre of militant Maoism but Alan was having none of it. He visited Peking in 1966 in the first year of the Cultural Revolution and wrote a report characterising the turbulence as a violent power play by Mao and his allies.

By now Alan was beginning to develop an interest in the new environmental writing coming out of the US from authors such as Murray Bookchin, Rachel Carson, Barry Commoner, Theodore Roszak and Paul Erhlich.

In a decade roughly spanning the 1970s, Alan wrote a series of articles developing an original view of the sources of the unfolding ecological crisis. These essays were collected in The Self-managing Environment, published in London in 1979.

While his approach was basically Marxist, there was nothing orthodox about it. He cited Hegel and Marcuse as often as Marx.The essays ranged from refuting the idea that technological fixes can solve our ecological problems to discussing the anti-ecological nature of the nuclear family. The collection also included an outstanding analysis of the meaning of the “green bans” imposed by the legendary NSW Builders Labourers’ Federation.

What strikes the reader from the opening page is that Alan was not just a deep thinker but also an entertaining writer. Here is his opening salvo against those who blamed over-population for ecological crises:

“The breathtaking arrogance of this analysis deserves some admiration; it is no petty task its disciples undertook, trying to persuade their readers that the main thing wrong with the world was the existence of the readers themselves.

Its central theme, however, was serious: he argued that to concentrate on production as the source of our ecological ills, as many Marxists do, was too one-sided. Yes, capitalist production was concerned with profit regardless of environmental costs, but the other end of the equation was the consumer mindset. The system could only survive if people were prepared to go on buying more stuff, and it seemed they were, even if that meant they had to keep working long hours.

Alan saw that addiction to consumerism as a response to the alienation and powerlessness people felt, in the workplace and beyond. It acted as a powerful compensation. The remedy, he argued, lay in genuine democracy at work and in all social activity.

It wasn’t just talk for Alan. He himself was a living, breathing anti-consumerist. His kitchen furniture consisted of rescued office chairs on castors and a pre-retro laminex table. His wardrobe was a few well-worn items from a previous decade, in utilitarian shades of navy and brown.

If we all hanker after the style of another decade, Alan’s was the 1940s, even if his final car was a 1970s Corolla. Part of his anti-materialism was the abstemiousness of a Depression kid, and part was the absent-minded professor, who was given to eccentric habits such as drinking  pints of cream straight.

While he lived the life of the mind, he was not at all boringly high-minded. Far from it. He was witty and a good mimic. He could recite, line by line, scenes from classic 1930s movies and sing all the best songs from Gilbert and Sullivan operettas. He would work these into his lectures and was immensely popular with students.

He never had children but he took pleasure in the company of a series of intelligent women over his long life, and in later years  the companionship of his various dogs, whose genius and wisdom he would discourse on unbidden and at length. He was also a committed tennis player well into his 80s.

Alan’s reliable good humour was challenged in the last year of his life by failing eyesight and losing the ability to read,  increasing deafness and the onset of severe  pulmonary disease. He had smoked from age 12 till he was 85.

Even when his last days were racked by severe coughing fits, he could joke about its relationship to cigarette smoking. “Who knew?” he would ask straight-faced. He  died on December 12.

Alan is survived by a niece, Tina McKenna, his constant companion and best friend for 50 years Sophie Bibrowska, and – he would insist on this – his dog Billy. A memorial meeting will be held on February 3.