Eight years after the great recession supposedly ended, global inequality continues to deepen, exposing claims that “wealth trickles down” and “a rising tide raises all boats” as class-based lies. 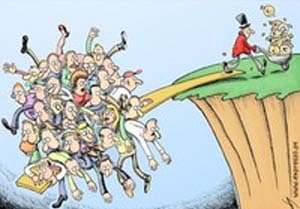 Eight years after the great recession supposedly ended, global inequality continues to deepen, exposing claims that “wealth trickles down” and “a rising tide raises all boats” as class-based lies.

New reports show that deep class divides exist not only between rich and poor countries, but within the richest countries.

A recent report from the Institute of Policy Studies shows that three men — Microsoft co-founder Bill Gates, Amazon founder Jeff Bezos, and Berkshire Hathaway CEO Warren Buffett — are together wealthier than the 160 million poorest people in the United States, half of the country’s population. Twenty-five U.S. billionaires own more than 178 million Americans.

The new edition of the Global Wealth Report, produced annually by global banking giant Credit Suisse, says that “In the past 12 months, total global wealth grew by 6.4 percent. It is the fastest pace of wealth creation since 2012 and one of the best results since the financial crisis.” But the growth is not being shared: the super-rich — one percent of the global population — now own 50% of the world’s wealth. In the bank’s words, “global wealth inequality has certainly been high and rising” since the great recession.

And a report published today by the Organisation for Economic Co-operation and Development (OECD) goes beyond monetary measures to show deep “well-being divisions” within the 35 richest countries.

The How’s Life? 2017 report shows that the richest societies are divided by education:

And by income and wealth:

And by place of birth:

The OECD says only 38 percent of people say they have confidence in their government, a drop of four percentage points since around 2006.  Only one in three people feel they have an influence over what their government does.

I’m reminded of a passage in Michael Yates’s excellent book  The Great Inequality, “Under our current political economic system, none of our major problems can be solved. Insecurity, inequality, and environmental destruction will get worse unless we take radical actions, repeatedly, for as long as necessary. … Other slogans will supplement ‘We are the 99 percent,’ but I hope that the idea that ‘We are the many, they are the few’ remains foremost in our minds as we combat our class enemies.”