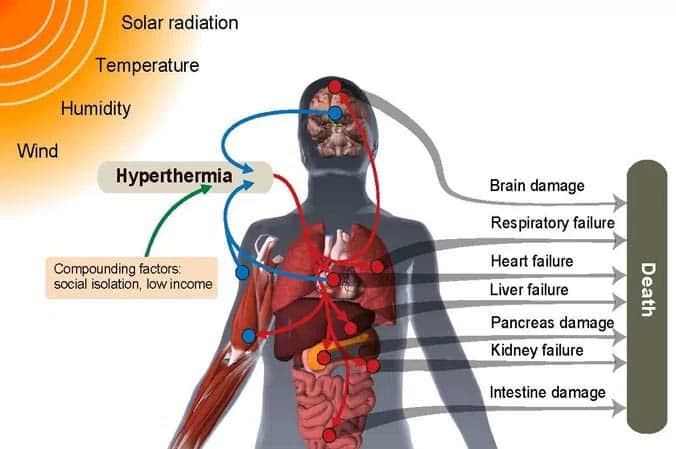 A new systematic synthesis by researchers at the University of Hawai’i at Manoa shows that there are at least 27 different physiological pathways in which a heatwave can kill a human being, and everyone is at risk.

Around the world, numerous cases have revealed the considerable dangers of extreme heatwaves. More than 70,000 people perished to the extreme heat of the 2003 European heatwave, more than 10,000 people to the 2010 Russian heatwave, and more than 2,000 to the 2015 India heatwave. Altogether more than 800 cases of deadly heatwaves have been documented worldwide since 1980.

At times, the impacts of deadly heat are not measured in human lives, but in the numbers of people imprisoned indoors. In the last two years, millions of Americans have been told to stay indoors in cool places to avoid dangerous heat outdoors. Unfortunately, according to recent studies these deadly heatwaves are projected to worsen even with aggressive mitigation of greenhouse gases.

The significance of this deadly heat will depend on the sensitivity of the human body to heat, and a new synthesis paper in the American Heart Association journal Circulation: Cardiovascular Quality and Outcomes shows that we are more sensitive to heat than people may think.

“We know of many case examples when people have died as a result of heatwaves,” says Camilo Mora, associate professor of geography in the College of Social Sciences at UH Manoa and lead author of the study. “However, why people died is a question whose answer is scattered.”

Researchers carried out a systematic review of medical literature into the known ways in which heat kills people. They identified five physiological mechanisms with impacts on seven vital organs. Out of 35 possible interactions (i.e., five mechanisms times seven vital organs), the authors found medical evidence for 27 of such interactions. Basically, there are at least 27 ways in which things can go wrong during a heatwave.

“Dying during a heatwave is like a terror movie with 27 bad endings to choose from,” says Mora. “It is remarkable that humanity overall is taking such a complacency on the threats that ongoing climate change is posing.”

The paper further suggests that all heat damaging mechanisms can be triggered any time heat conditions are experienced, suggesting that anyone is at risk, with much greater risk for people with physical deficiencies or who cannot afford life saving tools, such as air conditioning.

In the paper, the authors comment that in the last decade, there has been a more than 2,300 percent increase in the loss of human life from heatwaves as a result of approximately less than 1°C warming. With 27 ways to die from extreme heat, the death toll that occurred with less than 1°C of warming emphasizes the heightened risk to human life even under the optimistic target of allowing the planet to warm up by another 1°C.

“Clearly, reducing the dangers of a warming world will require us to outperform even our most optimistic projections of climate change mitigation yet,” the authors conclude.

“We are running out of choices for the future,” said Camilo Mora, associate professor of geography in the College of Social Sciences at the University of Hawai’i at Mānoa and lead author of the study. “For heatwaves, our options are now between bad or terrible. Many people around the world are already paying the ultimate price of heatwaves, and while models suggest that this is likely to continue, it could be much worse if emissions are not considerably reduced. The human body can only function within a narrow range of core body temperatures around 37°C. Heatwaves pose a considerable risk to human life because hot weather, aggravated with high humidity, can raise body temperature, leading to life threatening conditions.”

A team of researchers led by Mora conducted an extensive review of over 30,000 relevant publications and found more than 1,900 cases of locations worldwide where high ambient temperatures have killed people since 1980. From those cases, dates were obtained for 783 lethal heatwaves in 164 cities across 36 countries, with most cases recorded in developed countries at mid-latitudes. Some of the cities that have experienced lethal heatwaves included New York, Washington, Los Angeles, Chicago, Toronto, London, Beijing, Tokyo, Sydney and São Paulo.

Threshold for deadly temperatures and humidities

By analyzing the climatic conditions of these lethal heat episodes, researchers identified a threshold beyond which temperatures and humidities become deadly. The area of the planet where such a threshold is crossed for 20 or more days per year has been increasing, and is projected to grow even with dramatic cuts in greenhouse gas emissions. Currently, about 30 percent of the world’s human population is exposed to such deadly conditions each year.

Number of days in a year by 2100 when climatic conditions will exceed the deadly threshold. (a) strong mitigation and (b) business-as-usual scenarios.

“Finding a threshold beyond which climatic conditions turn deadly is scientifically important yet frightening,” said Farrah Powell, a UH Mānoa graduate student and one of the co-authors in the study. “This threshold now allows us to identify conditions that are harmful to people. And because it is based on documented cases of real people across the globe, it makes it that more credible and relevant. The scary thing is how common those deadly conditions are already.”

By 2100 New York is projected to have around 50 days with temperatures and humidities exceeding the threshold in which people have previously died. That same year, the number of deadly days for Sydney will be 20, 30 for Los Angeles, and the entire summer for Orlando and Houston.

The study also found that the greatest risk to human life from deadly heat was projected for tropical areas. This is because the tropics are hot and humid year round, whereas for higher latitudes the risk of deadly heat is restricted to summer.

“Warming at the poles has been one of the iconic climatic changes associated with the ongoing emissions of greenhouse gases,” said co-author Iain Caldwell, a post-doctoral researcher at UH Mānoa. “Our study shows, however, that it is warming in the tropics what will pose the greatest risk to people from deadly heat events. With high temperatures and humidities, it takes very little warming for conditions to turn deadly in the tropics.”

“Climate change has put humanity on a path that will become increasingly dangerous and difficult to reverse if greenhouse gas emissions are not taken much more seriously,” says Mora. “Actions like the withdrawal from the Paris agreement is a step in the wrong direction that will inevitably delay fixing a problem for which there is simply no time to waste.”