Fred Magdoff reviews a new book in which Australian activists explain what’s wrong with corporate profit-centred agriculture and propose a manifesto for a people-centred alternative. 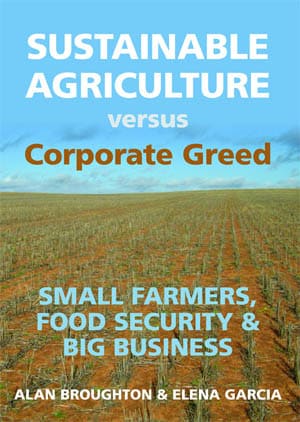 Many people in the wealthy industrialized countries are aware that there is much wrong with the development of large scale agriculture systems dominating their farming scene, but they may not be able to explain the variety and depth of the problems nor their source. This type of agriculture, in which single crops or a small number of crops are grown over vast acreages, is expanding from the north to huge areas of South America, especially in Brazil and Paraguay, and the raising of farm animals under crowded and cruel conditions is also spreading from the United States to other countries.

Sustainable Agriculture vs. Corporate Greed dissects the problems that farmers face, some of the social and ecological issues associated with large scale farming (including the takeover of land from small and medium scale farms), the various organizations resisting these trends, and possible alternatives. While the authors are Australian and many of the examples they use are from that country, much of what is discussed applies to other countries and there is some attention to other parts of the world and the global scene as a whole.

The short book (just under 90 pages) is in two parts. The first, by Alan Broughton, is an overall discussion of the economic and social issues of contemporary agriculture mainly in the industrial countries. The difficulties that farmers face have been clear for some time, with a declining proportion of what people spend on food going to farmers. With the exception of short periods of time when raw commodity prices are high (usually resulting from somewhat tight supplies and financial speculation in the commodities markets), low prices force farmers to reduce costs as much as possible and for many the end of the story is selling out to large scale operations that have both physical economies of scale as well as financial economies of scale, allowing them to continue operating.

Hard times (low farm commodity prices), and new technologies encourage ever larger farms, as described in a recent Wall Street Journal article headlined “Supersized Family Farms Are Gobbling Up American Agriculture.” (October 24, 2017) The article, featuring a 30,000 acre (12,000 hectare) farm in Kansas, points out that “three-quarters of America’s farmed cropland is controlled by 12% of farms” and that 4 percent of U.S. farms (those with sales of $1 million or more) produce “two-thirds of the country’s agriculture output.” This has caused a major restructuring of farming, resulting in massive losses of farms. Because owners of a large farm (and their workers) spend less money locally than many small farmers once did, the economies of small rural communities decline.

The many problems associated with contract farming and poor working conditions of farm workers are discussed. Broughton also puts the prevalence of global hunger and malnutrition in perspective. He makes it clear that these are not the result of too many people or too little food, but rather the insufficient purchasing power of the poor and speculators driving up prices when food stocks are tight. The supposed benefits of “free trade” agreements and deregulation are debunked and their detrimental environmental and social costs examined.

The supposed greater efficiency of large farms is shown to be only true of labor efficiency. Large farms almost always produce more crops and animals per worker, as machinery and chemical inputs substitute for labor, as happens with mechanization of industrial production.

However, large farms do not have an advantage in terms of production of crops per unit area (hectare or acre). Small farms, using multi- cropping, good rotations, and other agroecological techniques can actually produce more food per hectare than large farms. With so many small farmers still producing about half of all food, helping them use agroecological techniques is an important task, keeping people from migrating to urban areas (where there are frequently no jobs) and creating more vibrant communities.

While millions of people have left farming, those many small farms that remain (especially in Africa, Asia, and Latin America) have organized to resist the land grabs and low prices of products coming from large farms in their countries or imported as a result of “free trade” deals. The largest farmer organization is the 200 million strong La Vía Campesina, organized in 73 countries. There are movements to obtain land for the landless, such as the Brazilian MST (Movimento dos Trabalhadores Rurais Sem Terra), and there are movements in the industrialized countries to promote and protect small farm interests.

In the second part of the book, two essays by Elena Garcia focus on ecological and social issues involving farming in Australia. There is some repetition in the first two essays—over the important question of how much animal agriculture, especially ruminants such as cattle, contribute to global warming. Garcia explains that while such animals do naturally emit the greenhouse gas methane, better diets and animal breeding may lessen this substantially.

She also points out that a large proportion of Australia’s CO2 emissions are caused by wildfires, some 30 percent, but if intensive grazing management is practiced, much less dry biomass remains to provide fuel for these fires. Garcia provides an interesting perspective on the contribution of animal agriculture to pollution, but this contentious and complex issue deserves a much more detailed discussion.

Garcia delves into a very important issue, one that exists in many other countries as well, the “urban-rural disconnect” that has land use, environmental, and political implications. Garcia also describes the ongoing crisis of Australian dairy farms (which is also happening in the United States).

Although I agree with much of what is written in Sustainable Agriculture versus Corporate Greed, there are some parts I take issue with, especially Garcia’s claim that farmers are environmentalists, almost by definition (see page 75). Some certainly are, but many are using practices that cause substantial harm to soil, biodiversity, water quality, and food safety. Mostly they are just not aware of the damage or they feel that they can’t afford the cost of farming in more environmentally sound ways.

The book ends with a manifesto for sustainable agriculture in Australia. The suggestions in the manifesto are good ideas, worthy of putting forward. Of necessity, they go against the interests of corporate farms and agrifood corporations in general, and the capitalist class as a whole. Withdraw from the WTO, mandate fair pay for agricultural labor, build alternate supermarkets, focus government support on small farms instead of large farms, ban agribusiness (and mining operations) that pollute water, reform how animals are raised, and so on.

Many of these go against the very logic and power relations of capitalist economies. This becomes crystal clear with the very last suggestion of the manifesto— “Full human rights for rural people, including rights to food, water, employment, housing, education, health care, communication, rest and culture.” A very different economic-political-social system will be needed to make this a reality. The book would have been more useful if it discussed the barriers to change that are inherent to capitalist economies along with all the very important criticisms made of the unsustainable corporate agricultural system.

Fred Magdoff is Professor Emeritus of Plant and Soil Science at the University of Vermont. He is co-author of Creating an Ecological Society: Toward a Revolutionary Transformation (Monthly Review Press, 2017)