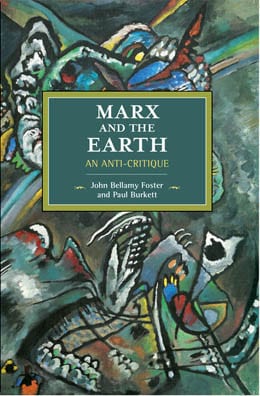 MARX AND THE EARTH: AN ANTI-CRITIQUE
by Paul Burkett and John Bellamy Foster
Haymarket Books, 2017

A long-standing critique of the writings of Marx and Engels has been their supposed lack of concern for or even analysis of the environmental damage caused by capitalism. Worse, even as they envisaged and fought for a world of human freedom, their conception of socialism showed a comprehensive disregard for how humans interact, or should interact, with nature.

Marx has been viewed as Promethean: as soon as the proletariat had taken over the factories and dispensed with the bosses, its job would be simply to build more factories, in ever-expanding spheres of production. Given that the regimes claiming the mantle of Marx in the twentieth century took exactly that pathway, and that many self-described Marxists seeking to defend Stalinist states were disdainful of an environmental ethic or responsibility, it’s not hard to understand why this charge gained such credence.

However, that position has become wholly untenable first and foremost thanks to two decades of scholarship by John Bellamy Foster and Paul Burkett. Both have forcefully demonstrated that Marx and Engels were profoundly ecological thinkers who embedded our relationship to nature deep within their critique of capitalism. As shown by Foster and Burkett, Marx and Engels believed that to be truly free, humanity not only needed to overcome the alienation of labor but simultaneously our alienation from nature, both bestowed on us by capitalism.

In one sense, Foster and Burkett’s unearthing of the extensive concern with natural limits and ecological issues within the writings of Marx and Engels should hardly be surprising. As assiduous materialists, how could they possibly have neglected the material surroundings that our species exist within and that human labor power works upon to live, produce, and reproduce? Marx and Engels go far beyond a mere utilitarian conception of nature and ascribe an appreciation of nature as a primary axis of human fulfillment and, furthermore, it is the duty of a socialist society to look after the air, water, and soil for the benefit of future generations of humans and other species. Marx’s tremendously important concept of the “metabolic rift” furnishes us with the analytical tools to understand why capitalism is inherently anti-ecological—and thereby anti-human—and furthermore, how a socialist society must operate to repair those rifts and overcome human alienation from nature.

Building on their previous work, Foster and Burkett have published Marx and the Earth as an anti-critique in the spirit of Frederick Engels and Rosa Luxemburg. Moving on from a thorough demonstration of the ecological sensibilities of Marx and Engels (and many other early Marxists) established in their previous writings, Foster and Burkett seek to extend and deepen their analysis by addressing six more recent ecological critiques arising from a range of left-wing environmental theorists and writers. They make the case that ecosocialist thought has gone through its own period of evolution.

A serious engagement with environmental questions by Marxists first began to reemerge in response to the movements of the 1960s and 70s, what Foster and Burkett term “first stage ecosocialism”: it was influenced by Marx but also highly critical of Marxism; in many cases these theorists wanted to distance themselves from Marx’s writings. Later developments in ecosocialist thought, the “second stage ecosocialism” (or ecological Marxism), of which Foster, Burkett, and a range of other thinkers took part, began in the 1990s, and sought to flesh out a more comprehensive Marxist analysis of nature. In many ways in contradiction to first-stage ecosocialism, these Marxists brought about a synthesis of red and green ideas. Beginning with a reexamination of the writings of Marx himself, they effectively combated the idea, developed more forcefully in the 1980s, that Marxism and environmentalism where incompatible and in opposition to one another.

Since demonstrating how deeply Marx and Engels wove ecology into their conception and application of historical materialism, more dialectical critiques have arisen of classical historical materialism around specific questions related to Marx and Engels’s supposed lack of consideration of thermodynamics, failure to differentiate between sources of energy (fossil fuels vs. renewables), dismissal of the analysis of Sergei Podolinsky who attempted to formulate a labor theory of value connected to energetics, and their supposedly anthropocentric and utilitarian perspective on nature.

It is this further deepening of historical materialist analysis and methodology with regard to environmental questions and against these more concentrated ecological critiques of Marx from a range of leftwing writers that Foster and Burkett engage in their anti-critique. As the authors note of the book’s purpose, “The systematic nature of this anti-critique will serve, we hope, to bring out both the enormous dialectical power of Marx’s theory and its historically specific character.” Foster and Burkett are careful to note that the point is not to be “primarily scholastic,” but to develop “an ecological materialism organically connected to historical materialism itself. The goal is to bring this to bear on revolutionary praxis.”

A long introduction deals with two of the more recent criticisms of Marx’s ecological method made by Belgian Marxist Daniel Tanuro regarding renewable versus nonrenewable energy, and accusations of anthropocentrism made by Donald Worster and Joel Kovel. As Foster and Burkett definitively show, Marx and Engels did differentiate between forms of energy (coal versus wood and water) and evinced strong acknowledgement of the importance of other species and an appreciation of the non-human world that went far beyond how directly useful it could be to humans. As the authors note, there is something of a false dichotomy between an anthropocentric versus ecocentric outlook:

“Human consciousness, human capacities, and human needs are irrevocably human-based, and in that sense inescapably anthropocentric. But there is a great deal of difference between an anthropocentrism that promotes clear-cuts for purposes of unconstrained economic expansion, and one that attempts to sustain old-growth-forest ecosystems for the sake of the species within.”

Human beings clearly have the capacity for both but it is equally clear from Marx’s writings that he considered the latter to be what human nature must strive for.

The following five chapters examine to what extent Marx and Engels neglected or even rejected the first and second laws of thermodynamics (the law of conservation of energy and the law of entropy), whether they were too dismissive of Podolinsky’s work on the law of value, and whether they saw the economy as a closed, linear system, in contradistinction to writers in the field of ecological economics such as Herman Daly, Juan Martinez-Alier, Daniel Bensaïd, and others.

Through an extremely detailed and thorough analysis of Marx and Engels’s writings and those of their critics, Foster and Burkett vindicate the pair’s deep engagement with technologies and scientific concepts that were only beginning to fully emerge toward the end of Marx’s life. Marx and Engels were insightful and appreciative commentators on forms of energy and fully engaged with the complexities and controversies surrounding the new field of thermodynamics. They integrated energetic and ecological considerations into the methodology of historical materialism without falling into the trap of energy reductionism.

The picture that emerges from this book illustrates just how widely read the founders of historical materialism were with respect to the cutting-edge scientific discoveries of their time and how amazingly contemporary in their ecological thinking, particularly due to Marx’s concept of the metabolic rift, which prefigures modern systems ecology. Their book lays the groundwork for a “third stage” development of ecosocialism that builds on Marx’s methodological approach to open-systems thermodynamics and the intrinsic and aesthetic value of nature from a human perspective.

Marx and the Earth thus offers a fascinating portrait of Marx and Engels’s thinking on ecological Marxism, successfully refutes the criticism made by recent ecosocialist detractors, and represents a significant development in ecosocialist thought in its own right. As such it should be read by everyone interested in gaining a better understanding of the historical materialist approach to nature that Foster and Burkett so artfully and comprehensively show began with Marx.

This review was first published in International Socialist Review, Summer 2017