Scientists find irreversible changes that have no precedent in the 4.54 billion years of Earth history, caused by new human-made materials 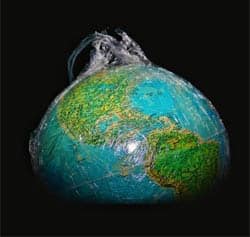 Scientists find irreversible changes that have no precedent in the 4.54 billion years of Earth history, caused by new human-made materials

‘Omnipresent’ signs demonstrating the effects of human impact on England’s landscape have been revealed by researchers from the University of Leicester.

Concrete structures forming a new, human-made rock type; ash particles in the landscape; and plastic debris are just a few of the new materials irreversibly changing England’s landscape and providing evidence of the effects of the Anthropocene, the research suggests.

The research, which is published in the journal Proceedings of the Geologists’ Association, has been conducted by geologists Jan Zalasiewicz, Colin Waters, Mark Williams and Ian Wilkinson at the University of Leicester, working together with zoologist David Aldridge at Cambridge University, as part of a major review of the geological history of England organised by the Geologists’ Association.

Professor Jan Zalasiewicz, from the University of Leicester’s Department of Geology, said:

“We are realizing that the Anthropocene is a phenomenon on a massive scale – it is the transformation of our planet by human impact, in ways that have no precedent in the 4.54 billion years of Earth history. Our paper explores how these changes appear when seen locally, on a more modest scale, amid the familiar landscapes of England.”

Professor Mark Williams, from the University of Leicester’s Department of Geology, said:

“These changes taken together are now virtually omnipresent as the mark of the English Anthropocene. They are only a small part of the Anthropocene changes that have taken place globally. But, to see them on one’s own doorstep brings home the sheer scale of these planetary changes – and the realization that geological change does not recognize national boundaries.”

The Anthropocene – the concept that humans have so transformed geological processes at the Earth’s surface that we are living in a new epoch – was formulated by Nobel Laureate Paul Crutzen in 2000.

The research suggests that some of the changes surround us in the most obvious and visible way, though we rarely think of them as geology. Examples include the concrete structures of our cities, which have almost all been built since the Second World War, and are just one small part of steep rise in the global prominence of this new, human-made rock type.

Other changes need a microscope to see, such as fly ash particles that have sprinkled over the landscape – a fossil signal of the smoke that belched out during industrialization – or the skeletons of tiny algae in ponds and lakes across England, the types of which dramatically changed as the waters then acidified too.

Larger future fossils include the shells of highly successful biological invaders such as the zebra mussel and Asian clam, which now dominate large parts of the Thames and other river systems.

There are subterranean rock changes too, as coal mines, metro systems and boreholes have riddled the subsurface with holes and caverns.

The research also shows how the chemistry of soils and sediments has been marked by an influx of lead, copper and cadmium pollution – and by plastic debris, pesticide residues and radioactive plutonium.

This article is based on a news release from the University of Leicester. The paper, “The stratigraphical signature of the Anthropocene in England and its wider context,” is published in the journal Proceedings of the Geologists’ Association. Unfortunately it is behind a paywall.