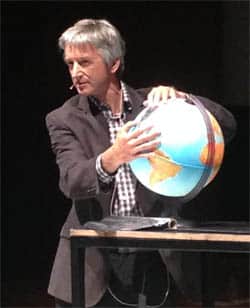 Last year, the Anthropocene Working Group voted overwhelmingly (34 votes to 1) that a “geologically real” new global epoch began in the second half of the twentieth century. As Colin Waters of the British Geological Survey told the International Geological Congress in August:

“Changes to the Earth System that characterize the potential Anthropocene Epoch include marked acceleration to rates of erosion and sedimentation, large-scale chemical perturbations to the cycles of carbon, nitrogen, phosphorus and other elements, the inception of significant change to global climate and sea level, and biotic changes such as unprecedented levels of species invasions across the Earth.  Many of these changes are geologically long-lasting, and some are effectively irreversible.”

The AWG has now moved on, as they reported to the International Geological Congress in August, to considering which of many “signals” in the rock record should be used as a formal geological indicator of the beginning of the Anthropocene.

But not all scientists have been convinced that a new epoch should be formally added to the Geological Time Scale. In the past few years the idea that the Earth System has entered a qualitatively new stage has been criticized from a variety of viewpoints. It’s been argued that Anthropocene is a misleading term of non-stratigraphic origin and usage, is based on insignificant temporal and material stratigraphic content unlike that used to define older geological time units, is focused on observation of human history or speculation about the future rather than geologically significant events, and is driven more by politics than science.

In a new paper published in Newsletters on Stratigraphy, the AWG formally replies to some 21 arguments against formalizing the Anthropocene, made in scientific papers published in the past five years. While they are consistently respectful, the 27 AWG authors do not accept any of the criticisms. As principal author and AWG chair Jan Zalasiewicz says, whatever one might think about the political and social implications of the new epoch, there is no doubt that it is a physical reality.

“Our research suggests changes to the Earth have resulted in strata that are distinctive and rich in geological detail through including such things as artificial radionuclides, plastics, fly ash, metals such as aluminium, pesticides and concrete. And, while the term does reflect change of significance to human society, and may be used in social and political discussions, it is based upon an independent reality.”

Perhaps the most trivial criticism of the Anthropocene is the argument that there is something wrong with the word itself. Replying to complaints about the word’s “dubious etymology,” the authors agree that Anthropocene — a spur-of-the-moment improvisation by Paul Crutzen in 2000 — is “not a carefully constructed neologism.” But, they point out, the names of many well-established geological time units could face similar criticism: “for instance, to have the Silurian and Ordovician named after obscure ancient Welsh tribes has no apparent inherent logic from a stratigraphic perspective.” It may not be a perfect name, but Anthropocene is now “is widely used and generally understood in wider discourse” so changing it now would just cause confusion in scientific and non-scientific circles. “It would make little sense to rename it into something envisaged to be of greater etymological purity – even if such a name could be composed and widely agreed.”

I find the AWG’s responses on this and the other more substantive issues entirely convincing, but, as AWG member Mark Williams says, the discussion is not over.

“These responses do not mean that the Anthropocene will be instantly formalized. There is still much work to do to gather the evidence for a formal proposal based upon a ‘golden spike’ — a physical reference point in strata, somewhere in the world, to define the beginning of this proposed new epoch. And, the benefits of formalizing the Anthropocene, both for geologists and for wider communities, still need to be demonstrated in detail. But, these comprehensive responses show that the Anthropocene cannot be dismissed as a scientific fad.”

The new AWG paper is essential reading for anyone interested the state of the Earth System, so happily it is not behind one of those academic paywalls that so inhibit open discussion. Download the PDF here: Making the case for a formal Anthropocene Epoch: an analysis of ongoing critiques.

PS: While I was writing this, Jeremy Davies, author of The Birth of the Anthropocene, posted his comments on the new paper on his blog, Made Ground. As always, his views are interesting and insightful.