In the Introduction to his new book, Ian Angus says ecosocialism must be based on a careful and deliberate synthesis of Marxist social science and Earth System science — a twenty-first century rebirth of scientific socialism. 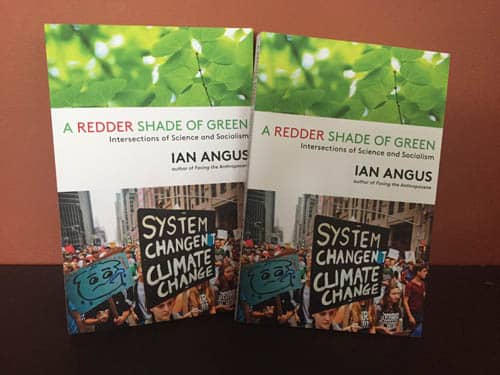 This is the Introduction to A Redder Shade of Green, published this month by Monthly Review Press. It can be purchased directly from the publisher, or from most online booksellers.

ESSENTIAL DEBATES AT THE
INTERSECTIONS OF SCIENCE AND SOCIALISM

“One basis for life and another for science is a priori a lie.”
—Karl Marx—

Red and green together are the colors of ecosocialism, a body of ideas and a movement whose fundamental principle is that there can be no true ecological revolution that is not socialist, and no true socialist revolution that is not ecological. Ecosocialism aims to build red-green movements based on a social-ecological understanding of the global crisis, to inform and advance radical movements for social and ecological justice. A Redder Shade of Green is a contribution to that effort.

The essays, interviews, and talks collected here discuss some of the intersections of socialism and science that define ecosocialist politics in the twenty-first century. They cover a variety of topics, united by the conviction that ecosocialism cannot succeed unless it is more than a pious wish for a better world: it must be based on a concrete scientific understanding of how our world has evolved, how it is changing today, and where those changes may take us. The way we build socialism, and the kind of socialism that can be built, will be profoundly shaped by the state of the planet we must build it on. If our political analysis and program doesn’t have a firm basis in the natural sciences, our efforts to change the world will be in vain.

The reverse is also true, because the natural sciences only reveal parts of reality. Chemistry and climatology show us that greenhouse gases are rapidly disrupting climate patterns that have existed longer than human beings have walked the earth, and they identify fossil fuel combustion as the primary source of those gases. But by themselves they cannot show why the most powerful governments and corporations have actively resisted any serious action to reduce emissions, nor can they show us how to overcome that resistance. An understanding of Earth System science is necessary for preventing environmental crises, but it is not sufficient.

For Karl Marx and Frederick Engels, socialism had to be based on Wissenschaft — a word that is usually translated as science, but which has a broader meaning in German: the systematic pursuit of all kinds of knowledge. Marx and Engels used the term “scientific socialism” not to suggest that it was comparable to chemistry or physics, but as a contrast to the utopian socialisms of the early nineteenth century, which were based on abstract moralism, not on systematic study of capitalism and its material context. For them, there was no wall between social and natural science.

Unfortunately, most of what passes for social science in universities today has abandoned any thought of a unified understanding of human society and the rest of the natural world. Even within environmental sociology, where the best scholars retain that objective, there are many who view human society as somehow exempt from the laws that govern the rest of the Earth System.

In contrast, ecosocialism seeks and is based on a careful and deliberate synthesis of Marxist social science and Earth System science — a twenty-first century rebirth, if you will, of scientific socialism.

A Redder Shade of Green is a book of debates, polemics, and arguments, because although environmentalists, scientists, and socialists share concerns about the devastation of our planet, we frequently differ on explanations and solutions. We disagree not just with defenders of the status quo, but with one another, and that’s healthy. In movements for change, unanimity is more often a sign of lack of thought than genuine agreement. We can only reach real consensus through frank and open debate, and by testing our ideas in actual campaigns to stop environmental destruction.

We don’t argue for argument’s sake: these are essential debates, part of the process of developing the theory, program, and practice of socialism in the twenty-first century.

One book cannot possibly address all the contentious issues that face ecosocialists today, so I have selected topics that have been of particular interest to readers of the web journal I edit, Climate & Capitalism. For clarity I have grouped these topics under five headings.

The articles on which the chapters in  A Redder Shade of Green are based were originally published between 2009 and 2017. All have been edited for clarity and consistency and to minimize repetition. Some are virtually unchanged, others have been extensively revised and updated. Each stands alone, but the arguments will be clearer if you read the chapters within each section in order.

Nothing here should be viewed as ecosocialist gospel or even as my final judgment on any of these subjects. These are contributions to critical debates that I fully expect to continue. I look forward to receiving responses, criticisms, and disagreements, as submissions to the online journal Climate & Capitalism and, more informally, on our Facebook page. I reserve the right to reply — and the right to change my mind in response to convincing arguments.