There is much to admire in Naomi Klein’s new book, but she underestimates the danger posed by Trumpism, and doesn’t pose a real alternative. She calls for a Leap, but it isn’t high enough or far enough. 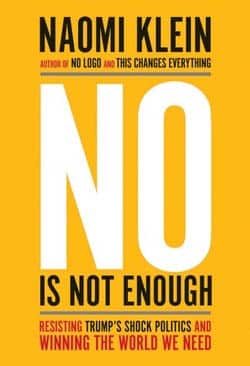 There is much to admire in Naomi Klein’s new book, but she underestimates the danger posed by Trumpism, and doesn’t pose a real alternative. She calls for a Leap, but it isn’t high enough or far enough.

John Bellamy Foster is editor of Monthly Review and a professor of sociology at the University of Oregon. This review first appeared on MRonline with the title What is to constitute the new ‘yes’ is the problem. It is reposted here with permission.

NO IS NOT ENOUGH
Resisting Trump’s Shock Politics and Winning the World We Need
by Naomi Klein
Haymarket Books, 2017

A new book by Naomi Klein, one of the leading left journalists and critics in North America, and the author of such important treatises as No Logo, The Shock Doctrine, and This Changes Everything is not something one wants to miss, especially when it is on the 2016 election and the rise of Donald Trump. This book, though, written over a few months rather than years, is meant to play a different role than her major treatises. No Is Not Enough is a conversational book aimed at a liberal audience perplexed by the whole Trump phenomenon and wanting to know what to do. Klein’s answer is to resist, but to resist with a purpose.

No Is Not Enough is an attempt to view Trumpism through the triple framework provided by her earlier books, focusing on branding, neoliberalism, and the critique of climate change. This approach works best with respect to branding: the subject of No Logo. Klein unveils the nature of the Trump brand, its origins, and significance, the effect of his ghost-written bestseller The Art of the Deal, his role as a Reality Show star, and how Trump saw the presidency as the ultimate extension of his brand. He even dreamed that he would be the first person to run for president and make money on it. Klein’s succinct depiction of Trump the brand, reminds one of Michael Rogin’s 1987 book, Ronald Reagan: The Movie.

But there are limits to explaining Trump and the Trump family as a brand, because while it reveals important things about the Trump phenomenon, it does not provide much understanding of Trumpism as a political movement. And it is this which has constituted a jolt to establishment politics. Klein might have analyzed the White House role of Steve Bannon and those surrounding Breitbart, but at the time she wrote her book it was being emphasized by the mainstream media that Bannon and the alt-right were out and Jared Kushner, Trump’s son-in-law and a consummate FIRE (finance, insurance, and real estate) capitalist was in. This led Klein to downplay the role of neo-fascism in the White House (represented by figures like Bannon, Attorney General Jeff Sessions, Labor Department appointee Curtis Ellis, and numerous others) and the very different politics that this represented. Instead, Klein presents Trump as a representative of neoliberal shock politics, which she defines as “extreme capitalism.”

Seeing Trump as an extreme, and more dangerous, neoliberal does not take us very far in the analysis of Trumpism. But the limited nature of the criticism seems to be intentional on Klein’s part because she is trying to reconnect to a broader liberal audience. She remarks that her open support of Bernie Sanders in the election cost her a number of friends. While she does not back away altogether from her support of Sanders, she claims that criticisms of him for being weak on race and gender were “legitimate”—and even that he would have won in the primaries against Hillary Clinton if he had been better in these areas. In this respect, her chapter on “Learn to Love Economic Populism” is the most interesting and contradiction-laden in her book.

For Klein, resisting Trump, or developing a meaningful anti-shock politics, then, is some combination of what Sanders represented and what Clinton symbolized: Sanders with respect to class and economics, Clinton as far as race and gender, and everything else. (Imperialism and war scarcely enter the argument.) Trump himself is seen not as someone who in any sense won the election; rather the Democrats lost it. Her analysis in this respect is firmly pinned to the task of creating a new progressive, electoral majority, with a more coherent left message—and one in line with Canada’s “Leap Manifesto,” which takes its cue from Indigenous resistance. Her most moving chapter is the one on the struggle at Standing Rock, North Dakota, and the alliances that it created.

What is missing, however, is any sense that Trump represents a different kind of politics that is here to stay, something more dangerous than mere neoliberalism. To be sure, Klein warns in her chapter “The Toxic To-Do List” that any external shock like a terrorist attack would undoubtedly be seized by Trump to remove civil liberties and create a much more repressive state. But the relation of Trump to the whole question of the state and liberal democracy, and indeed to the radical right or neofascism is largely absent. The main issue posed by this book remains one of opposing neoliberalism (and by implication restoring liberalism in the sense of affirmative government). Trump represents a heightening of what she calls “racial capitalism,” which, like neoliberalism itself, is a form of extreme capitalism. But in many ways, according to Klein, Trump does not constitute a fundamentally new challenge, the product of a more crisis-ridden capitalism, just a more extreme version of neoliberalism. It is all one shock doctrine.

The most radical parts of Klein’s book, which point to the need for rapid, large-scale change—a leap into the future—are those focused on climate change. Klein says that climate change “isn’t more important” than the other issues posed by the left. It is simply bigger, the stakes are higher, and the time in which to act is less—admissions that might lead one to in fact say that it is strategically more important. Here she rejects Trump’s “ecocidal capitalism” as an extreme form, without failing to criticize the inadequate and contradictory climate policy under Obama.

The biggest shortcoming in Klein’s book—albeit one that presents itself to all utopian projects—is represented by its title. Naturally one would expect a book entitled No Is Not Enough: Resisting Trump’s Shock Politics and Winning the World We Need to present a concrete, alternative politics. But here Klein struggles to create a new Democratic Party politics. In a section called “Remember When We Leapt,” referring to the 1930s and the 1960s, she mentions Karl Marx, W.E.B. Du Bois, Martin Luther King, the New Deal, Bernie Sanders, and Upton Sinclair. But nowhere is the issue of socialism raised.

The penultimate chapter of the book is “A Time to Leap” that tells the story of Klein’s role and that of others in the development of the Canadian “Leap Manifesto,” which attempted to provide a kind of peoples’ platform, including Indigenous peoples, labor unions, environmentalists, civil rights activists, women’s organizations, etc. As Klein emphasizes, this was an exercise in intersectional politics, trying to bring the various popular interests together, with Indigenous and environmental values at the center: a kind of popular, town-hall politics. The result is a platform that opposes austerity and promotes the rights of peoples and the environment. Again and again, Klein says “Let’s leap” rather than take small steps. The “corporate coup” that Trump represents needs to be confronted with a “reverse shock.” The most powerful words, she says, are reparations and redistribution. Society should learn to value things other than “growth.”

There is much to admire here, as in all of Klein’s work. But No Is Not Enough is distinct from her other books in that it is less about movement politics and actual grass roots resistance than it is in developing a new progressive Democratic Party politics. For this reason, the Leap she envisions is not high and far enough. It stops short of directly challenging capitalism itself or advocating a socialism for the twenty-first century. It is true that No Is Not Enough. But a new Yes, needs to be offer much more.