In addition to his major contributions to the theory and practice of organic chemistry, the Red Chemist authored the first history of the subject, a book written from the standpoint of historical materialism. 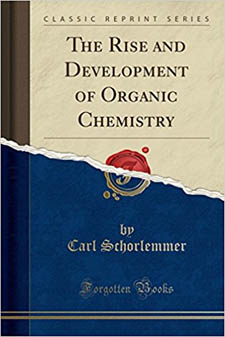 My articles on Carl Schorlemmer, Marx and Engels and the Red Chemist, and More on the Red Chemist, have attracted considerable interest, but they certainly weren’t the last word on the subject. Several C&C readers have drawn my attention to other sources of information on this chemist and communist.

I was particularly pleased to learn, from UK-based ecosocialist Philip Ward, that historian Colin A. Russell (1928 – 2013), as part of his Presidential Address to the British Society for the History of Science, discussed some aspects of Schorlemmer’s work. The talk, titled “Rude and Disgraceful Beginnings: A View of History of Chemistry from the Nineteenth Century,” was published in the British Journal of the History of Science in September 1988. These excerpts provide further insight into Schorlemmer’s career and ideas:

“In 1879 the first history of organic chemistry appeared, written by the first incumbent of a British chair in that subject, Carl Schorlemmer, of Owens College, Manchester. It was he who first clarified the nature of the alkane series of hydrocarbons [paraffins]. His predecessor, Edward Frankland, had incorrectly inferred two different species with (for instance) the formula C2H6; Schorlemmer’s end to the confusion removed a great hindrance to the development of organic chemical theory in the 1860s.

“A friend of Engels and Marx, he belonged to the German Social-Democratic Party, and that would have precluded tenure of any chair in Germany in the later years of the century. His book The Rise and Development of Organic Chemistry was translated into German and appeared as a second English edition in 1894. An unpublished manuscript history of chemistry as a whole was discovered after his death. …

“Schorlemmer’s history of chemistry was deeply indebted to [Hermann] Kopp, as he gladly admitted, but he went far beyond his teacher in developing a history of science based on Marxism. Indeed his recent biographer, Karl Heinig, asserts that here was the beginning of Marxist historiography of science. Thoroughly disenchanted with the empiricist legacy of Naturphilosophie, Schorlemmer adopted the standpoint of dialectical materialism, concerning himself with ‘the basic laws of scientific development, the context in which the individual sciences relate to one another, theoretical questions about the role of hypotheses and theories, and the connection between Theory and Praxis’.

“He held a dynamic view of chemical change, holding that even for molecules ‘everything is in an eternal flux’ as Heraclitus had said. He was fortunate in finding organic chemistry just then embracing dynamic concepts (as in tautomerism) and therefore ideal for his exegesis. And the Hegelian notion of quality emerging from quantity was able to account for the incremental effect of successive CH2 additions in building up homologous series, an argument later used by Engels. In 1892 Engels wrote a highly appreciative obituary notice for him.

“Schorlemmer’s history of organic chemistry is undoubtedly a major achievement, and it does highlight the importance of conceptual analysis in history as in science. Yet if it be compared with its predecessors—even with Thomson half a century earlier—its methodology does not seem to be so very different. Nor, in fact, does it have much to say about economic or political factors. What it does accomplish is the establishment of a historiography that takes into account the dynamic processes and distinctive features of the new organic chemistry. And it was a means to an end. For Schorlemmer the history of science was an unconditional necessity for understanding science itself’.”