Carl Shorlemmer’s contributions to chemistry were described in this biographical note, published 99 years ago. And there is a statue of him in Germany.

Recently, in Marx and Engels and the Red Chemist, I discussed the important role that the eminent chemist Carl Schorlemmer played in the development of Marx and Engels’ understanding of the natural sciences.

Yesterday, I came across a biographical note, published in 1918 in A History of Chemistry, by F.J. Moore, a professor of organic chemistry at the Massachusetts Institute of Technology. In addition to providing further detail on Schorlemmer’s contributions to chemistry, it shows the esteem in which he was held by other scientists. It also shows that he did not conceal his political views from his colleagues.

“Carl Schorlemmer (1834-1892) was born in Darmstadt, Germany. In 1853 he went to work as an apothecary and as such moved to Heidelberg. Here he came under the influence of Bunsen, so that he gave up pharmacy and went to Giessen to study chemistry under Will and Kopp. In 1859 he went to England as assistant to Roscoe, and in 1874 he was made professor of organic chemistry at Manchester which was the first chair of its kind in England. He worked on the aliphatic hydrocarbons and showed that what had been assumed to be “free methyl” was the same as ethyl hydride, which we now call ethane. He discovered a general method for converting a secondary into a primary alcohol and studied the boiling points of the paraffins[1] and the constitution of aurin and suberone.

“He published Chemistry of Common Life in 1874[2] and Rise and Development of Organic Chemistry in 1875. In 1877 the Treatise on Chemistry, which he wrote with his colleague at Manchester, Sir Henry Enfield Roscoe (1833-1915), appeared in German, and the next year in English. This was the outstanding English treatise on chemistry for about fifty years. Schorlemmer was interested in social democracy and was a friend of Karl Marx. Throughout his life he sought to improve the lot of the workingman.”

Notes by IA: [1] The word “paraffins,” as used here, refers not to wax, but to derivatives of petroleum, such as kerosene and gasoline. [2] The reference to a book titled Chemistry of Common Life seems to be an error; the book Schorlemmer published in 1874 was A Manual of Chemistry of the Carbon Compounds; or, Organic Chemistry.

In 1954 a Carl Schorlemmer Technical University (Technische Hochschule Carl Schorlemmer) was founded in Merseburg, near Leipzig, in the German Democratic Republic. The university was dissolved in 1992, but this larger-than-life statue of Schorlemmer, erected in 1972, still stands on the site. 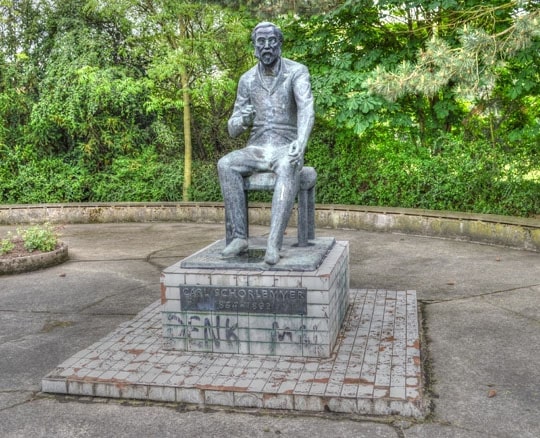