Walter Rodney’s classic study led to a veritable revolution in the teaching of African history. It remains one of the most compelling and persuasive books to emerge from the bowels of critical resistance to the exploitation of small countries. 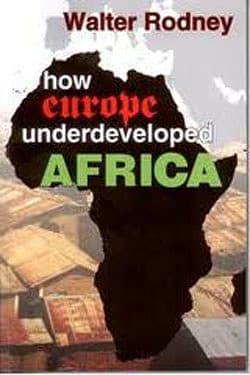 This year marks the 40th anniversary of the publication of Walter Rodney’s How Europe Underdeveloped Africa. Every now and then in history a scholarly enterprise emerges that breaks new ground and provokes an impact that exceeds the confines of narrow academia. Walter Rodney’s seminal work in combination with his other projects performed precisely this function for Africa and beyond.

Its publication and reception exemplified the strains and fissures in the scholarship focused on the continent at the time. It would go on to become one of the most influential books in the “Third World.”

When it emerged in 1972 the book was hailed in Dar-es-Salaam as “probably the greatest book event in Africa since Frantz Fanon.” Wole Soyinka, the African novelist went further. He suggested that Rodney was one of the first “solidly ideologically situated intellectuals ever to look colonialism and exploitation in the eye and where necessary, spit in it.”

The book’s publication led to a veritable revolution in the teaching of African history in the universities and schools in Africa, the Caribbean and North America. Its content became contagious and was an element in the developing world historical sociology stream in embryo in the USA in the 1970s – more specifically the “world systems analysis’ framework. Rodney’s doctoral thesis – A History of the Upper Guinea Coast, had earlier set the parameters and standard for this later decisive intervention in African historiography.

Rodney compiled How Europe Underdeveloped Africa from extensive archival research systematically identifying causes and outcome of the historical turbulence on the African continent. In doing so he identified the world capitalist system, both mercantile and modern, as the principal agency of underdevelopment of the African continent for over five centuries. The book covers a wide range: an introductory discussion on the concepts “development and underdevelopment;” the state of Africa prior to European entry; Africa’s contribution to capitalist development; the effects of colonial education and impact of missionary activity; the collective nature of African organisation; and of course the exploitation of African resources during the colonial era and consequent “underdevelopment.”

According to Rodney, Europeans went through several phases of desire in Africa: first it was gold, through ivory and camwood to human cargo (slavery). He sketches the slow conquest and penetration due to shipping superiority and the slow breakup of African kingdoms and states in the 16th-17th century leading to the Portuguese slave trade and decision-making role for Europeans in Africa. While dissecting the slave trade he drew parallels between the rise of the European seaport towns of Bristol, Liverpool, Nantes, Seville and the Atlantic slave trade.

In a passage that vividly explains the impact of Europe on Africa and its subsequent underdevelopment Rodney asserted that:

“the European slave trade was a direct block, in removing millions of youth and young adults who are the human agents from whom inventiveness springs. Those who remained in areas badly hit by slave capturing were preoccupied about their freedom rather than with improvements in production.”

Rodney pursues the notion that colonisation gave Europe a technological edge and addresses the exploitation of African minerals important for making steel alloys, manganese and chrome, including columbite – critical for aircraft engines. Significantly, in the course of this orbit of exploitation there was incessant African resistance. But European firearms, after reaching a certain phase of effectiveness, as in the use of the Maxim (machine gun) against the Maji Maji and the Zulus and others, in concert with the use of Africans in colonial armies tipped the military balance in favour of Europe and subjugated a continent.

Unilever, Firestone and the exploitation of a continent

Throughout the text Rodney provides compelling evidence of European greed, naming traders and businessmen whose titles would later became associated with global conglomerates. David and Alexander Barclay were 18th century slave traders who Rodney said were “engaging in the slave trade… and who later used the loot to set up Barclays bank.” Today Barclays is one of the most powerful banks in the world yet its website sanitizes its past role with little or no acknowledgement that its founding profits stemmed from the African slave trade.

Contemporary corporate culture with its beneficent public relations outlook took generations to perfect. As Rodney eloquently describes, there was a point in time when colonialists and settlers held nothing back in their language of domination. Colonel Grogan, a white settler in Kenya, bluntly said of the Kikuyu: “We have stolen his land. Now we must steal his limbs. Compulsory labour is the corollary of our occupation of the country.”

Rodney also attacks the notion, which unfortunately still persists, that there is some universal nexus or equal relationship between “hard work” and great wealth, a myth peddled in the West today. In his tome Rodney swats away this “common myth within capitalist thought that the individual through hard work can become a capitalist.”

In like vein Rodney connects America to the exploitation of Africa, especially with the links between the Firestone company and Liberian rubber. According to Rodney, “between 1940 and 1965 Firestone took 160 million dollars worth of rubber out of Liberia; while in return the Liberian government received 8 million dollars.”

He traces the evolution of companies like Unilever as major beneficiaries of the exploitation of the African continent. Beginning with soap, William Lever began to produce Lifebuoy, Lux and Vim and margarine. A merger in 1929-30 resulted in Unilever taking its current title and expanding with the material coming from products such as copra, groundnut oil, palm oil, and oils and the fats of animals. Today Unilever is one of the biggest corporations in the world now responsible for everyday indispensable brand name products such as Dove, Closeup toothpaste, Lipton’s tea, Q tips, Vaseline, Cutex, Slimfast, Klondike, Ben & Jerry’s ice cream, Ponds, Sunlight, Breeze, and Vim of old.

Even as How Europe Underdeveloped Africa struck a chord among many academics, students and general readership on several continents it has been subjected to several critiques over time. It is certainly evident that the text is short on gender analyses and the role of women – only a few pages bear on women in Africa and the context of their exploitation and resistance.

One critic suggested that despite its pretensions to be Marxist analysis the text actually fails on that count. This critique explains that How Europe Underdeveloped Africa “fails because it tries to persuade an African audience of the relevance of dependence theory by making it mesh with the simplistic version of the past already popularised by nationalist historians.”

Another critic, Caroline Neade, argues that Rodney identified Africa as “passive victim” of European colonization. But there is a lot in the book which would render this criticism unfair. Rodney quite conspicuously emphasised African technological development at a given point in history prior to European intervention and African resistance to European penetration is given vigorous treatment and agency in the text.

Other scholars generally sympathetic with Rodney nonetheless find fault with some of his other arguments. Lansine Kaba for example, whilst hailing the importance of the work for African scholarship, is critical of the “sweeping generalization” and placement of Sudanic kingdoms as feudal states and Rodney’s description of traditional African economies as subsistence economies. Similarly, others have decried Rodney’s 1972 book as too “polemical.”

Yet Rodney was the non-traditional historian and “polemic” that reached a wider, popular audience was essentially his goal. In his own words Rodney declared that the main purpose of the text was to “try to reach Africans who wish to explore further the nature of their exploitation rather than to satisfy the “standards” set by our oppressors and their spokesmen in the academic world.”

One of the more important themes that distinguished Rodney as an historian with a difference was the issue of “living history” a concept apparent in the methodology of How Europe Underdeveloped Africa. Rodney explains:

“Many historians are afraid to deal with living history and I can understand why, because sometimes it is dangerous, especially in Africa. The moment that the social scientist begins to reflect too closely on the present, he or she is subversive in the Third world. It is safer to be with the mummies and the bones.”

Rodney’s productive and activist zeal for history is well established. Andaiye reflected on his propensity for writing: “He wrote everywhere – in the car if he wasn’t driving, standing on the street corner, on the stelling waiting to board the Berbice ferry, waiting for public meetings to begin in Linden, on the Corentyne, in Leonora, in Buxton, often surrounded by police.” This anecdote gives an indication of the type of historian Rodney was: a living breathing embodiment of the seamless collusion between work and activism, people’s causes and the use of history as clarification and intellectual armour and not restricted to an inert academic excursion.

This makes Rodney one of the main critics of the positivist tradition in historiography. The positivists consider humanities or the natural and social sciences as solely derived from sensory experience. Consequently, the logical and mathematical treatment of any data is seen as exclusive and authentic. Positivism, which prevailed in the humanities, and in the social and natural sciences, remained dominant until historians like Rodney, the feminist movement and oral history advocates among others punctured its limitations and pretensions.

After Rodney’s assassination in 1980 his work continued to grip the imagination of Third World and Pan-African scholarship. Evidence of the book’s lasting value is the fact that at least eight editions have been published over time. Furthermore it is still widely utilised, even with academic challenges to its content, as a critical reference point on the historiography of Africa.

But there is still difficult road ahead as memories are short even in the age of express communication. More and more we are hearing from young people in Guyana, the Caribbean and Africa, who, on being introduced to his life and work typically come up with the refrain: “Who is Rodney?”

Issa Shivji, Professor of Law at Dar University placed this amnesia in context as he reflects on today’s reality. During Rodney’s time, he said, “we swore by wafanya kazi na wakulima (workers and peasants); now we all aspire to become wawekezaji na walaji (investors and consumers). Or more correctly wakala na wawekezaji (investors’ agents or compradors).”

In the final analysis, for the Guyanese historian, writing and activism was a strategic and heartfelt response to the need for history, while maintaining academic rigour, to break with certain conservative traditions. In other words, history was a liberating tool. Like Frantz Fanon’s Wretched of the Earth and Paulo Freire’s Pedagogy of the Oppressed, How Europe Underdeveloped Africa remains one of the most compelling and persuasive books to emerge from the bowels of critical resistance to the exploitation of small countries.

If Rodney were to rewrite How Europe Underdeveloped Africa he would doubtless, given the scholar within, reconfigure sections, tighten certain arguments and perfect the narrative. But his overall thesis would stand. The overt fangs that slave traders and corporate giants like Barclays, Unilever and Firestone openly displayed in early profiteering and exploitation of the continent have been replaced by charming corporate public relations smiles and handouts.

Yet the profits sequestered from Africa over several centuries, as effectively argued by Rodney, still stand as a foremost if not exclusive source and substance of Africa’s underdevelopment. In short, Europe and North America assisted substantially in the rape and underdevelopment of a continent rich in human and natural resources.