The ideologues who try to drive a wedge between Marx and Engels must ignore the simple fact that Marx read and approved of Engels’ most important work. 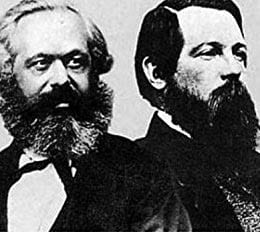 My email continues to deliver interesting responses to my article on Carl Schorlemmer, Marx and Engels and the Red Chemist. Most recently, a reader asked my opinion of  Corruption and Fate of Left-Wing Hegelianism, a ten-year-old journal article in which Norman Levine bizarrely argued not only that Engels was not a Marxist (he was an Engelsian, no less!) but that Schorlemmer was responsible for Engels’ apostasy!

I plan to publish a reply at some point, but to prepare the ground, here’s short passage from the American Marxist scholar Hal Draper.

“One of the chief objectives of the Engels-versus-Marx myth is to detach Engels’ Anti-Duhring from Marx’s seal of approval. This is a great convenience for a number of tendentious views, since Anti-Duhring was the only more or less systematic presentation of Marxism made by either of the two men, and therefore covers much that Marx never got around to treating under his own name. The bigger the vacuum that can be created in the Marx canon, the more easily can the empty spaces be filled in freehand and at will by anyone who cares to spin a fantasy of his own about Marxism.

“It is a nuisance for the fantasists that Anti-Duhring came before Marx’s death, and that their collaboration on the work is well documented, Marx even writing one chapter of the book. I am afraid that the mythologists are unaware that Marx wrote a blanket endorsement of the book for party publication. Even if this record did not exist, it would take an imaginative reconstruction of their relations to suppose that such a work, written under such circumstances, could have been published by Engels in the party press without Marx’s detailed scrutiny.

“By its nature the work was a polemical defense of Marx and the views associated with his name in the first place. It had to be a production of the ‘firm.’ It is a measure of the propensity to concoct nonsense that ambitious essays ‘proving’ that Anti-Duhring is basically anti-Marx can be written without even raising or mentioning (let alone discussing) the plain fact that all this anti-Marxism went by Marx’s anxious inspection without raising a murmur. Obviously, Marx did not understand Marxism either; only the mythologists do.”

That’s from volume one of Draper’s definitive and masterful study of Marx’s political thought, Karl Marx’s Theory of Revolution. In the 40 years since it was published there have been many more contributions to the Engels-versus-Marx myth, but not one of the myth-makers has produced a credible response.