Ian Angus and John Riddell argue that using the Leap Manifesto as the basis for building a new socialist movement in Canada must include confronting the climate crisis and the power of Big Oil.

In the Autumn 2016 issue of Canadian Dimension magazine George Martell argues that “the Leap Manifesto offers a genuine opportunity to move beyond social democracy — to directly face up to capitalism — if we are prepared to take the Manifesto’s demands seriously.”

Martell’s thoughtful essay is followed by responses from activists representing a variety of viewpoints, including the following contribution by John Riddell and Ian Angus.

Ian Angus is editor of Climate & Capitalism and an activist with Sustainable North Grenville. John Riddell, a historian of the socialist movement, is active in Toronto East End Against Line 9 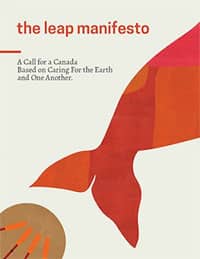 KEY TO THE LEAP: LEAVE THE OIL IN THE SOIL

by Ian Angus and John Riddell

George Martell correctly notes that the Leap Manifesto’s impact on the New Democratic Party has opened new possibilities for the Left. Its “direct opposition to the oppressive logic of global capitalism,” offers us a “genuine opportunity to move beyond social democracy.”

But to seize this opening, the Left must resolve a timescale problem that Martell does not address. His movement-building program is long-term, but the world climate crisis demands immediate action. We believe that the Leap Manifesto can bridge that gap.

The world ecological crisis is now apparent in abrupt climate shifts that are impossible to miss even in capitalist heartlands. As John Bellamy Foster and Brett Clark write, delay is unacceptable.

“What is necessary first and foremost is the cessation of fossil-fuel combustion. We have no choice but to slam on the brakes and come to a dead stop with respect to carbon emissions before we go over the climate cliff.”[1]

The Paris climate agreement called for a 1.5oC ceiling on global warming, but already, just months later, scientists tell us that goal may be impossible to meet, because governments have not acted. As Naomi Klein says, “the governments that made this promise are now pushing for more fracking and more tar sands development,” which is “utterly incompatible” with their stated goal.[2] Nowhere is this more evident than in Canada. The Trudeau government has combined promises for climate action with support for more pipelines and more tar sands mining.

As Naomi Klein wrote in This Changes Everything, capitalist governments will not rein in climate change. “Only mass social movements can save us now.” She recently elaborated on her call for uniting the broadest possible range of grassroots movements

“So long as climate change is just one issue on a checklist, it will always fall off that list, because there’s always issues that are more pressing. And that’s natural. Of course people are more focused on putting food on the table, taking care of their families and healthcare and education.

“The question is: How can we [engage with climate change] in a way that addresses those core bread-and-butter concerns, rather than trying to compete and say, ‘There’s no jobs on a dead planet’ – a slogan you hear a lot in the environmental movement.”[3]

The Leap Manifesto summarizes this approach as “caring for the earth and for one another.” It stresses the urgency of action: “Climate scientists have told us that this is the decade to take decisive action to prevent catastrophic global warming.” The Manifesto’s website, posted on the eve of Canada’s October 2015 federal election, hammers this home: “Small steps are no longer enough. 2016 is our year to leap.”

A turning point on climate action?

In the October election, parties that promised sweeping climate action won 62.6% of votes, showing broad support for change. Since then, the Northern Gateway pipeline project was stopped, and the Kinder Morgan and Energy East projects face fierce opposition.

The riding-by-riding town halls held by the government on climate action have shown the strength of grass-roots forces inspired by the Leap Manifesto.[4] At time of writing, it seems unlikely that the Liberal government can resolve its internal tensions – let alone override popular resistance – by the start of 2017.

It is in that context that we must evaluate the federal NDP’s adoption of the Leap Manifesto as a basis for discussion, over vigorous opposition from the party brass and screams of outrage from conservative politicians and pundits. Some on the left see that outrage as paradoxical – the Leap’s measured and reasonable-sounding demands don’t seem to justify the right-wing hysteria.[5]

First we should bear in mind that the Manifesto –  only 1,400 words long – was negotiated by a wide range of organizations, including major trade unions. Its tone and content reflect that origin. Moreover, proposals such as a national childcare program, immigration status for all workers, and a universal basic annual income aren’t new, or, by themselves, particularly radical.

But the Manifesto also calls for a halt to “building new infrastructure projects that lock us into increased extraction decades into the future.” It specifically demands a stop to building oil and gas pipelines. That clearly goes beyond the limits of acceptable discourse in mainstream Canadian politics. And it points unmistakably to the greatest of heresies: that most of Canada’s oil reserves must be left in the ground.

For Big Oil, support for unlimited fossil fuel extraction is the ultimate litmus test for political legitimacy – and it has forced every major party to go along. The Manifesto’s success at the NDP convention broke with that orthodoxy. The NDP, which the fossil fuel cartel doesn’t like but could tolerate in the big pro-oil tent, appeared to be slipping the leash. In that context, the corporate media’s cries of anguish (“prescription for economic ruin,” “national suicide,” etc.) are not surprising.

The Manifesto’s radicalism is not just a matter of individual demands. It arises from their combination. Effective climate action requires more teaching; conversely the call for more investment in education is urgent given the need for a clean energy economy. All of this in the context of opposition to the policies of one of the strongest sectors of Canadian capitalism.

We agree with Martell’s call for a broad community organizing movement, and we would stress that many such groups already exist. Black Lives Matter, Idle No More, local climate justice and anti-pipeline groups, to name just a few, show that we don’t have to start from scratch.

The response to the Leap Manifesto – both the broad popular acclaim it has received and the hostility it has provoked from defenders of the status quo – show that it can be a strong framework for socialists to engage with such movements, both in fighting for immediate objectives and in building a long-term movement for social change.

[5] See, for example, the June 2016 position paper of Toronto’s Socialist Project, “A Leap Toward Radical Politics?”