Shell admits spilling 260,000 litres of oil in Bodo, Nigeria, in 2008, but independent experts say it was at least 7.8 million litres, and possibly over 49 million. After three years, Shell has not cleaned up the oil or paid compensation. 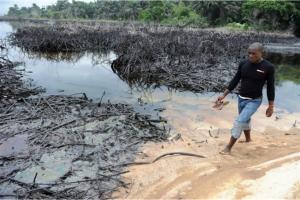 Spilled crude oil in the Niger Delta near Bodo, a village in the Ogoniland region of Nigeria

A major oil spill in the Niger Delta was far worse than Shell previously admitted, according to an independent assessment obtained by Amnesty International and the Centre for Environment, Human Rights and Development (CEHRD), which exposes how the oil giant dramatically under-estimated the quantities involved.

The spill in 2008, caused by a fault in a Shell pipeline, resulted in tens of thousands of barrels of oil polluting the land and creek surrounding Bodo, a Niger Delta town of some 69,000 people.

The previously unpublished assessment, carried out by US firm Accufacts, found that between 1,440 and 4,320 barrels of oil were flooding the Bodo area each day following the leak. The Nigerian regulators have confirmed that the spill lasted for 72 days.

Shell’s official investigation report claims only 1,640 barrels of oil were spilt in total. But based on the independent assessment the total amount of oil spilt over the 72 day period is between 103,000 barrels and 311,000 barrels.

“The difference is staggering: even using the lower end of the Accufacts estimate, the volume of oil spilt at Bodo was more than 60 times the volume Shell has repeatedly claimed leaked.

“Even if we use the start date given by Shell, the volume of oil spilt is far greater than Shell recorded.”

Shell’s oil spill investigation report also claims that the spill started on 5 October 2008 – while the community and Nigerian regulators have confirmed a start date of 28 August 2008.

What is not in dispute is that Shell did not stop the spill until 7 November – four weeks after it claims it began – and 10 weeks after the start date given by the community and the regulator.

Converting the amount into litres, Shell’s figure is just over 260,000 litres, while the lowest estimate based on the Accufacts assessment, and using Shell’s start date, would be 7.8 million litres.

However, using the start date given by the community and regulator and the higher end of the estimate, then it is possible that as much as over 49 million litres of oil spilt at Bodo.

The publication of the independent assessment coincides with a global week of action in which people from across the world are calling on Shell to stop hiding from the devastating impact of its operations in the Niger Delta on people’s lives and the environment.

The serious under-recording at Bodo also has wider implications: Shell repeatedly claims to its investors, customers and the media that the majority of the oil spilt in the Niger Delta is caused by sabotage.

The basis for this claim is the oil spill investigation process, which is deeply flawed and lacks credibility. The cause of spills, the volume of oil spilt, and other important parameters like the start date, are not recorded in any credible way.

Bodo is one example but Amnesty International and CEHRD have also exposed serious failings in other oil spill investigations. Both organisations have repeatedly called for an independent process for investigation of oil spills, and an end to the system that allows oil companies to have such influence over the process.

Shell initially claimed to the media that 85 per cent of oil spilt in the Niger Delta in 2008 was caused by sabotage. The company later admitted that this figure did not include a major oil spill that was subsequently found to be due to operational failures.

Based on the new evidence obtained by Amnesty International and CEHRD about the 2008 Bodo oil spill more than half of the oil spilt in the Niger Delta in 2008 was due to operational failures – and possibly as much as 80 per cent. However, given the serious flaws in the oil spill investigation process, all oil spills would have to be subjected to independent assessment to obtain accurate figures.

“Sabotage is a real and serious problem in the Niger Delta, but Shell misuses the issue as a PR shield and makes claims that simply don’t stand up to scrutiny.”

More than three years after the Bodo oil spill, Shell has yet to conduct a proper clean up or to pay any official compensation to the affected communities. After years of trying to seek justice in Nigeria the people of Bodo have now taken their claim to the UK courts.

“The evidence of Shell’s bad practice in the Niger Delta is mounting. Shell seems more interested in conducting a PR operation than a clean-up operation. The problem is not going away; and sadly neither is the misery for the people of Bodo.”

This week thousands of activists in more than 14 countries – from Japan to Sweden, Senegal to the USA, as well as in Shell’s home countries the Netherlands and the United Kingdom – are taking part in events and protests, including outside Shell’s offices and petrol stations, calling on Shell to clean up its act in the Niger Delta. The week will reach a climax when affected communities stage a peaceful demonstration outside Shell’s offices in Port Harcourt in the Niger Delta.