Ian Angus: “I can’t recall another book that positions the present global crisis in Earth’s deep history so well, in a form that can be readily understood by non-specialists. Every ecosocialist should read it.” 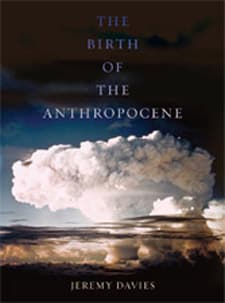 “I can’t recall another book that positions the present global crisis in Earth’s deep history so well, in a form that can be readily understood by non-specialists. Every ecosocialist should read it.”

Ian Angus is editor of Climate & Capitalism and author of Facing the Anthropocene: Fossil Capitalism and the Crisis of the Earth System (Monthly Review Press, 2016)

THE BIRTH OF THE ANTHROPOCENE
by Jeremy Davies
234 pages. University of California Press, 2016.

The next time someone asks why I wrote a book about the Anthropocene, I hope to say something like this.

“This book …[is] as much about the terminal crisis of the Holocene as it is about the birth pangs of the Anthropocene, or rather, I emphasize that those two things are one and the same. The Holocene matters because it is the only geological epoch so far in which there have been symphony orchestras and hypodermic needles, moon landings and gender equality laws, patisseries, microbreweries, and universal suffrage — or, to put it plainly, the agricultural civilizations that eventually made all of those things possible. With its demise, the civilized rights and pleasures previously confined to the Holocene will have to negotiate radically changed ecological conditions if they are to endure, let alone if they are to be extended more generously to more people. That is the political problem of the Anthropocene.”(5)[1]

That’s just one of many passages in The Birth of the Anthropocene that caused me to think, “I wish I had written that!”

Jeremy Davies is a fine writer who explains scientific concepts clearly and concisely. I don’t agree with everything he says, but I heartily recommend his new book to everyone who wants to understand the deep roots of today’s global crisis.

Inevitably, there is some overlap between his account and mine. We both describe Nobel Prize winner Paul Crutzen interrupting another scientist at a conference in 2000: “We’re not in the Holocene anymore. We’re in the Anthropocene!” We both explain why many scientists believe a new epoch in Earth history has begun. Our responses to common criticisms of the Anthropocene concept are expressed differently, but are virtually identical in content.

“The Anthropocene of the geologists is not an anthropocentric concept, nor one that separates humankind from the rest of nature. The name Anthropocene describes the most distinctive aspect of the new epoch, not its single essence. And if the Anthropocene does not put any human beings at the ontological center of the world, then it is certainly not guilty of putting all of them there in a lump. That is, if the new epoch is not a dualistic concept, then the further accusation that it reduces the diverse human populations of the world to an undifferentiated mass, all collectively responsible for current environmental despoliation, also loses its power. The geological Anthropocene is neither universalist nor technocratic, and neither deterministic nor antipolitical.”(76)

I wish I had written that.

Despite such similarities, our books are very different. I share Davies’ hope, expressed in his blog, that readers will find them “complementary and mutually illuminating.”

In Facing the Anthropocene, I focus on how the development of capitalism has disrupted the Earth System, and how that disruption will affect life and society in the 21st century, from a Marxist, ecosocialist point of view. My account of the Anthropocene places particular emphasis on the findings of Earth System science.

For Davies, who espouses no explicit political viewpoint, the key to understanding the Anthropocene is not Earth System science but geology — more precisely, the work of “the stratigraphers, who devote their labors to the precise demarcation and time-tabling of the deposition of rock layers all around the world.”(12) He situates the Anthropocene as a proposed addition to the official Geological Time Scale, as both a break in and a continuation of millions of years of deep history.

“The idea of the Anthropocene,” he writes, “provides both a motive and a means for taking a very, very long view of the environmental crisis. It gives the ecological upheavals of the present day their proper place in the history of the planet.”(2)

Two of his six chapters examine Earth’s deep past. “The Rungs on the Ladder” starts 640 million years ago, when complex life first appeared, and concludes with the Pleistocene ice ages that ended 11,700 years ago. “An Obituary for the Holocene” outlines, in thousand-year increments, the history of humanity and climate after the ice retreated, from the invention of agriculture and the origin of large civilizations, to the “end-Holocene event” that we are now living through.

Those chapters thoroughly explode the myth that the natural world was stable and unchanging until capitalism or industry arrived and humans messed things up. The Anthropocene is a time of dramatic change, but as Davies says, it is “not a fall from Eden.” To prepare for the new epoch, we need to understand just how rapidly and violently the world has changed in the past.

A third chapter, “Geology of the Future,” also deals with deep time, but looks in a different direction. Drawing on Jan Zalasiewicz’s book The Earth After Us, Davies asks: if humanity doesn’t survive the current environmental crisis, what could geologists from another planet learn about us, a hundred million years from now? This thought-experiment — looking back from the distant future — frames an intriguing account of how human activity is changing the planet now, and the long-lasting physical records that activity is creating. This is essentially what the members of the Anthropocene Working Group are considering now, in their discussions of when the Anthropocene began.

“The modern ecological catastrophe,” Davies writes, “is so far-reaching that it cannot really be understood without setting it in the context of geologic time.”(4-5) His illuminating and insightful tour through deep history is the great strength of The Birth of the Anthropocene: I would recommend it for those chapters alone.

As is often the case, however, the great strength of Davies’ book is also a weakness. His relentless focus on geology, on what he calls the stratigraphic Anthropocene, is valuable but narrow. The Anthropocene isn’t just a new geological epoch, it is a crisis of the Earth System, which scientists define as the “interacting physical, chemical, and biological global-scale cycles (often called biogeochemical cycles) and energy fluxes which provide the conditions necessary for life on the planet.” The Earth System includes “human beings, their societies and their activities,”[2] which are not outside influences but integral to entire global complex.

That radical new understanding of our planet, the essential basis of Anthropocene science, was developed in a massive international research effort, coordinated by the International Geosphere-Biosphere Program between 1990 and 2015. In 2009, stratigraphers formally joined the process by forming the Anthropocene Working Group (AWG). The combination of Earth System science and geology has made huge advances in our understanding of the Earth System and  the Anthropocene.

Davies, however, views what he calls “the stratigraphic turn,” not as an extension of Earth System science, but as a break from it — “an immense displacement of the human” because stratigraphy deals not with how humans have changed the planet, but “with the fact of ecological change as such.” (66)

That seems a quixotic goal for a book about an epochal change whose “distinguishing characteristic (for now) is the dramatic influence that human societies are having on the physical world.”(10)

It’s noteworthy that the stratigraphers whose work Davies admires and describes don’t seem to have noticed that “conceptual break.” On the contrary, the AWG includes scientists from both disciplines, and all of its major position papers have been signed by stratigraphers and Earth System scientists — hardly a sign of a break! And it’s difficult to see any sign of an “immense displacement of the human.” A major AWG paper, published early this year, begins:

“Humans are altering the planet, including long-term global geologic processes, at an increasing rate. Any formal recognition of an Anthropocene epoch in the geological time scale hinges on whether humans have changed the Earth system sufficiently to produce a stratigraphic signature in sediments and ice that is distinct from that of the Holocene epoch.”[4]

No one can reasonably describe that as a “conceptual break” from “from human-centred theories of agency.”

What has happened is not a break, but, as the AWG emphasizes, a convergence.

What is to be done?

The “stratigraphy versus Earth System science” theme doesn’t dominate The Birth of the Anthropocene, which does an excellent job of presenting the deep time approach to global change.

But when it comes to the implications of the Anthropocene for contemporary environmental movement politics, an “anti-anthropocentric” approach that minimizes “human-centred theories of agency” provides little guidance. As a result, Davies’ discussion presents not a concrete program, but abstract “possible changes of emphasis,” because “the Anthropocene provides a way of seeing rather than a programmatic agenda.”(202)

But for hundreds of millions of people whose conditions of life are already in peril, a “way of seeing” is grossly insufficient. As a famous philosopher taught us, it’s not enough to interpret the world — the point is to change it.

And indeed, to the extent that he does make concrete proposals, Davies tacitly sets aside the “conceptual break,” arguing that “the earth system concept of biogeochemical cycles,” is scientific justification for campaigns whose goal is “keeping most of that remaining carbon in the ground.” To achieve that, environmentalists must target the profits of fossil fuel companies: “Divestment from fossil fuels is a geological act, an intervention in the linchpin biogeochemical process of the earth system.”(208-9) That’s both true and important — but a purely stratigraphic analysis could not have reached that conclusion.

One of the first socialist pamphlets I ever read (decades ago!) was The Long View of History, a popular account of biological and social evolution from early life to the present, by the U.S. Marxist George Novack. What impressed me was not the specifics of his account, which was already out of date when I read it, but his insistence that we cannot change the world if we don’t know how it got to be this way.

As he expressed it: “The movement based upon scientific socialism, which prepares most energetically for the future, likewise must probe most deeply into the past.”[6]

Jeremy Davies isn’t a Marxist, but George Novack would have appreciated his superb account of how the Anthropocene is connected to hundreds of millions of years of planetary change. I can’t recall another book that positions the present global crisis in Earth’s deep history so well, in a form that can be readily understood by non-specialists. Every ecosocialist should read it.

And whatever disagreements we may have with his approach, his final conclusion is a lesson the entire left must heed:

“Ongoing struggles for environmental justice still have the power to influence what will emerge from the Holocene’s terminal crisis. If the planet is living through the birth of an epoch, then the world’s green movements face the responsibility of helping shape a turning point within the vast reaches of the geological timescale.”(209)

I wish I had written that.

Postscript: While I was writing this article, Jeremy Davies reviewed my book, Facing the Anthropocene, in his blog, Made Ground. I hope to respond to his thoughtful comments in a future article.

[1] Page numbers for quotes from The Birth of the Anthropocene are given in parentheses. Other references are in endnotes.