Another contribution to C&C’s ongoing discussion of Andreas Malm’s masterful new book on the origins and current implications of an economic system whose deep dependence on fossil fuels threatens the survival of civilization. 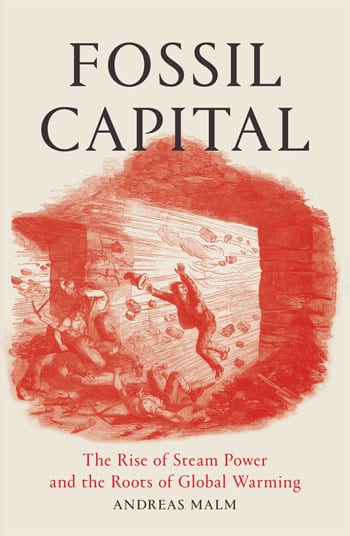 Fossil Capital: The Rise of Steam Power and the Roots of Global Warming
by Andreas Malm (Verso, 2016)

Fossil Capital explores the crisis posed by climate change by looking at the origins of capital’s dependence on fossil fuels. It is a significant contribution and sound introduction to Marxist ecological thought. Above all the book demonstrates how capital accumulation and the global climate have a deep and inseparable relationship, and in particular that the history of the working class is an environmental one.

The question of why capitalism is still overwhelmingly wedded to fossil fuel consumption is approached in two ways: by investigating the original transition to fossil fuels, then asking what the nature of their interrelation with accumulation suggests about the prospect of a sufficient transition to renewable energy. Malm proposes a rereading of the eclipse of water by steam power in the period 1825-1850, arguing that the defeat of the British working class movement was a key moment in the emergence of fossil fuels as the “general lever for surplus value production”.[1] The consequences of the transition – the compulsion to accumulate capital through relative surplus value (the speeding up of production by technical means) – illuminate the difficulties of a going beyond fossil fuel-based capitalism in the present day; while the workers’ movement’s original confrontation with steam offers our movement much to aspire to.

The transition to steam

The first trial of Watt’s double-rotating engine in the cotton industry ended poorly, principally due to the costs of the machinery and its fuel compared to the naturally-occurring power of rivers and waterfalls.[2] For a technology with these attributes to court mass popularity, the conditions in industry could only have been such that mill owners prioritized concerns for control over the labor process above the cost of mechanization. Mill owners sought solutions to the industrial crisis in 1825, which compounded the recurring lapses of wages beneath the cost of subsistence. In this setting embezzlement was rife and labor militancy was fermenting. But wage rises were “out of the question”, other than where mass strikes forced employers into concession, endangering profits and deepening the crisis further.[3] In this setting a shift to the power loom was a preventative investment against theft; for cotton capital as a whole, it achieved the consolidation of power over the labor process. Steam power also “had the prime advantage of overcoming the barriers to procurement not of energy, but of labor”[4] in its ability to adapt to the urban environment,thereby “relieving us,” as J.R. McCulloch referred to his class, “from the necessity of building factories in inconvenient situations merely for the sake of a waterfall. It has allowed mills to be placed in the centre of a population trained to industrious habits”.[5] The proximity of factories to populous towns moreover freed the capitalist from the care and responsibility for child laborers – an advantageous development as many capitalists puzzled over how the coercive apprentice system instilled“no desire to perform labor” among its young participants.[6]

In Marx’s view, machinery is “is a power inimical to [the worker], and capital proclaims this fact loudly and deliberately, as well as making use of it. It is the most powerful weapon for suppressing strikes, those periodic revolts of the working class against the autocracy of capital”. It was a crucial tool which the mill owners employed to stymie the labor unrest which “threatened to drive the infant factory system into crisis”.[7]

Ultimately the transition to steam power offered capital the ability to discipline labor through relocation to settings with a high surplus population, enabling it to seek out the most profitable pools of labor power, to level down wages, and to enforce an accelerated and regular industrial output. This presentation of the transition as a formof crisis resolution in response to workers’ agitation offers a key insight as to why capital has continued to fuel climate change. The general adoption of high pressure steam power in British cotton production after 1850 entailed the increasing dependence of economic growth upon a steady expansion in coal supply.[8] In a competitive market this translated to “grow by burning or die”.[9] Malm suggests that this developed to the extent that fossil fuels became “the general lever for surplus-value production”.[10] Thus a significant part of the climate crisis with which we are confronted today was itself the infant of crisis conditions. Capital’s response in that instance was to subject labour to the rhythm of machines – an approach maintained throughout its history.

The climate of the factories

Malm tentatively highlights the environmentalist dimensions to worker resistance to the imposition of machinery, and in particular the 1842 general strike. “There is a current of unsuccessful opposition to steam running all the way from the Albion Mill to the late nineteenth century, waiting to be uncovered”; its literature bore “the persistent imagery of belching smoke and consuming fire, noxious atmosphere and receding nature, extinct vegetation and unbearable heat – ‘the people looked parboiled.’” But capitalists’ opposition to legislation to limit pollution and the unbearable climate of the factories was successful. Manufacturers commonly claimed the quantity of smoke in Manchester was a barometer of its prosperity.[12] The effect of the Ten Hours Act (1847) was limited by speeding up the machines through higher pressure. Indeed, according to von Tunzelmann, the Ten Hours Act was “probably the most important determinant’ of the rise of high-pressure steam and, by extension, the final victory of the engine in the cotton industry (and beyond)”.[13] This illuminates how relative surplus value is a response compelled by labor insurgency in its struggle against capital. It was a technological and organisational fix to the crisis presented by militant labor, a victory for capital on the back of a military intervention against the attempts at insurrection. The working class movement took decades to recover from this defeat – with its environmental concerns largely suppressed until the work of avant-garde writers such as William Morris.

The path of capital in spite of the scientific research into global warming reinforces Marxian value theory: “capital recognizes no boundary in nature… solely concerned with the expansion of abstract value, it can drain nature on biophysical resources without really noticing what is in there, its eyes firmly fixed higher”—on its profits.[14] Moreover Malm has transposed Marx’s argument on the organic composition of capital (the ratio of dead to living labor, increasing over time and producing a falling rate of profit) into a rising fossil composition of capital.[15] “[O]perating over the span of history,” the tendency of capital to reduce the portion of human labor relative to machinery “translates into a law of a rising concentration of CO2 in the atmosphere”.[16] These dynamics, plus those of relative surplus value, having been first properly expressed during the consummation of coal and the cotton trade, lay the contradictory foundations of global climate change, through the necessary production of CO2 as condition to surplus value. Part of the conditions to accumulation is the primitive accumulation of fossil fuels – “for capitalists to burn fossil fuels, there have to be other capitalists specialized in their production, and for the former to burn more, the latter have to deliver it in greater quantities, the two cycles ever intertwined”—which forms a permanent foundation for the fossil economy.[17]

Malm polemicizes against the dominance of geography in Marxist thinking, but spatial contradictions are dominant in the tendencies he identifies, betraying this conviction. The transition to steam was dependent upon the reordering of nature to produce in a “unique form of spatiality” out of the tension between the mobility of the stock (coal) vis-à-vis the “stillness of the waterwheel”.[18] Likewise, as he traces the development of fossil capital into the present, the dynamic of relocation and mobility is central. For example, Chinese industrial militancy – steadily rising in confidence since 2010 – poses a threat to cheap labor power (pertinently China’s output counted for 55% of the global emissions figure between 2000 and 2006, and up to two thirds afterward).[19] Yet business owners were shocked at prospects of relocation due to poor fossil fuel infrastructure at alternative sites: Asian and sub-Saharan locations suffer from overburdened electricity grids, while to counter this the Vietnamese state “pledged to accommodate incoming capital – above all by establishing coal mines and coal-fired power plants”[20]  The basic tendency of capital to relocate in pursuit of cheap labor therefore increases carbon intensity.[21] Indeed, “[s]preading factories across more Asian countries to safeguard against bolshiness would translate into more chimneys in more places, more fragmented–integrated production chains, more self-reinforcing spirals of accumulation…”[22] On this basis Malm adds to Bev Silver’s observation that “where capital goes, labor-capital conflict shortly follows” by suggesting that “where capital goes emissions will immediately follow”.[23]

Capital’s drive for mobility and flexibility paradoxically “ends up fixing capital ends up fixing it in ultra-heavy means of production and transportation” (power stations, factories, railways etc.), undermining further relocation, as capitalists are inclined to keep their sunk investments in operation for as long as possible.[24] As David Harvey has noted, when“capitalists purchase fixed capital, they are obliged to use it until its value (however calculated) is fully retrieved”.[25] This basic tendency behind the continued burning of fossil fuels stems from the geographic characteristics of fixed capital, and is exemplified in the fact that two-thirds of American power plants built since the 1890s still remain in use.[26] Until labor challenges the movements inherent to capital accumulation, this is likely to remain the case.

Luke Neal is an activist based in Manchester, UK. He is currently working on an MA dissertation on climate change, ecology and Marxist theories of crisis.