Received wisdom says that to save the planet we have to change our eating habits. Elaine Graham-Leigh explains why the received wisdom isn’t just wrong, it blames working people for a crisis they didn’t cause. 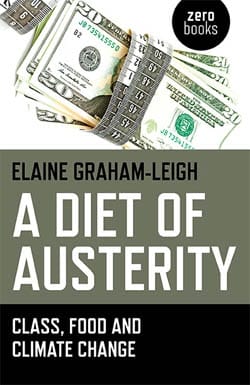 Like the author of this interesting book on food and climate change I have been struck by the way that the question of diet, and in particular meat eating, has become central to debates on tackling climate change. In her introduction Elaine Graham-Leigh notes the many ways that advocates for non-meat diets are inserting this message into the climate movement. Slogans that argue that only vegetarian diets can save the planet, or that genuine environmentalists are vegan are common place. But the argument has also reached higher levels, with NGOs, governments and politicians frequently advocating this approach.

Graham-Leigh’s book is a challenge to this approach. She rightly argues that the danger is that it fails to address the real causes of climate change, will not actually have the desired effects and most importantly, it shifts the focus of blame for climate change onto predominately working class people.

Unusually for a book on the environment, class is a central part of Graham-Leigh’s book. She notes that “as with discussions of austerity, it seems that those who have the least are the ones who have the greatest responsibility to be restrained in consuming it”. Graham-Leigh illustrates this by quoting Jonathan Porritt in 2004, who argued that meat-eating was a “moral outrage and a threat to ourselves… and future generations” but that his real problem was with “cheap meat”. She argues that “the concentration here on price suggests that what is problematic here is not bourgeois meat consumption, but consumption by the poor, who would not be able to afford to do it if it were priced ‘properly’.”

This leads to an important insight by Graham-Leigh:

“What we are seeing here is the general panic about obesity becoming a vehicle for expressing ruling-class fears about the demands and appetites of the poor, fears which are particularly pointed at a time when working-class living standards are under attack.”

Much of the environmental movement sees consumption (of commodities, not just food) as the driving force of environmental destruction. Because of this focus, tackling climate change becomes a question of demanding that people purchase less, eat less, waste less. While there can seem to some logic to this, it misunderstands the nature of capitalism and how the system causes environmental damage.

At the heart of this book is an explanation of how capitalism’s need to accumulate for the sake of accumulation drives environmental destruction. Contrary to popular belief, and the hopes of those who advocate consumerism as a solution to environmental problems, production under this system is not driven by consumer demand, but by the desire to maximize profits. The book has some fine examples of how corporations have manufactured needs in order to sell new commodities. Notable among this is the example of the way that processed foods, frequently highlighted as particularly damaging to the environment and health, are preferred by capitalists because the processing itself adds layers of profits.

Thus Graham-Leigh shows how the “choices” people make about what food to buy and eat are not made in a vacuum, but are the result of the nature of the system and government policy. It is also the result of the food system itself, dominated by the interests of supermarkets, which causes enormous amounts of waste at all stages of the food system. Once again, rather than the problem being workers buying too much food and then throwing it away, it is a food system whose major components have a “business model [which] is based on procedures which entail wastage”.

The book is an important Marxist contribution to contemporary debates about food and climate change. If I have one criticism it is that Graham-Leigh deliberate ducks the question of the “future socialist society” in her final chapter. She argues that it is “counterproductive… to prescribe what a different society after capitalism might look like.” While we cannot “prescribe” it, we can at least argue on the basis of historical experience what some elements of that society might be, and how they can be part of an alternative to capitalism. Of particular importance in this regard is the idea of democratic planning, which I think holds the key to how future societies could deal with the question of feeding the world in a sustainable way. I think it’s a shame that Elaine Graham-Leigh didn’t explore this a little bit more, as it weakens what is an otherwise important book.