Syriza’s colors are red and purple and green, identifying it as socialist, feminist and environmentalist. Its platform includes all the key demands of the Green Party.

Syriza’s colours are red and purple and green, identifying it as socialist, feminist and environmentalist. The party platform includes all the key demands of the Green Party.

The election victory of the left-wing Syriza coalition in Greece has spurred widespread comment and discussion. On the right, some commentators warn of imminent catastrophe while others urge negotiations. On the left, some hail it as huge step for anti-capitalism, some see it as positive but express concerns, and some (inevitably, it seems) are already denouncing it as a reformist betrayal-in-progress. We can be sure that there will be much more discussion and debate as events unfold.

The article below offers a perspective that has not yet received much attention, identifying Syriza as part of a trend towards left-green alliances across Europe. It is reposted, with the author’s permission, from Bright Green. 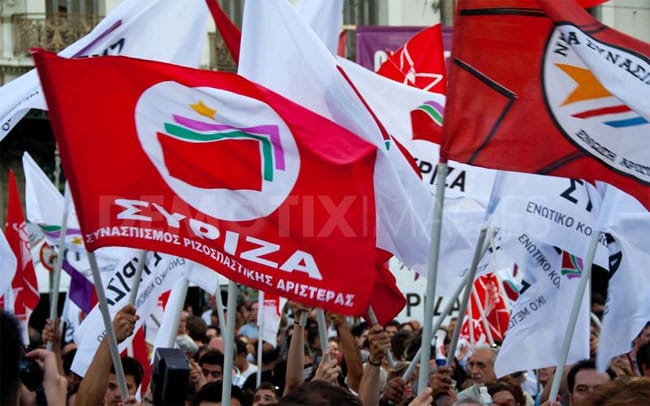 Adam Ramsey is a green activist based in Oxford, England, and co-editor of the Our Kingdom blog.

The sound system was playing Bella Ciao. Flags of parties from across the left and the continent wiggled as their bearers danced and sang along. Ouzo flowed and fireworks flared. We could have been outside a G8 summit in the early noughties.

Only the explosives weren’t directed at police lines, but in the air. The crowd chanting at the politician wasn’t protesting. It was cheering. An international movement which has become very good at licking its wounds was pretty quick to learn to celebrate. In fact, with perhaps 10% of the people at the rally in front of the Athens academy coming from outside Greece, this was very much a party for the European left – in the beer, loud music, and dancing sense of the word.

But also, of course, in the political sense. So I should be clear. When I say that Syriza’s victory is in a sense the first Green government in Europe, it’s obviously not just Greens. Because Syriza is effectively a merger between most of the left wing parties in Greece, most left parties in Europe can reasonably see it as their sister. It has already been seen for a couple of years now as the archetypal party of the European left.

Having said that, there is a remarkable extent to which Syriza is in practice a Green government. First, the Greek Green Party is a part of the Syriza coalition – they got one MP elected, who was promptly promoted to deputy environment minister. Secondly, as Kostas Lukeris, a member of the Greek Green Party’s ruling council put it to me over souvlaki on Syntagma square on the day of the vote “they adopted all of our platform.” Look through the policy commitments of Tsipras’ government and the manifestos of the Green parties in the UK, and you’ll find little to separate them.

Some of these similarities are unsurprising, and could be found within the platform of most contemporary parties of the left – rejecting austerity, opposition to privatization. Both have campaigned for a crack down on tax dodging. Both are generally against corporate domination of politics and the corruption that comes with it.

Some of the similarities are on issues which haven’t always united those on the left but which tend to today. Twenty years ago, there were active socialist traditions which saw feminism, anti-racism, LGBTIQ rights and environmentalism as “bourgeois deviationalism” – as distractions from class struggle. Many within these traditions were in practice homophobes, sexists and smokestack industrialists who saw environmentalism as standing in the way of their five year plans. Look to George Galloway’s comments on Julian Assange, and it’s clear that these sorts of people are still around. But they are not Syriza – whose colors are green and purple as well as red, indicating that they are proud feminists and environmentalists as well as socialists.

I could go even further: they support decriminalization of drugs, cutting military expenditure and the introduction of direct democracy in some areas. They have already scrapped two of the tiers of school exams. These are not policies universally supported across the left. But they are to be found in Green manifestos across Europe.

Then there are a few issues on which the original Syriza coalition needed to be pushed. When the Greek Greens discussed merging into the broader party, they first published a list of twenty one demands – policies Syriza would have to adopt in order to get this support – the things they didn’t already agree on. The list includes independence from fossil fuels within 20 years, addressing desertification by supporting forests, protection of fisheries; participatory processes in public services, equal treatment of the islands in what they see as an over-centralized state. Syriza accepted every one of the policies.

None of this was easy for Greens – who ended up shedding their more liberal wing to the Potami list (“the hipster party,” as my Green friend called it) and a couple of egos to another left alignment before they joined the Syriza list. But ultimately, it’s looking like the party can celebrate a significant victory in part as a product of its pains.

The Left Has Changed

None of this feels at all surprising, for two reasons. Firstly, the left across Europe, probably across the world, has changed significantly in the past twenty years. It’s no longer acceptable to ignore the interlocking struggles against different forms of oppression. Since 9/11 and the Iraq war, it’s been impossible to avoid accepting anti-imperialist arguments. Since the financial crash, you can’t really be progressive and ignore macro-economics and the struggle against neoliberalism. As the climate has changed, few reject the basics premises of environmentalism any more. In other words, where the reference points for the left were once where various groupings stood on particular bits of the history of the Soviet Union, a new generation has emerged where the relevant questions are very different. The cracks of the past have started to heal in the heat of history.

In these contexts, it’s not surprising that we’ve seen a bit of a realignment, with much of the socialist left moving into a space once occupied more uniquely by (some in) the Greens, and some of Europe’s Greens (including those in the UK) getting better at articulating explicitly anti-neoliberal economic arguments. In a sense, Syriza is a product of those forces.

Secondly, it’s worth understanding Syriza’s own specific history. The party is a coalition, but its biggest section, the one from which Alexis Tsipras came, was called Synaspismós tīs Aristerás tōn Kinīmátōn kai tīs Oikologías. Or, in English Coalition of Left, of Movements, and Ecology. Its roots were in Eurocommunism – the Gramscian corner of communism which was critical of the Soviet Union. In England, its sister organisation “Democratic Left” went through various permutations and ended up as the campaign group “Unlock Democracy.” Democratic Left Scotland still exists, and provides a useful non-partisan forum to discuss politics under the slogans “there’s more to politics than parties” and “radical, feminist, green.” Their colors are, like Syriza, still red, green and purple. Its membership includes the Scottish Green Party co-convener, Maggie Chapman and many other prominent people in the party (and, less significantly, me).

Eurocommunists were in many ways like the old New Left – accepting of broader struggles ‘beyond the class struggle.’ Likewise, they tended to have a more discursive rather than dogmatic approach to social change, keen to bring together coalitions and to constantly step back and reappraise what they ought to be doing, rather than following any one handbook. On a night out with a senior figure in Syriza’s youth wing, they jokingly emphasized this point when being indecisive about which pub to go to.

If all of this sounds a little like Green Parties, that’s, essentially, because it is. Look at the lineage of Greens across Europe, and you’ll repeatedly find it criss-crossing with a mixture of the New Left and Euro-communists. The Dutch Green Left Party, for example, was formed from a merger between its Eurocommunists and others, and prominent English Green member Bea Campbell was once one of Britain’s best known Eurocommunist activist.

Let me put it another way: each country has its own history, context and traditions. But many of the people who have ended up in the Green Party in the UK come very much from the same political tradition as those who are now running Greece: a mixture of the anti-capitalist but anti-Soviet left of the 70s and 80s, the anti-globalization then anti-Iraq War movement of the 90s and noughties and the anti-austerity movement of the twenty teens. This heritage isn’t unique to Greens by any means, it’s a history on which much of the European left can draw. But Greens have as much right to lay claim to it as does anyone else.

Driving to a polling station in Athens’ working class docks area with the national campaign coordinator of the Greek Green Party, he told me that he had been surprised how keen Syriza had been to include Greens in their coalition – they had never had an MP, and didn’t bring with them a huge swath of votes. But then, he said, he realized the cause of their enthusiasm. They needed European partners. Adding the European Greens to their list of sister parties brings a big block of support across the continent.

And perhaps most importantly, there are lessons to be learnt. As they dance to the music of time, most of the left in Greece has found itself aligned – at least for now. While the instruments across Europe may be different, the drums are thumping the same beats. In the UK, by far the biggest of Syriza’s sister parties is the Greens. And, with Plaid Cymru backing a Green vote in England, perhaps some of the spirit of collaboration could, like all the best tunes, be infectious?