Book review: “Economic expansion is unavoidable under capitalism, and destruction of the planet is the inexorable result.” 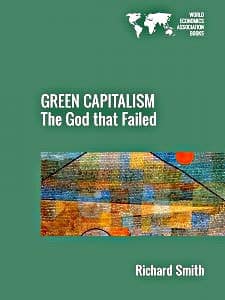 The climate crisis is the greatest threat humanity has ever faced. At the current rate of global greenhouse gas emissions, warming of the planet will shoot past two degrees Celsius by mid-century and reach 4°C to 6°C beyond pre-industrial averages by 2100. The magnitude of the impending catastrophe was eloquently described by Hans Schellnhuber, Director of the Potsdam Institute for Climate Impact Research, when he said, “the difference between two and four degrees is human civilization …” Adding to that, the biosphere faces massive pollution, resource depletion, species extinctions, ocean acidification, among other looming dangers.

But can we save ourselves? In his new book, Green capitalism: the god that failed, Richard Smith argues compellingly that “sustainable production is certainly possible but not under capitalism” and even more forcefully, “capitalism and saving the planet are fundamentally and irreconcilably at odds.” To this central question, Smith brings an impressive command of economics and an engaging conversational style of writing. He explains and illustrates with devastating clarity the key mechanisms of capitalism that force it to grow unendingly, and these explanations are supported with a broad array of examples of corporate and national economic practices from around the world.

Green capitalism: the god that failed is a compilation of previously published complementary essays. The first of the five chapters reviews the writings of Adam Smith and the historical transition to capitalism in Europe. Chapter 1 explains how, right from the start, market competition led to rapid innovation which in turn led to expansion of the market, a cycle that has continued ever since. Capitalist economics, therefore, had ecological implications from its inception, distinct from all earlier periods.

Ecological implications, however, are ignored by mainstream economists. In this respect, Smith reports that, “introductory macroeconomic textbooks used by most US economics departments is revealing of the profession’s lack of contact with reality.” Mainstream economists, from Milton Friedman to Paul Krugman, recognize the necessity of unending economic expansion with rising consumerism. Without that capitalism would collapse. According to Krugman, “…while it will be a shame if Americans continue to compete over who can own the most toys, the worst thing of all would be if the competition comes to a sudden halt.”

Economic expansion is unavoidable under capitalism, and destruction of the planet is the inexorable result. As Smith summarizes,

“insatiable growth and consumption is destroying the planet and dooming humanity — but without ceaselessly growing production and insatiably rising consumption, we would be even worse off. Such is the contradictory and suicidal logic of capitalism.”

Even setting aside the destruction of the planet, the invisible hand of the market has failed in its own terms. Richard Smith reminds us that

“Two-and-a-quarter centuries after [Adam] Smith wrote, global capitalist development has produced the most obscenely unequal societies in history, with half the world living on less than two dollars a day, billions of people living in desperate poverty,…”

Against the economic mainstream, a handful of economists propose sustainable capitalist models, such as degrowth or steady-state versions of capitalism, or “green capitalism” in which technological advances, recycling , and a “dematerialized economy” would somehow permit unending yet sustainable growth. In Chapters 2 and 3, Smith takes them on by name and in considerable detail. The disagreements are not merely academic. Smith’s powerful rebuttals are of critical importance because most environmental leaders in the US subscribe to some version of degrowth or green capitalism through their words, their actions, or simply their failure to identify capitalism as the threat to survival.

As Smith shows, the problem isn’t that we are “addicted to growth” or that perpetual growth is a “spell,” as Bill McKibben put it (and Smith cites). Even Naomi Klein’s important book This Changes Everything: Capitalism vs the Climate, which Smith critiques in Chapter 4, focuses largely on “unregulated capitalism” as opposed to capitalism. Consider also the obsession with neoliberalism by so many writers in the mainstream progressive media, who rarely if ever indict capitalism without a preceding adjective. The villains for them are “corporate capitalism,” “casino capitalism,” etc., rather than capitalism itself.

In sharp contrast and with refreshing clarity of thought, Smith explains “why ecologically suicidal growth is built into the nature of any conceivable capitalism. This means … that the project of a steady-state capitalism is impossible and a distraction.” In particular, “under capitalism, the whole point of using resources efficiently is just to use the saved resources to produce even more commodities, to accelerate the conversion of even more natural resources into products.”

This cannot be avoided under capitalism without causing economic collapse. “Insatiable consumerism is an everyday requirement of capitalist reproduction… No overconsumption, no growth, no jobs.” Why no jobs? Consider that “more than two-thirds of market sales, and therefore most jobs, depend on direct sales to consumers while most of the rest of the economy, including the infrastructure and military is dedicated to propping up this consumerist ‘American way of life.'” Even ignoring that, how could capitalism ever achieve a steady state? ”

Are Toyota or General Motors looking to produce the same number of steel cars next year as this year?” Smith asks.

Similarly in Chapter 3, which bears the same title as the book, Smith demolishes green capitalist hopes through five theses on the nature of any capitalism. The fifth of these directly challenges popular myths of “spells” and addiction to growth:

“Consumerism and overconsumption are not ‘disposable’ and cannot be exorcised because they are not just ‘cultural’ or ‘habitual.’ They are built into capitalism and indispensable for the day-to-day reproduction of corporate producers in a competitive market system in which capitalists, workers, consumers and governments alike are all dependent upon an endless cycle of perpetually increasing consumption to maintain profits, jobs, and tax revenues…”

In the final two chapters, Smith outlines ecological constraints necessary for any post capitalist economy, and describes ecosocialist alternatives to capitalism. The necessary changes are staggering. The entire economy must contract and be restructured with international cooperation. Capitalism is incapable of finding jobs for workers unemployed by degrowth, even though much expansion is needed in social services like health care, education, environmental remediation, etc.

“Since we live under capitalism, not socialism, no one is promising new jobs to all those coal miners, oil drillers, gas frackers, power plant operators, farmers and fertilizer manufacturers, loggers and builders, autobuilders, truck drivers, airplane builders, airline pilots and crews and the countless other occupations whose jobs would be at risk if fossil fuel use were really seriously curtailed.”

Smith recognizes that building a movement requires more than being against ecocidal destruction; it requires a vision for the future. To that end he outlines a number of attractive and attainable features of an ecosocialist society.

Green capitalism: the god that failed is essential reading for anyone opposed to planetary suicide. Capitalism is waging a war against nature. And until this is becomes obvious to masses of people, we will be limited to reformist projects that can only slow the drive to oblivion, but not stop it. As Smith reminds us, “it is no exaggeration to say that this is the most critical moment in human history.”

David Klein is the author of Capitalism and Climate Change: The Science and Politics of Global Warming, and a member of System Change Not Climate Change