Participants in this graduate seminar “were united in expressing surprise at just how prescient Marx’s observations regarding human-environment relations were.”

Simon West is a PhD student at the Stockholm Resilience Centre and the Department of Systems Ecology at Stockholm University. His subtitle for this essay is: Reflections on Week Two of the Resilience Research School PhD course, ‘Why Bother with Durkheim? Using (classical) social science to understand the social dynamics of social-ecological systems.’

Reposted, with the author’s permission, from the blog Resilience Science: Navigating the surprises of the Anthropocene. 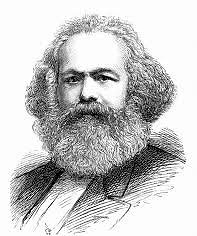 This is troublesome for young interdisciplinary researchers – the ‘intimidation factor’ is enormous. However, this fear factor does not only, or perhaps even primarily, come from Marx himself, but from his coterie of followers and interpreters. Autonomist Marxism, Marxist Humanism, Analytical Marxism,Cultural Marxism, Structural Marxism, Marxist Theology, not to mention fields that borrow heavily from Marxist critique such as political ecology and critical theory – the extensive knowledge and passion that Marx-inspired sub-fields bring to the surface demonstrate his continued vitality, but also alienate many who might be surprised by the content of Marx’s original texts.

In this class we put chapter 15 of Marx’s Capital, ‘Machinery and Large-Scale Industry,’ into dialogue with John Bellamy Foster’s 1999 article, ‘Marx’s Theory of Metabolic Rift: Classical Foundations for Environmental Sociology.’

We did not attempt a close reading of Marx’s chapter, a la David Harvey (who once dedicated almost a whole class to a single footnote!), but rather used it as a springboard to identify potential areas of use for social-ecological systems research.

Course organiser Wijnand Boonstra set the scene in an introductory lecture outlining Marx’s personal and social context, including his lifetime friendship and collaboration with Friedrich Engels, “Marx’s general”. Marx remarks in his infamous footnote (see above) that, “a critical history of technology would show how little any of the inventions of the eighteenth century are the work of a single individual.” The same is true for the products of 19th century social science. How could two young men who had no personal experience of industrial exploitation write about the debilitating effects of capitalism on the poor with such accuracy? An intriguing article published last year suggests an answer may be found in the sharp intellect and companionship of Engel’s working-class companion Mary Burns. It is thought that Mary, believed to be a prostitute by some historians, guided Engels through the slums of Manchester, providing him with an immersive experience of the poor that otherwise would have been impossible for the son of a wealthy mill-owner.

In the subsequent discussion groups, we moved from the complex, unpredictable and dynamic interactions of interpersonal history to the equally complex and adaptive relationships between humans, machines, work and nature through time.

Discussions initially revolved around Marx’s concept of ‘metabolic rift,’ as elaborated by Bellamy Foster. For Marx, human-nature relations include a social-ecological metabolism carried out through labour processes:

“Labour is, first of all, a process between man and nature, a process by which man, through his own actions, mediates, regulates and controls the metabolism between himself and nature. He confronts the materials of nature as a force of nature. He sets in motion the natural forces, which belong to his own body, his arms, legs, head and hands, in order to appropriate the materials of nature in a form adapted to his own needs. Through this movement he acts upon external nature and changes it, and in this way he simultaneously changes his own nature … It [the labour process] is the universal condition for the metabolic interaction [Stoffwechsel] between man and nature, the everlasting nature-imposed condition of human existence….” (Marx 1976 [1867]: 283, 290)

Marx, using the ecological crisis of large-scale soil degradation in United Kingdom during the first half of the 1800s, identified a ‘rift’ in this metabolism. Prior to industrialization soil nutrients were replaced by rural populations living off the land. But with the invention of Watt’s coal and water-fuelled, double-acting steam-engine, machines became mobile and “permitted production to be concentrated in towns instead of being scattered over the countryside.” (Marx 1976 [1867]: 497-498) The English countryside depopulated while in crowded London nutrients were washed away in the Thames. This ‘rift’ – produced by growing differences between the urban and rural – supported Marx’s broader claim that capitalism is inherently self-destructive.

It was suggested in the discussion groups that a ‘rift’ between humans and nature has been postulated in many academic traditions. However, the temporal location of this rift varies – for some, perhaps Marx, the origin of the rift emerged the moment humans began to modify their environment through culture (yet only became problematic during the second industrial revolution). Others, such as the environmental historian Donald Worster, might associate it with the European discovery of the Americas in the 15th and 16th centuries. Earth system scientists on the other hand have suggested the ‘great acceleration’ of the second half of the twentieth-century.

Discussion turned towards the Stockholm Resilience Centre’s own plea for a ‘Reconnection to the Biosphere’ – and where and how, given Marx’s understanding of social-ecological metabolism, this ‘reconnection’ should take place. Should emphasis be placed on personal epiphanies and behavioural change? Should it be aimed at changing government policy or encouraging grass-roots innovation? Should it be geared towards challenging dominant power structures?

Discussants were united in expressing surprise at just how prescient Marx’s observations regarding human-environment relations were. Indeed, some sentences could conceivably have been used in the Brundtland Report (1987):  “Even an entire society, a nation, or all simultaneously existing societies taken together, are not owners of the earth. They are simply its possessors, its beneficiaries, and have to bequeath it in an improved state to succeeding generations as boni patres familias [good heads of the household].” (Marx 1959 [1894]: 530) Of course, the authors might have struggled getting such policy traction with a document explicitly quoting Marx!

What might the concept of social-ecological metabolism be useful for and what might it leave out? It was posited in class that the concept of ‘metabolism’ might be a useful way of understanding how the ‘social’ and ‘ecological’ components of SES interact and transform each other, and indeed some work has already been done using the concept of metabolism to understand human impacts on the earth system in the Anthropocene. SRC Professor Garry Peterson suggests that while metabolism might work for biogeochemical issues, complex systems approaches, which focus on populations, heterogenity and diversity, are more useful for thinking about many of the novel aspects of the Anthropocene, such novel ecosystems. On the other hand, it might be intriguing to explore new kinds of ‘rift’ in a globally connected world, such as the concept of teleconnected vulnerabilities. Establishing such bridges and disconnects between academic traditions was precisely the type of debate we hoped the course would provoke.

As a systems thinker, Marx believed that history progressed through revolutionary, cyclic change. A very related idea was later captured with the term “punctuated equilibrium” (Gould and Eldredge 1977). Often labeled a simple determinist because of his emphasis on the defining force of materiality on the social, Marx actually advocated a more subtle co-evolution between nature and culture, which Engels, in a letter written after Marx’ death, explains as follows: “The political, legal, philosophical, literary, and artistic development rests on the economic. But they all react upon one another and upon the economic base. It is not the case that the economic situation is the sole active cause and everything else is merely a passive effect.” (Engels 1894 in Elwell 2008: 22) Here it is the interaction between the material and the ideational that produces social change.

Class discussants identified parallels and disconnects between this cyclic vision of human history and the adaptive cycle & panarchy heuristics used in resilience research. 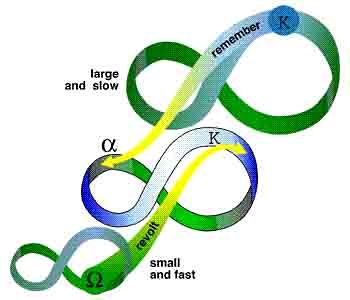 Two features distinguish a panarchic representation from traditional hierarchical ones. The first is the importance of the adaptive cycle and, in particular the alpha phase as the engine of variety and the generator of new experiments within each level. The second is the connections between levels. There are potentially multiple connections between phases at one level and phases at another level, but two are most significant in our search for the meaning of sustainability. Those are the connections labeled as Revolt and Remember

Both approaches, to some extent, embrace a fatalistic approach to change and disorder. Still, both approaches seem to leave some room for agency, although perhaps in Marx’s case implicitly. “Men make their own history, but they do not make it as they please; they do not make it under self-selected circumstances, but under circumstances existing already, given and transmitted from the past.”  (Marx 2007 [1852]: 112)

Attention in resilience research is increasingly turning explicitly to individual and collective agency to understand the dynamics of transformation in social-ecological systems.

Course participants imagined how Marx would interpret current attempts to ‘reinvent the system’ towards more sustainable trajectories. Transition towns as a movement to heal the metabolic rift, or as a bourgeois hobby? Ecosystem services as product of capitalism, or revolutionary re-valuation of capital?

Whether these initiatives contain the seeds of transformation or become colonized by a capitalist system would, according to Marx, probably depend on their historical, dialectic relations, which are uncontrollable. In Marx’s work you won’t find any descriptions of social-ecological systems, or causal loop diagrams that highlight its inner workings [See below for an attempt by course participant Diego Galafassi to work through the concept of ‘metabolic rift’ using a causal loop diagram]. Instead he points out crucial elements – labour objects; nature; technology; society; mentalities; human nature – that form concatenating relations and shape human history. These interactions are forever changing – an understanding he adhered to since his PhD thesis on Epicurus – symbiotic and parasitic at the same time. 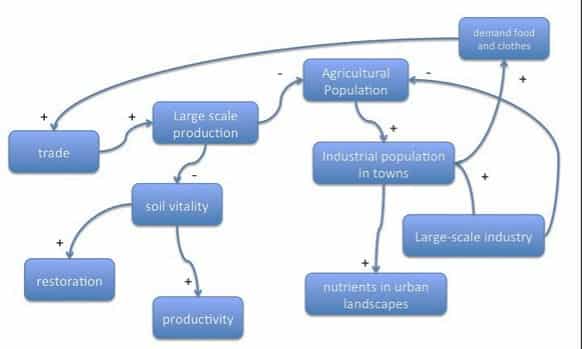 An interpretation of the concept of ‘metabolic rift’ as a causal loop diagram by course participant Diego Galafassi.

Marx also applies dialectics – thinking in inherent contradictions – to (scientific) hermeneutics. “It is characteristic of the entire crudeness of ‘common sense,’ […], that where it succeeds in seeing a distinction it fails to see a unity, and where it sees a unity it fails to see a distinction. If ‘common sense’ establishes distinction determinations, they immediately petrify surreptitiously and it is considered the most reprehensible sophistry to rub together these conceptual blocks in such a way that they catch fire.” (Marx in Ollman 2003: 77) ‘Rubbing conceptual blocks’ captures eloquently what we now would understand as interdisciplinary science. Does this mean that we are on our way to transdisciplinarity after all?

Ollman, B. 2003. The dance of the dialectic. Steps in Marx’s method. Urbana and Chicago: University of Illinois Press.