The movement that stalled after the failed climate talks in Copenhagen 2009 is back on the streets – bigger, stronger and more confident than ever

by Martin Empson
author of Land and Labour, and treasurer of the Campaign Against Climate Change Trade Union group

Some 20,000 people marched through central London on Saturday, in the Time to Act! protest, demanding that climate change be taken seriously by political parties in the coming UK General Election. Time to Act!, launched by the Campaign Against Climate Change, brought together a wide coalition of environmental and left wing organisations. The march was young, vibrant and diverse: placards from the Greens, Socialist Worker and Left Unity mixed with banners and flags from Friends of the Earth, Greenpeace, the Peoples’ Assembly and trade unions.

Plans for demonstration the protest drew national media attention when the London Metropolitan Police refused to police the event and close roads, insisting that the organisers pay for a private company to manage the demonstration. Activists pointed out that this effectively meant denying the right to protest as only groups with wealthy backers could demonstrate. After 70,000 people signed a petition in support, and many different campaigning organisations stated that they would refuse to pay for future events, the police relented, at least temporarily. On the day police vehicles and uniformed officers did close the roads, provoking ironic comments from speakers.

A key goal of Time to Act! was to build further unity between the environmental movement and British trade unions. The Campaign Against Climate Change has had great success over the years with its “One Million Climate Jobs” campaign. A report published by the campaign, now backed by six national unions, argues that part of the solution to climate change is the creation of a national climate service that can create jobs in industries that will reduce emissions drastically. 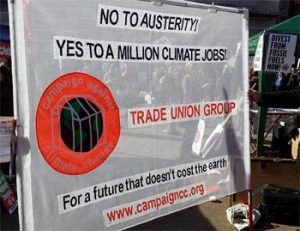 Support for this was reflected on the day – both the Fire Brigade’s Union (which brought a fire engine and sound system) and the Public and Commercial Services union spoke at the rally. Chris Baugh, deputy General Secretary of the PCS, pointed out that up the road from the demonstration, the National Gallery’s exhibition space was in part sponsored by oil company BP, while union members working in the gallery have had to strike repeatedly against outsourcing and privatization of their jobs. Matt Wrack of the FBU, pointed out that his members were facing cuts at the same time as they had to provide the emergency response to floods and fires that result from climate change. Both speakers were loudly cheered, particularly when they pointed out that the money spent on bailing out the banks could and should have been spent on improving services and acting on climate change.

The size of the demonstration reflected a rebirth and growth of the British environmental movement. It is the second significant protest in less than a year – last September over 30,000 joined a demonstration organised by the large environmental NGOs and the campaigning group Avaaz. But Time to Act! also showed a growing unity between different campaigns. Local anti-Fracking groups were very visible, as were activists in the campaigns against expansion of London’s airports.

But what stood out for me was a sense of a wider environmental movement moving beyond single issues.

Naomi Klein spoke to the audience by video link from the United States. Her book, This Changes Everything, has been influential on the environmental movement in the UK, helping to connect the question of climate change to wider social and political questions. Thus the protest felt very like the anti-capitalist events of the 2000s. Wider links were also made, including a call from the Stand Up to Racism Organisation for people to join national anti-racists protests on March 21. 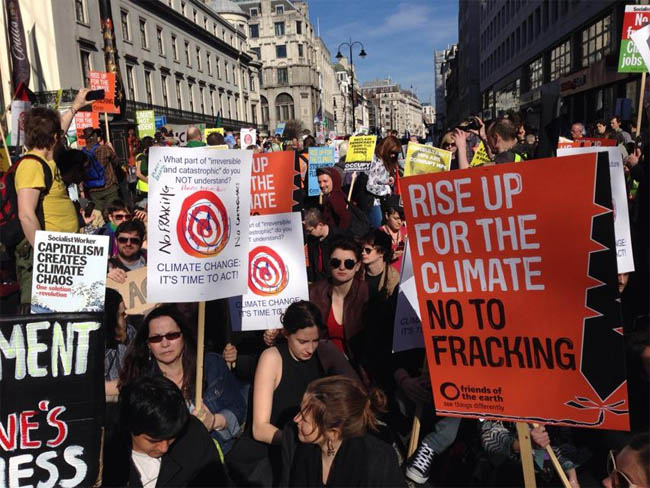 The protest organizers had asked groups to form “blocs” to reflect their passions and interests. There were blocs for cyclists and energy campaigners, anti-airport activists, students and vegans – and, perhaps most importantly, one for “anti-austerity and climate jobs” campaigners, which merged as the march progressed, helping to fuel the sense of a movement challenging the priorities of a system that put the maximizing of profits before the interests of people and planet. The strong connections between the anti-austerity and environmental movements were reflected in speeches at the rally, linking public sector cuts and job losses with climate change. A day long conference inspired by Naomi Klein’s book will take this debate further in three weeks time in London.

This was an important day for the British climate movement. Now, plans are underway for further protests in Paris during the crucial climate talks in December 2015. Speaker after speaker, from Naomi Klein and Green MP Caroline Lucas to activists from Bangladesh and France, urged us to spend the coming months building a stronger and more powerful movement.

The movement that had stalled in the wake of the disappointment of climate talks in Copenhagen 2009 was back on the streets. It feels bigger, stronger and more confident. This was a demonstration that may have changed everything.