In ‘Poison Spring’, an insider documents the culture of fraud and corruption that infests the U.S. Environmental Protection Agency and endangers the lives of millions

An insider documents the culture of fraud and corruption that infests  the U.S. Environmental Protection Agency and endangers the lives of millions 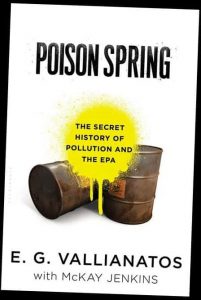 POISON SPRING
The Secret History of Pollution and the EPA
by E.G Vallianatos with Mckay Jenkins
Bloomsbury Publishing, April 2015

Twenty years later, he would drop a rubber ring into a glass of ice water to show a panel of clueless rocket experts how willful ignorance of basic temperature effects likely caused the Challenger shuttle disaster (1).

Experts with delusions of certainty create imitative forms of science, he warned, producing “the kind of tyranny we have today in the many institutions that have come under the influence of pseudoscientific advisors.” (2)

Feynman’s warning against faith in the phony trappings of “cargo cult science” fell on deaf ears. Policies affecting every aspect of our lives are now based on dangerous forms of ignorance.

A prime case in point is the noble edifice of the U.S. Environmental Protection Agency, where a high-ranking EPA official was recently jailed and fined for collecting pay and bonuses for decades of non-existent work while he claimed to be working elsewhere for the CIA. Such long-standing fraud would hardly come as a surprise to Evaggelos Vallianatos, who toiled for a quarter of a century in the EPA’s Pesticide Division, ostensibly responsible for protecting human health and the environment from commercial poisons. His new book, Poison Spring: The Secret History of Pollution and the EPA, documents a culture of fraud and corruption infesting every corner and closet of the agency.

The EPA, created with much fanfare by Richard Nixon in 1970, was an agency crippled at birth by inadequate funding, political hypocrisy, and laws protecting industry profits above all. Vallianatos points out that one of the fledgling agency’s greatest handicaps was its initial staffing with personnel from USDA, steeped in the religion of corporate agriculture and lethal technologies. With USDA staff came also USDA’s outdated pesticide registrations, which were to be reviewed and reregistered by EPA. In addition, hundreds of new pesticide applications accumulated every year, each supported by industry-produced safety studies to meet new federal requirements. Hired as scientists, EPA staffers spent their time cutting and pasting industry studies and conclusions into rubber-stamped registration approvals. Under industry-crafted laws, once a pesticide was registered, it could never be unregistered without massive, unequivocal evidence of harm.

As if such misuse of science weren’t bad enough, audits by FDA and EPA soon found that most of the thousands of industry safety studies used to approve pesticide registrations were fraudulent. Alerted by FDA scientist Adrian Gross, EPA had discovered in 1976 that Industrial BioTest Laboratories [IBT], which had conducted many of the pesticide safety tests submitted to EPA by manufacturers, had been routinely faking tests, falsifying data, and altering results for years. Subsequent investigations of other testing laboratories found similar practices in more than half the labs whose tests supported EPA registrations of pesticides.

“IBT was not a unique case of scientific fraud,” Vallianatos writes, “it was emblematic of a dark and deviant scientific culture, a ‘brave new science’ with deep roots throughout agribusiness, the chemical industry, universities, and the government.” (3)

In 1979, during the seven years of EPA dithering over this scandal, Vallianatos came to work at EPA. He soon learned that not a single pesticide registration was to be canceled due to fraudulent or nonexistent test data. Instead, he notes, EPA’s reaction was to outsource science. It shut down its own testing laboratories, closed its own libraries of toxicity data on thousands of chemicals, and outsourced all evaluations of industry-sponsored studies. “The unspoken understanding in this outsourcing of government functions has been the near certainty of finding industry data satisfactory – all the time.” This issue is relevant today, given that chemicals such as 2,4-D and glyphosate (Roundup™), whose uses have been vastly increased by GMO practices, were originally registered on the basis of invalid IBT studies.

During Vallianatos’s first year at EPA,1980, some 1.1 billion pounds of pesticide active ingredients were applied to U.S. food crops, a number that does not include home and garden uses, parklands, golf courses, playing fields, and municipal landscapes. In 2011, two billion pounds of pesticides were sold in the U.S. Most if not all of those pesticides lacked valid testing data then, and still lack such data today. Furthering the fraud, Vallianatos points out, the active ingredient is only the tip of the iceberg, being as little as one percent of the product; the remainder is a trade secret stew of untested, unknown “inert” ingredients that are often more toxic than the active ingredients. What he calls “The Big Business of Fraudulent Science” has replaced even the semblance of environmental protection.

Poison Spring chronicles some of the consequences of that fraud in an agency snared in its own tangled lies: cover-ups of dioxin levels in drinking water and in dead babies; routine suppression of data linking pesticides to soaring rates of cancer, birth defects, and chronic disease; industry access to everything; “revolving door” administrators serving corporate bosses; political appointees dismantling EPA labs and data libraries to dispose of damaging evidence; the cutting of research funds for nontoxic alternatives; the harsh retribution visited on whistleblowers; and ever and again, bureaucrats, with full knowledge of the consequences, setting policies that result in death and suffering. For 25 years, Vallianatos saw and documented it all.

“EPA officials know global chemical and agribusiness industries are manufacturing science,” Vallianatos writes. “They know their products are dangerous…. [EPA] scientists find themselves working in a roomful of funhouse mirrors, plagiarizing industry studies and cutting and pasting the findings of industry studies as their own.”

“This entire book is, in a sense, about a bureaucracy going mad,” Vallianatos adds.

Bureaucracy does not go mad by itself, however. Public indifference to the ignorance of experts and public tolerance of lies are what allow such madness to flourish, enabled by the scientific community’s silence. Inexorably, Vallianatos found, “science and policy themselves have been made a prop to the pesticides industry and agribusiness.”

“Traditional (and often organic) farmers – until seventy-five years ago, the only farmers there were – are slowly beginning to make a comeback. They have always known how to raise crops and livestock without industrial poisons,” Vallianatos points out. “They are the seed for a future harvest of good food, a healthy natural world, and democracy in rural America – and the world.”

These are facts, and this is a book that scientists and citizens alike ignore at great peril.

(1) See his account of the investigation into the Challenger disaster in What Do You Care What Other People Think? By Richard P. Feynman, 1988.

(2) Richard Feynman, What is Science? Presented at the fifteenth annual meeting of the National Science Teachers Association, 1966 in New York City, and reprinted from The Physics Teacher Vol. 7, issue 6, 1969, pp. 313-320 by permission of the editor and the author.

(3) For more information about the extent of this lab fraud, see A Bitter Fog: Herbicides and Human Rights, by Carol Van Strum, 1983, revised 2014 with full texts of Peter von Stackelberg’s exposé of the issue in a new appendix.