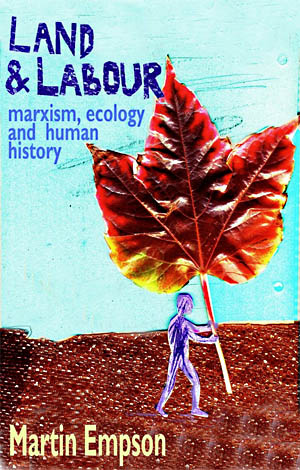 With several serious global environmental crises bearing down on us, the question of our age must be “what can we do?” Martin Empson urges us to look into the past and into the future for answers in his new book Land and Labour. His message is that human destruction of its environment is not inevitable, although it is very likely if we don’t draw upon the best and worst examples from humanity’s diverse experience.

He writes: “At every moment in human history our ancestors have simultaneously relied on and altered the natural world around them. The ways in which they have done this demonstrate our resourcefulness and intelligence. The ways in which those societies have organised, why some failed and some developed further, contain lessons for us today as we face our greatest environmental threat.”

A highlight of Land and Labour is its fascinating discussion of agriculture. Empson surveys how it has evolved throughout human history up to the modern era, provoking huge environmental and social changes along the way. The earliest agricultural communities emerged in several different regions between 10,000 to 5000 years ago out of egalitarian hunter-gatherer bands, many of which had long practiced forms of seasonal planting.

The increase in food yields that resulted laid the basis for the rise of the first class-divided societies in Egypt, India, China, Central America and the Middle East. It also paved the way for the emergence of restrictive gender roles and the subordination of women in these societies. This early agricultural revolution favoured permanent human settlements, which in turn encouraged the development of new skills such as pottery, metal-working and the domestication of animals.

Other early farmers developed complex methods of slash-and-burn (or “swidden”) agriculture, which helped maintain soil fertility. Not to be confused with modern-day deforestation, slash-and-burn farmers rotate their plots often, allowing farmed areas to grow back.

Thousands of years of farming has reshaped the natural world considerably. Many of the seemingly wild landscapes we admire today for their “natural” beauty are in fact products of past human activity.

The rise of modern industrial farming displaced earlier, more sustainable agrarian systems that practised communal forms of land ownership. Demanding huge inputs of oil, energy, water and chemicals, capitalist agribusiness has become a grave ecological menace. “Rather than agriculture becoming more rational as scientific understanding has increased we find a food system which has failed to develop large-scale sustainability and fails to deliver food to the hungry, while producing enormous wealth for a small number of corporations.”

Empson does not make the comparison himself, but parts of  Land and Labour  can be read a response to the work of  Jared Diamond, especially his book Collapse: How Societies Choose or Fail to Survive. Diamond’s book looks at the environmental influences behind the demise of several civilisations: from the ancient Mayan empire and the Polynesians of Easter Island, to the lost medieval Norse colony in Greenland.

Critics have challenged Diamond’s narrative, citing contrary historical evidence. But his biggest weakness is his misunderstanding of the causes of today’s environmental problems, which are presently disrupting natural life support systems not in just one region, but across the planet. He said the interests of environmentalists and profit-maximising energy firms don’t have to be opposed, but can be made to coincide. He warned against blaming mining and logging companies for their actions, saying the apathetic “public has the ultimate responsibility for the behaviour of even the biggest businesses”.

Diamond argued that past societies that failed to change course had ensured their own decline. Yet he ended Collapse on a feeble note, urging minor reforms to capitalism-as-usual.

By contrast, Empson’s book draws attention to the historical and social roots of past and current ecological crises. It explores not just the periods of change between different modes of production, such as the transition from feudalism and capitalism, but also the ecological and social devastation brought about by collisions between very different societies, such as the European invasion of the Americas.

Land and Labour crowns this history with an argument about the grave ecological impacts of the present-day capitalist system: a system that alienates working people from one another, from the products of their labour, from the natural/social process of labour itself and from the wider natural world of which they are an intrinsic part.

Empson writes: “Nowhere in the world has escaped the destruction wrought by this economic system. From the highest mountains to the depths of the oceans, from the deserts to the atmosphere itself, capitalism is destroying the planet.”

His argument takes the discussion beyond the partial answers offered by those who say our ecological problems are due to the rise of industrial societies powered by fossil fuels, or say that environmental decay results from the wrong-headed pursuit of endless growth. Empson says “the scale of the environmental problems caused by capitalism is not simply to do with technology, nor just because capitalism is a world-wide system, but is rooted in the particular way that production is organised for profit”.

Its inherent drive for accumulation and profit means capitalism produces prodigious amounts of waste and wastes prodigious amounts of energy. It means those that benefit most from the system are compelled to defend and expand its destructive activities, even though this will lead to disaster. And it means the system produces people conditioned to think of capitalism as natural and of nature as capital.

Empson stresses that Land and Labour is not an attempt at a complete history of the human relationship with nature, but the book is strikingly ambitious nonetheless. Its discussion ranges from the irrigation methods of ancient Egypt and the social relations of the Montagnais-Naskapi indigenous people of north-eastern Canada, to the ecological issues associated with the modern city and a vision of a sustainable, post-capitalist society.

Land and Labour succeeds in drawing these many examples together into a readable and stimulating whole., an important and insightful contribution to the growing movement for ecosocialism, which says we must fundamentally change human society if we are to preserve it.

Simon Butler is a member of the Socialist Alliance in Sydney, Australia. He is co-author, with Ian Angus, of Too Many People? Population, Immigration and the Environmental Crisis.