Break the power of food corporations. Establish a constitutional right to food. Build food sovereignty from below, based on small scale farming and agroecology, not industrial agriculture

Break the power of food corporations. Establish a constitutional right to food. Build food sovereignty from below, based on small scale farming and agroecology, not industrial agriculture 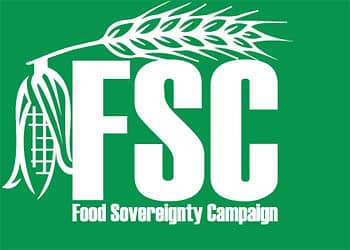 At a historic Food Sovereignty Assembly, from 28th February till 1st March 2015, over 50 organizations representing the hungry, the landless and the exploited of our country – involved in agrarian, water and land transformation, environmental justice, small scale farming, cooperatives, the solidarity economy movement, waste pickers, the unemployed and activists campaigning against increasing food prices – gathered in Johannesburg to plan the initiation of the South African Food Sovereignty Campaign and Alliance.

We came together at the Assembly through our shared understanding that we have a crisis-ridden corporate and globalized food system that is responsible for worsening social, health and climate challenges, and which is coinciding with increasing state failure in relation to regulating our food regime and ensuring much needed agrarian transformation.

Moreover, the climate crisis is worsening, without any genuine solutions coming to the fore from the South African state, the corporate-controlled food system and the United Nations. Climate shocks are already impacting negatively on our food system with volatile food prices, droughts, heavy rainfall and flooding. This necessitates advancing food sovereignty, to ensure our food and water needs are not compromised and ordinary citizens have the means to meet food production and consumption needs on their terms in the midst of the climate crisis.

South Africa is also experiencing food riots often times linked to ‘service delivery protests’, 14 million citizens experiencing hunger, malnutrition, obesity, desperation by aspirant small scale farmers, claims for justice by the landless, increasing precarity of farmworkers, and restricted marine rights for small scale fishers. The Food Sovereignty Assembly affirmed the need to directly confront these challenges through a unifying national campaign. Such a struggle-driven national Food Sovereignty Campaign is unprecedented in the context of South Africa and has drawn inspiration from local food sovereignty practices and from the rising international movements and alliances championing food sovereignty in different parts of the world, in particular La Via Campesina and the Alliance for Food Sovereignty in Africa.

Our campaign seeks to unify struggles on the ground and progressive social forces to ensure food sovereignty is placed on the national agenda and is an alternative way forward for our food system. We are not simply calling for technical solutions for households to access food as encapsulated in the government’s recently proposed Food Security and Nutrition Policy and Implementation Plan. We reject the latter and instead are calling for the deep transformation of our food system by breaking the control of food corporations, repositioning the state to realize the Constitutional right to food and as part of creating the conditions and space for the emergence of food sovereignty alternatives from below. In this context mass popular power is essential and hence we welcome the message of support from the NUMSA-led United Front.

The campaign will challenge the current unjust, unsafe, and unsustainable food system that is dominant in South Africa. We will be guided by a program of action consisting of phases of rolling action to confront the key contradictions of our food system, namely rising food prices and corporate control, declining nutrition, increasing use of GMOs and corporate control of seeds, lack of land, water, and agrarian reform, destructiveness of industrial agriculture, labor exploitation on farms, and lack of finance for small scale farmers and cooperatives.

To build food sovereignty we need to (1) challenge the country’s unequal agrarian structure; (2) call for land audits at local, provincial and national levels; (3) secure land allocations for food sovereignty in villages, towns and cities; (4) win society over to the idea of one farmer-one farm; (5) end the conversion of agricultural land to game farms for the rich; (6) call on churches that own large amounts of land to make it available to the landless (7) struggle against chiefs that stand in the way of land usage, distribution and food sovereignty; and, linked to this, (8) push for and affirm the rights of women to land, the people who produce most of the world’s food.

We will address various demands to capital and the state and we will use our power in our communities, in our farming enterprises, cooperatives, in the streets, and through international solidarity.

Advance food sovereignty from below

In response to the contradictions of the food system, as manifested in our widespread hunger, we have answers! We believe that small scale farmers, cooperatives, community markets, as part of the solidarity economy, can feed our people, and through the campaign we will promote and highlight practical examples of this. We will highlight and promote the building of seed banks and the defense of local seed systems to ensure that we as farmers and communities control our seed, and therefore life. Through our experiences we will show that agroecology rather than industrial agriculture can feed our communities and country, and nourish our environment. We will highlight, promote and celebrate existing agroecology production that is happening in the country, and conduct learning exchanges to these sites.

We will experiment with and develop alternative forms of finance that are controlled by small scale farmers and cooperatives themselves, including solidarity economy funds and localized saving schemes for productive investment in food sovereignty alternatives. We will champion farmworker rights and models of worker cooperatives in production and consumption to develop worker control in agriculture and the food system. We will uncover, revive and highlight traditional, indigenous and healthy nutrition alternatives that are grounded in local ecologies, cultural tastes, and diversity. A recipe book will be developed to promote these nutritious alternatives.

We will map and link small scale farmers, cooperatives and communities to bring about agrarian transformation and build critical mass. Social media like a food sovereignty app and the Food Sovereignty Campaign webpage will be utilized in this regard to mobilize societal support.

We will hold food sovereignty festivals to celebrate our local practices of seed sovereignty and preservation, indigenous plant varieties, arts, crafts and culture, local foods and produce from cooperatives, solidarity economy enterprises and small scale farmers. Such festivals will also serve as socialized markets, learning spaces, and communication tools in our society.

To affirm the Constitutional right to food in our society and to shift state power in favour of food sovereignty and to regulate capital, we will champion a Food Sovereignty Act that can control food prices, provide protections to small scale farmers and cooperatives, ensure a socialized market space in the national economy (through, for example, labelling food sovereignty products and proper nutrition labelling of all food ), create participatory mechanisms for food producers and consumers to shape the food sovereignty system, de-concentrate the agrarian structure of South Africa, ensure one farmer one farm, enforce nutrition standards, protect indigenous seeds, plant varieties and the free sharing of seed, and ensure South Africa becomes GMO free by banning GMOs. We will challenge the property clause to ensure access to land. In addition to the Act, we will pursue the implementation of local government regulations and policies to promote the development of food sovereignty. To achieve this we will research international experiences, draft and champion these instruments from below.

We will champion disciplined and commonly agreed actions that coincide with:

The FSA elected a representative coordinating committee from the various sectors championing food sovereignty. This committee will coordinate the campaign, facilitate grassroots-driven actions, build capacity and communicate the message of the campaign. The coordinating committee will work in accordance with the principles agreed to at the Assembly and in a manner that builds the Alliance across the country, in various sectors and in communities in a bottom up and democratic manner.

We give a mandate to the coordinating committee to develop and finalize the program of actions for the priority campaign themes for 2015, namely high food prices and lack of land and agrarian reform, with input from grassroots Alliance partners.

If the media would like to arrange an interview or further communication, please contact Andrew Bennie 072 278 4315 / bennieand@gmail.com